We looked at the charts of Plug Power (PLUG) on Dec. 23 and warned that "Bullish traders will probably go on about how Congress passed the alternative fuel tax credit and what it could mean for stocks like PLUG, but this news could be discounted already in the price action. If you really believe that PLUG can leap still higher I recommend a sell stop at $31, but otherwise I would consider booking profits and significantly reduce your long exposure."

The shares continued higher into January but the strength did not last long.

Let's check out the charts Thursday as traders react to their latest EPS numbers, etc.

In the updated daily bar chart of PLUG, below, we can see that the shares stalled out in January and the first half of February. Prices turned lower quickly and are now trading below the cresting 50-day moving average line. Even with the decline prices are still extended above the rising 200-day line which intersects down around $22 or so.

The On-Balance-Volume (OBV) line has been rolling over since the middle of January telling us that sellers of PLUG have quietly become more aggressive. The Moving Average Convergence Divergence (MACD) oscillator is crossing the zero line for an outright sell signal.

In the weekly Japanese candlestick chart of PLUG, below, we can see the upper shadows in January and February as traders rejected those highs.
The weekly OBV line is weakening and the MACD oscillator has been narrowing for several weeks.

In this daily Point and Figure chart of PLUG, below, we can see that the shares have met a downside price target.

In this weekly Point and Figure chart of PLUG, below, we can see that the software is projecting a price target of only $7. I probably am not that bearish on this stock but I am not going to argue with the direction which is down. 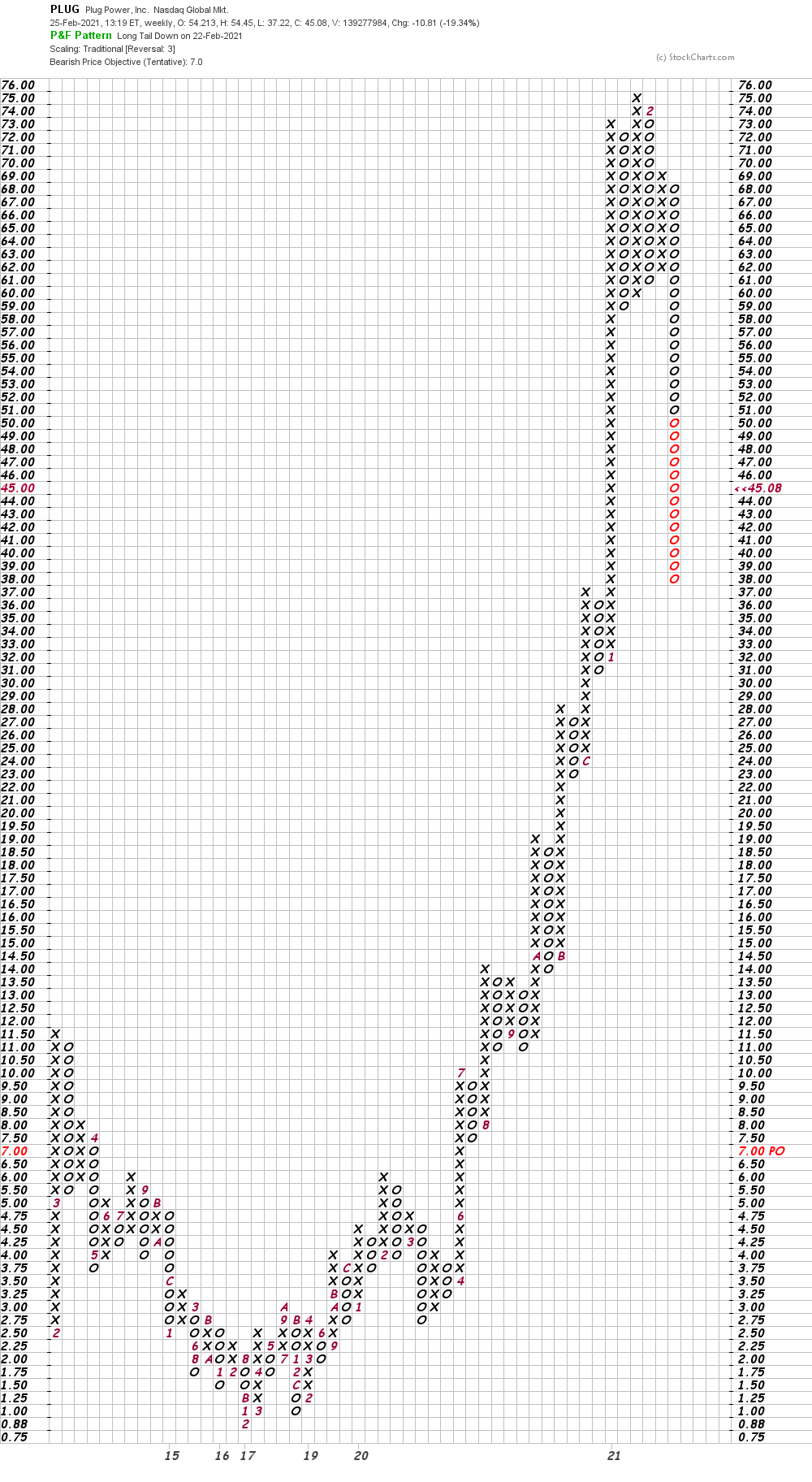 Bottom-line strategy: In hindsight I recommended getting out a few days too early. I can live with leaving some money on the table cause it feels good to have no position when prices are sinking rapidly. Continue to stand aside.
Get an email alert each time I write an article for Real Money. Click the "+Follow" next to my byline to this article.
TAGS: Earnings | Investing | Stocks | Technical Analysis | Automotive | Energy | Transportation