During Monday's Mad Money program host Jim Cramer told viewers that Planet Fitness (PLNT) was one of the last fitness players still standing, meaning it was going to benefit from smaller gyms that had closed during the pandemic.

When we looked at PLNT back on Jan. 6 we wrote that, "People may be returning to their favorite gyms but the charts of PLNT suggest a decline in the weeks ahead. Take your pulse and stand aside for now." Prices declined into the end of January but made a recovery in February.

Let's check the pulse of the charts again.

In this updated daily bar chart of PLNT, below, we can see choppy trading the past three months. PLNT has traded between $72 and $90, crossing below and above the 50-day moving average line.

The On-Balance-Volume (OBV) line shows uneven weakness from early January telling us that there is an up and down trend towards more aggressive selling. The Moving Average Convergence Divergence (MACD) oscillator has been crossing the zero line a number of times -- not the picture of strength.

In this weekly bar chart of PLNT, below, we see a mixed picture. Prices are in an uptrend above the rising 40-week moving average line.
The weekly OBV line has stalled out the past four months and the MACD oscillator is above the zero line but the two moving averages are "hugging" each other and could eventually turn lower.

In this daily Point and Figure chart of PLNT, below, we can see a potential upside price target in the $109 area. Note, however, that prices are below a breakout point. 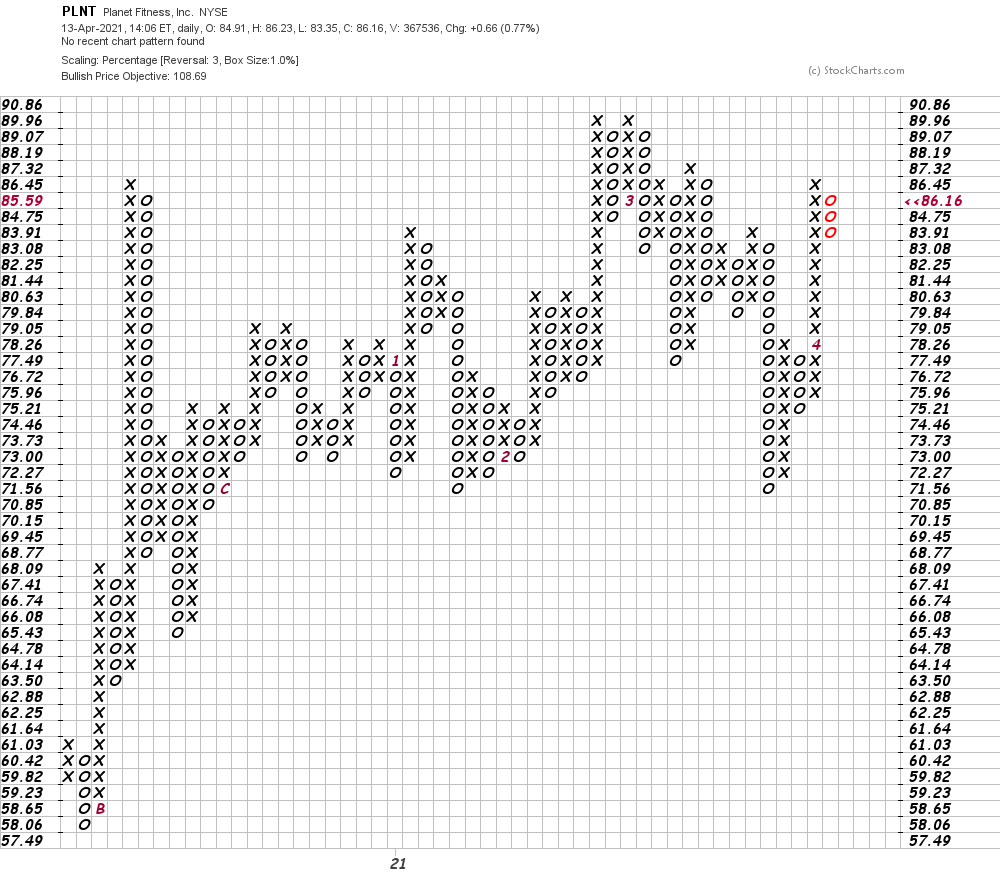 Bottom-line strategy: There is a Planet Fitness in the local mall near my house. Some members have come back but I believe attendance is well below its best levels of 2019. I know this is just an unofficial survey on just one location but I think it is worth sharing. I would not be in a rush to purchase PLNT right now.
Get an email alert each time I write an article for Real Money. Click the "+Follow" next to my byline to this article.
TAGS: Investing | Stocks | Technical Analysis | Mad Money | Consumer Discretionary | Sports

Is ViacomCBS Stock Broken? I Don't Think So - Here's My Plan

VIAC's first quarter performance knocked the cover off of the ball.

On PagerDuty, I'm Getting a Bearish Message

The charts and indicators of PD are pointed lower