Rondeau said it's still early in the recovery but it's important that people get back to their fitness routines and that's what they're starting to do. Planet Fitness lost nearly one million members at the onset of the pandemic, but the decline has slowed since then and other than members wearing masks, Rondeau said, "it's starting to feel like normal."

When asked how Planet Fitness could have a market cap of $6.4 billion while home fitness sensation Peloton Interactive (PTON) is valued at $43 billion, Rondeau said that while Peloton is all the rage at the moment, he's betting on Planet Fitness.

Let's check out the charts of PLNT to see if they are the rage or not.

In this daily bar chart of PLNT, below, we can see some clues on PLNT's next exercise. Prices spiked higher in November and then quickly retreated, suggesting that recent longs are not long-term holders. Prices then recovered a bit into December but have stalled short of the November zenith. PLNT is poised to test/break the rising 50-day moving average line. Trading volume has shrunk from November to December, telling me that new longs are not being attracted. The On-Balance-Volume (OBV) line, which is driven by simple math, has stalled and looks soft. A weakening OBV line will tell us that sellers of PLNT have become more aggressive. The Moving Average Convergence Divergence (MACD) oscillator is pointed down toward the zero line.

In this weekly Japanese candlestick chart of PLNT, below, we can see a large upper shadow in November and smaller upper shadows in December as traders rejected the highs. The 40-week moving average line is pointed up but the weekly OBV line is pointed lower. The MACD is above the zero line but it has been narrowing in recent weeks, telling us the strength of the trend is fading.

In this daily Point and Figure chart of PLNT, below, we can see a potential downside price target in the $66 area. 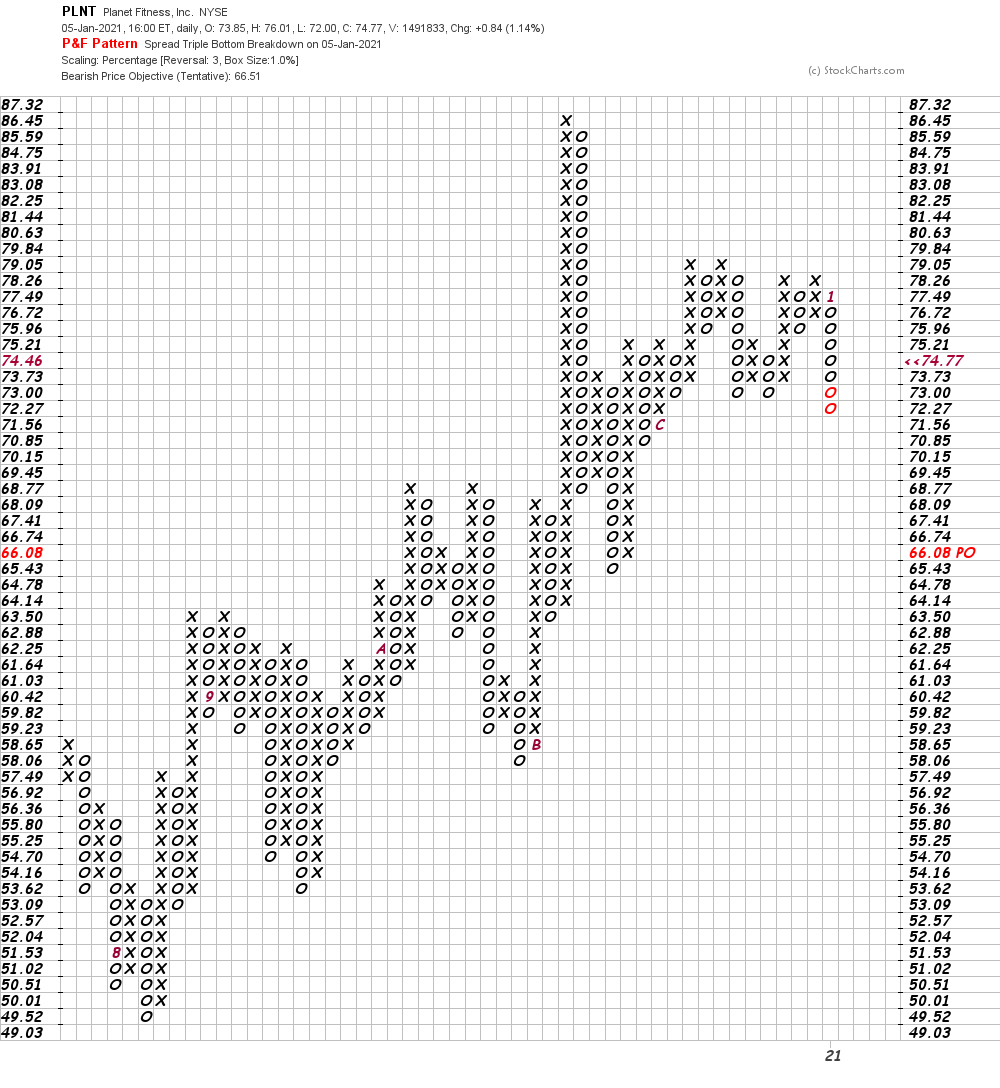 Bottom line strategy: People may be returning to their favorite gyms but the charts of PLNT suggest a decline in the weeks ahead. Take your pulse and stand aside for now.

Get an email alert each time I write an article for Real Money. Click the "+Follow" next to my byline to this article.
TAGS: Investing | Stocks | Technical Analysis | Health Care Equipment & Services | Mad Money | Executive Interview | Real Money | Consumer Discretionary