The ride is maddening. Yet, I always look for the Irish figures... and the cowboy.

I'm talking about "It's a Small Word," of course.

Walt Disney World has long been a favorite vacation retreat for your author. But discipline demands that we never, ever fall in love with a stock. Therefore, we never do. That said, I am a Walt Disney Company (DIS) shareholder, and I have been on and off (far more on than off) throughout my life.

They say that the things that you see and hear as a youth impact the way you process information for the rest of your days. Perhaps that's true.

I can't remember the year, but I was young. We were on line, waiting for our chance to purchase some overpriced fast food, I think in Frontierland. My Dad, some of you remember him as "The Colonel," put his hand on my shoulder, and stated quite simply, "Son... this place is a cash machine."

Really? Why would I do that? Simple, sports fans. The game we play when boiled down, is one of trying to buy shares when they look cheap, and sell them when they are expensive.

Well, unless you live in a cave, you know that Disney is running a high-profile "investor day" event tomorrow (Thursday). You likely also know that the stock has been especially strong for about three weeks, as a number of sell-side analysts have made positive comment on the name.

Event headlines will almost certainly feed off of the company's coming launch of the "Disney +" streaming service that will be available to consumers at some point this year. We already know that Disney is the "king of content," and will be adding additional programming to this platform as well.

CEO Bob Iger has told us in the past that Disney + will be priced at a discount to Netflix (NFLX) . Did you just get the onscreen notice that Netflix was raising their prices? I did too. I agreed to the increase. For now.

I've got to say that once I am paying for Disney +, Amazon Prime, Hulu, and Netflix, I am going to drop somebody. And it's not going to be Disney or Amazon (AMZN) .

Hulu has some programming that I really like, and it's less than half the price of Netflix. I would say that for me as a consumer, Netflix is on extremely thin ice. Oh, Disney is now the largest percentage owner of Hulu as well.

Second, Disney just acquired much of the content assets of Fox just last month. There will have to be an update on the integration of those assets into the Disney empire.

There will also be updates on the movie studios and the development of the theme parks and vacation properties. These items are all costly. The old adage that you have to spend money to make money rings true for a large company operating the types of businesses that Disney does.

Much is made of the experiential economy. This is key. Can you think of another company better positioned long-term to thrive in such an environment? Marvel. Star Wars. Cruise lines. Parks. Hospitality...and ultimately, streaming entertainment. Now, that's a line up.

What They Are Thinking

-- Rosenblatt initiates with a "Buy" rating and a $150 price target.

-- Goldman Sachs reinstates with a "Buy" rating and a $142 price target.

Why I Do What I Do

Let me try to explain. I sold 25% of my holdings at a high price ahead of an event where future productive businesses that cost present dollars will be highlighted. That's because I am a trader. I had / have something to protect.

I remain long 75% of my shares. Why? Because, I am also an investor. I know that I want to be long this name.

Should Disney shares pop in reaction to "Investor Day," I will celebrate. Should the shares come in due to softer guidance on profit margin, then I will buy back those shares at a discount. Either way, I can tell myself how smart I was. See how that works for us Wall Street types? 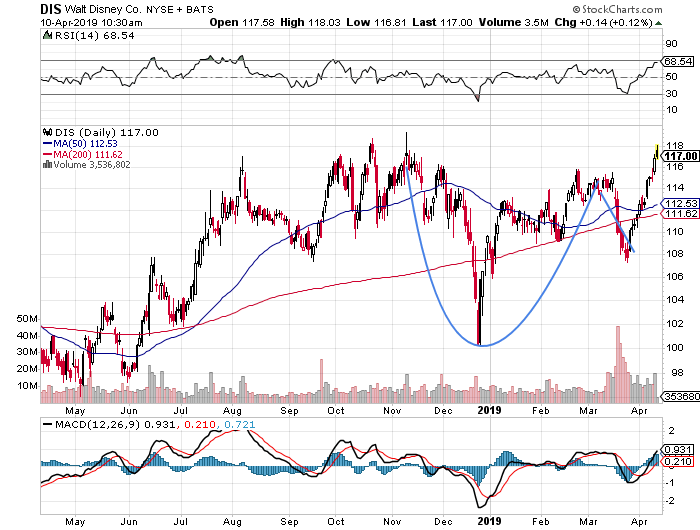 Disney's chart is not pretty, but there is a sloppy cup and handle visible. There certainly is a handle followed by something of a breakout. The breakout remains intact as far as I am concerned as long as the shares find support between $115 and $116. That's your pivot here. I think as long as price develops in that way, the stock reach the high $130s, conservatively.

Disney and Amazon are holdings in Jim Cramer's Action Alerts PLUS member club. Want to be alerted before Jim Cramer buys or sells these stocks? Learn more now.