The fast-paced Lightning Round segment of Mad Money is a viewer favorite. This is when a few lucky callers can get to ask host Jim Cramer about securities that they are interested in. On Tuesday's show, one caller asked him about Pitney Bowes (PBI) . "Whoa. no thanks," was Cramer's curt response.

Let's check out a few charts on Pitney Bowes.

In the daily bar chart of PBI, below, we can see that the shares made a very steep and short-lived rally in January. PBI has since declined to give back the bulk of the rally. The downtrend is still ongoing as prices have broken below the May lows. PBI trades below the declining 50-day and the cresting 200-day moving average. We can also see a bearish dead or death cross earlier this month as the 50-day average line crossed below the 200-day line.

The On-Balance-Volume (OBV) line had a brief rise in January but has since only moved lower, telling us that sellers or PBI are more aggressive. The Moving Average Convergence Divergence (MACD) oscillator has been below the zero line for much of the past 12 months.

In the weekly Japanese candlestick chart of PBI, below, we see a bearish picture. Prices are in a downtrend and trade below the declining 40-week moving average line.
The weekly OBV line has been pointed down the past three months or so and the MACD oscillator has fallen below the zero line for an outright sell signal.

In this daily Point and Figure chart of PBI, below, we can see the downtrend in place. A price target on the downside has been reached and exceeded.

In this weekly Point and Figure chart of PBI, below, a price target of $5.00 is being projected. Weakness under $5 will tend to deter institutional accounts. 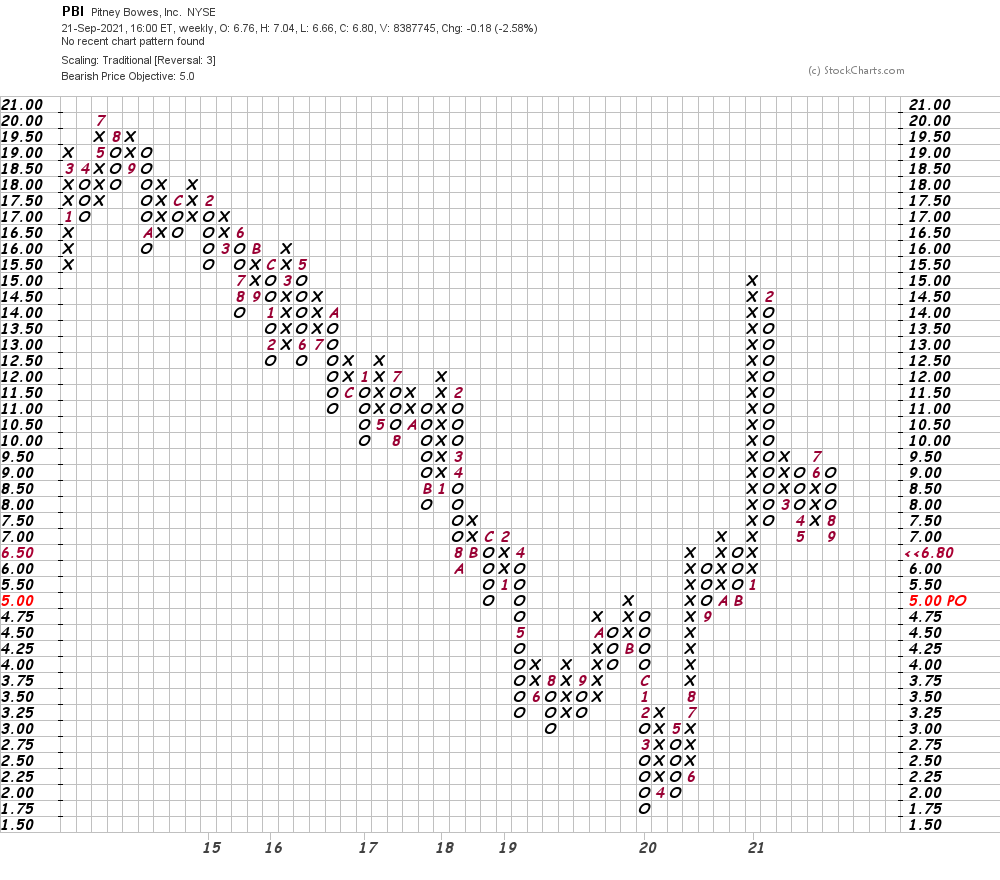 Bottom-line strategy: I have no idea why PBI soared and then crashed in January but the charts and indicators tell me not to expect a repeat. Avoid the long side of PBI.
Get an email alert each time I write an article for Real Money. Click the "+Follow" next to my byline to this article.
TAGS: Investing | Stocks | Technical Analysis | Financial Services | Software & Services | Mad Money