Monaco explained that a lot has changed at Enbridge over the past four years. He said his company delivers critical energy to the best markets in North America and it does so with a focus on safety and reliability. Enbridge is providing predictable cash flows that it's putting to work in the ground and also returning to shareholders. The balance sheet is in great shape as well, he added.

The company has pledged to reach net-zero emissions by 2050. When asked about their environmental targets, Monaco said that as a pipeline operator, Enbridge is not a huge carbon emitter, but it will still take an "all of the above" approach to achieve the net-zero goals.

As for the price of natural gas, Monaco admitted he is worried about pricing in the Northeast going into the winter months. He said natural gas isn't connected globally, as is oil, which means the Northeast is in for higher prices as our current infrastructure struggles to keep up with demand.

Let's check out the charts of ENB.

In the daily bar chart of ENB, below, we can see that the shares have made, I believe, a high-level consolidation pattern around $40. Prices have traded sideways since early May and dips into the $38 area have all been bought. ENB is trading above the rising 50-day and the bullish 200-day moving averages.

The On-Balance-Volume (OBV) line has been steady since June and suggests a balance between bulls and bears. The Moving Average Convergence Divergence (MACD) oscillator has been crisscrossing the zero line the past three months.

In the weekly Japanese candlestick chart of ENB, below, we can see that the shares have yet to break out over the highs of early 2020. Lower shadows below $38 support the idea that the consolidation pattern is bullish. ENB is trading above the rising 40-week moving average line so the math tells us that the longer-term trend is up.

The weekly OBV line shows a slight downward drift since May suggesting some selling but prices have held up well. The MACD oscillator has been correcting lower but the two moving averages that make us this indicator have been narrowing and that could mean a new buy signal in the weeks ahead.

In this daily Point and Figure chart of ENB, below, we can see an upside price target of $46. 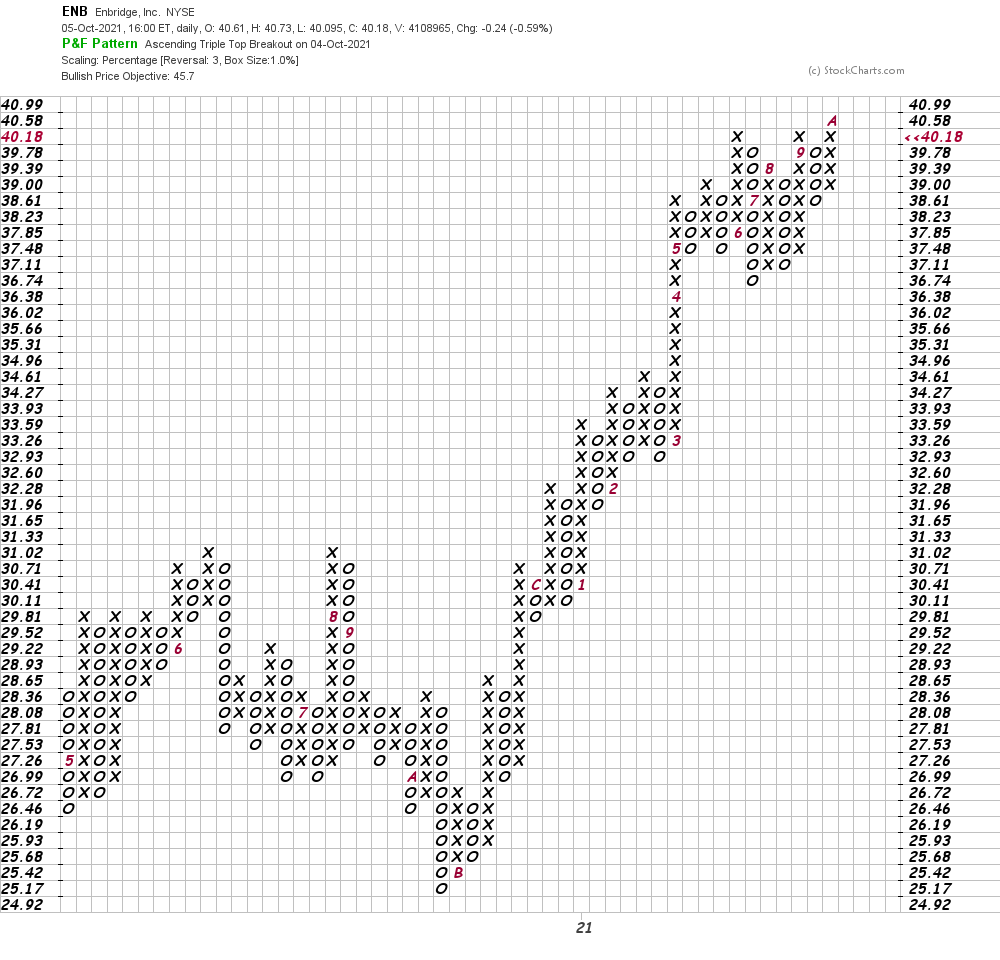 In this weekly Point and Figure chart of ENB, below, we can see a potential price target of $68. A trade at $41 will refresh the uptrend. 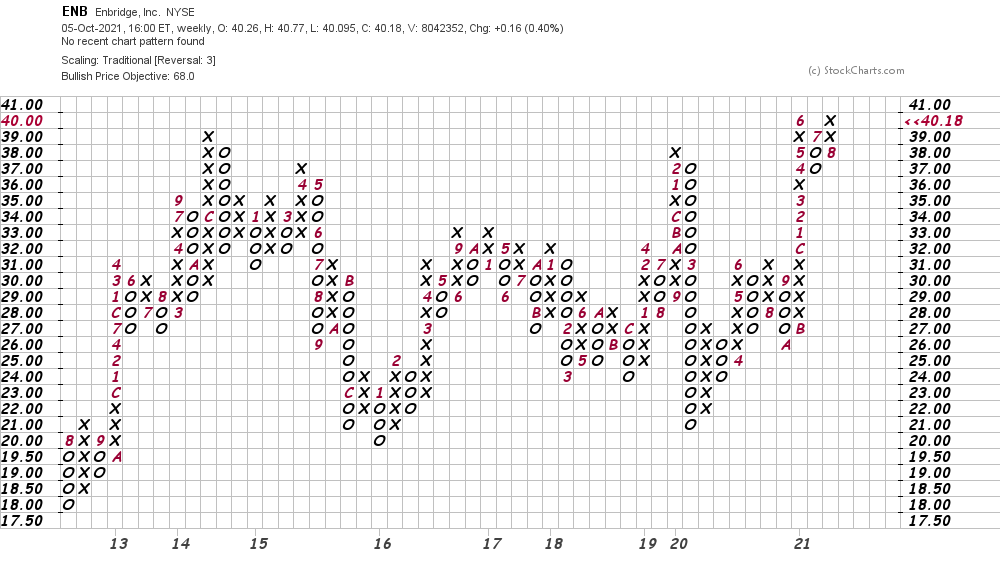 Bottom-line strategy: The charts and indicators of ENB are bullish so traders could approach the long side of ENB. Use a stop below $38 for now. Add to longs above $41. Our 2022 price target is $68.

Get an email alert each time I write an article for Real Money. Click the "+Follow" next to my byline to this article.
TAGS: Investing | Oil | Stocks | Technical Analysis | Energy | Utilities | Natural Gas | Mad Money | Executive Interview