The recent market rotation has created a lot of great buying opportunities, Jim Cramer told viewers during Wednesday's Mad Money program. The opportunities include Pinterest Inc. (PINS) , which reported terrific earnings at the beginning of August but has since seen its shares erase most of their post-earnings gains.

Pinterest bills itself as a visual discovery engine and is spending money to grow its place in the social media world as a friendly, personal space to share and discover. At the same time, revenue per user is increasing, with the company last posting 88 cents per user, well ahead of analyst estimates of just 80 cents per user.

Cramer said Pinterest has a lot to like. The company has no hype surrounding it as it is very non-promotional. It's also growing its user base at a time when many other platforms have plateaued. In addition, Pinterest offers advertisers a lot of value as Pinterest users are already looking for new ideas and products. Finally, Cramer said, Pinterest is just a nice place to be, without the nastiness and controversies of other social platforms.

For all these reasons, Cramer said Pinterest is a buy, and he'd be a buyer on any weakness and would buy even more when the insider lockup period expires next month. Let's check on the charts to see what they might suggest.

In this daily Japanese candlestick chart of PINS, below, we can see the price action from the start of trading in April. We could say we see uptrends and downtrends, but the bigger picture is a sideways trading range marked roughly between $24 and $36 or so. Prices have crossed above and below the shorter 20-day and 50-day moving average lines. The On-Balance-Volume (OBV) line shows a rise from early June and not much of a decline in recent days as prices declined sharply. The Moving Average Convergence Divergence is close to crossing below the zero line for a sell signal, but we really do not have much data to work with and compare.

In this Point and Figure chart of PINS, below, we do not have any gaps and we can see that prices have met a downside price target. There is probably support in the mid-$20s, so we could see PINS move sideways in the weeks ahead. 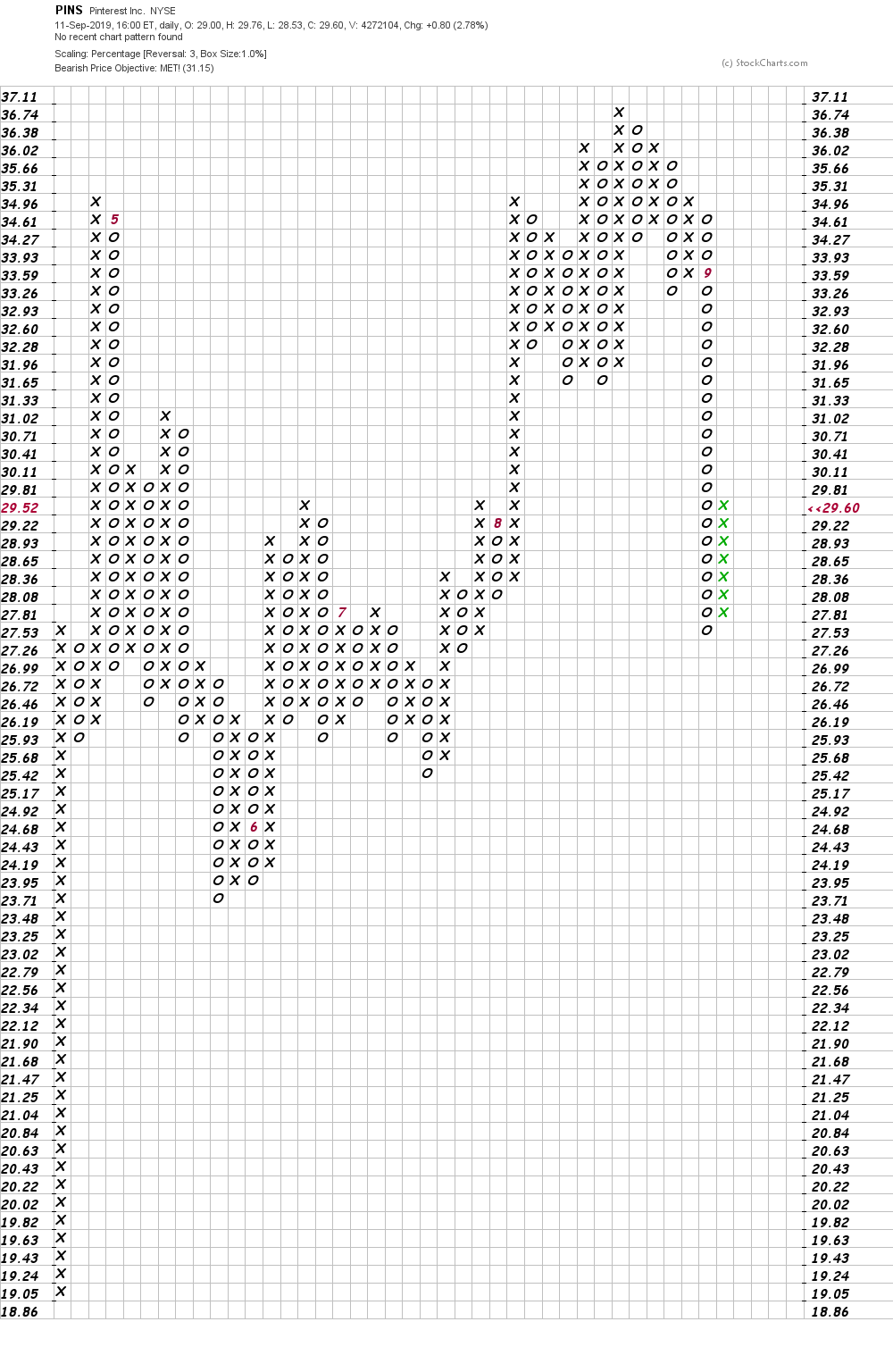 Bottom line strategy: After more than four months of trading I have no feel for the near-term direction of PINS. Put it on your shopping list and let's see how things develop.

Get an email alert each time I write an article for Real Money. Click the "+Follow" next to my byline to this article.
TAGS: IPOs | Investing | Stocks | Technical Analysis | Consumer | Media | Technology | Mad Money | Real Money