By TIMOTHY COLLINS Jun 21, 2019 | 02:27 PM EDT
Stocks quotes in this article: CGC, ACRGF
I'll start by saying I don't hate the Canopy Growth ( CGC) earnings report as much as some other folks do. That's because cannabis isn't a quarter vs. quarter story. It's a blossoming industry, still in its infancy. Results are going to be lumpy. Companies are still learning. We can discuss the relatively small growth from last quarter to this quarter, but it could easily be a supply and distribution issue more than a demand issue. I've talked to many in the industry and found sellers and dispensaries constantly talking about not having enough product on the shelves.
That said, the quarter is a little disappointing, but it is not a disaster. Bears will point to the average selling price per gram hitting $7.49 vs. $8.43 last year, but what they won't tell you is it is not an apples to apples comparison. Last year, sales were virtually all medical in nature. This year, nearly three-quarters of the fourth quarter sales were recreational. Anyone familiar with the industry knows that recreational selling prices are significantly below medical sales prices. In fact, CGC breaks it down for us:
Average recreational price per gram: $7.28
Average Canadian medical price per gram: $8.17
Average international medical price per gram: $13.91
In the the fourth quarter of 2018, the average selling price for Canadian medical was $8 per gram and the average selling price for international medical was $13.35 per gram, so those prices are up 2% and 4%, respectively year-over-year. That's the apples to apples comparison. And if we examine the average recreational price this quarter, $7.28 against the average recreational price per gram from the third quarter of $6.96, we find an increase of 4.6%.
International prices were also lower in the third quarter. Only medical prices were significantly higher in that quarter, but what I see is stability and some pricing-power, despite what the bears will have you believe.
From a revenue perspective, CGC reported $94.1 million vs. expectations of $90 million. This was an increase of 313% year-over-year, but many whisper numbers were higher and the market expects big things from the biggest of the cannabis companies. With its $10 billion market cap, a few are turning to fundamental arguments. So, despite CGC's market cap, it does have $4.5 billion in cash on the books (around $19.40 per share) and even when we subtract the recent $600 million bond, the cash value hovers around $16.80 per share. Therefore, the current business is priced closer to $25 than $40.
CGC is losing money although the $243 million in expenses against the $94 million in revenue isn't quite as bad as it looks. Roughly $103 million of that expense number is depreciation and share-based compensation. Also, CGC is aggressively expanding through acquisitions as it enters every vertical in the cannabis and hemp space. The biggest appeal has to be the entry into the U.S. CBD market, as well as its plans to acquire Acreage Holdings ( ACRGF) , one of the largest multi-state operators in the country.
It's not the financials that worry me here. It's the weekly chart. CGC has slipped below its 10-week simple moving average (SMA) and 21-week SMA. Over the past five months, price has hit a series of higher-highs and lower-lows, potentially forming a megaphone pattern. These patterns tend to be very bearish. A close today under $40 targets at $36 first, with the potential for a drop all the way to $27. I don't think we'll see a move that extreme, especially with the big cash position.
I do think a move into the mid-$30s would be an opportunity to own one of the big four cannabis names, but if you are buying today, you'll want to see an immediate bounce or else the downside-risk odds elevate. Buyers today are buying support, but should acknowledge a quick 10% downside if support fails.
In the end, while the fundamental results don't bother me, the technical picture does have me on the sidelines. 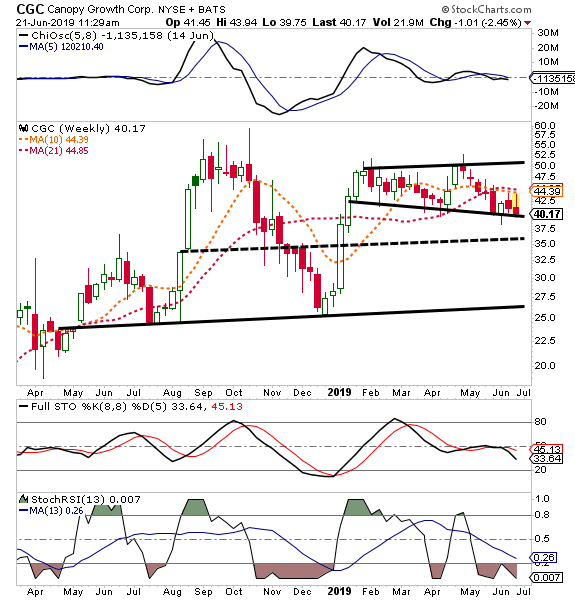 Get an email alert each time I write an article for Real Money. Click the "+Follow" next to my byline to this article.
TAGS: Earnings | Investing | Stocks | Health Care Equipment & Services | Marijuana | Cannabis