There are countless companies rushing to make a Covid-19 vaccine, but in the end we only need two or three good ones, Jim Cramer told viewers of "Mad Money" Monday.

That's why the best way to make money isn't with the vaccine makers, but rather with diagnostic and life sciences companies such as Thermo Fisher Scientific (TMO) and Danaher Corp. (DHR) . In his first Executive Decision segment of "Mad Money," Cramer added another name to the list, PerkinElmer Inc. (PKI) , after speaking with Prahlad Singh, the company's president and CEO.

Singh said when it comes to Covid-19 testing the bottleneck isn't making machines that can test for the virus, it's providing turnkey solutions that can provide results quickly. PerkinElmer has partnered with different entities, including Rutgers and Yale universities, to help bring innovations such as saliva testing and free testing to market. All these innovations still have all the diagonstic components, Singh said, and that's where PerkinElmer shines.

Let's check out the charts and technical indicators of PKI to diagnose where its shares stand.

In this daily bar chart of PKI, below, we can see that prices corrected lower from January into the middle of March but rallied back quickly. By early June prices were making new highs for the move up and for the year. PKI is now trading above the rising 50-day moving average line and a bit extended above the rising 200-day moving average line. The trading volume has been more active since early March, telling me that more traders and investors have become involved in the story and the stock.

The On-Balance-Volume (OBV) line has been rising steadily since March and tells me that buyers of PKI have been more aggressive, with heavier volume traded on days when the stock has closed higher. The trend-following Moving Average Convergence Divergence (MACD) oscillator has been above the zero line since late April but earlier this month crossed to the downside for a take profits sell signal -- a sell when the stock is in an uptrend.

In this weekly bar chart of PKI, below, we can see that prices broke out on the upside this year from a large sideways consolidation pattern. Prices are above the rising 40-week moving average line. The weekly OBV line has been in an uptrend the past three years and has made new highs this year to confirm and support the new price highs. The MACD oscillator is very bullish on this longer time frame.

In this daily Point and Figure chart of PKI, below, we can see some recent consolidation and a price target in the $152 area. 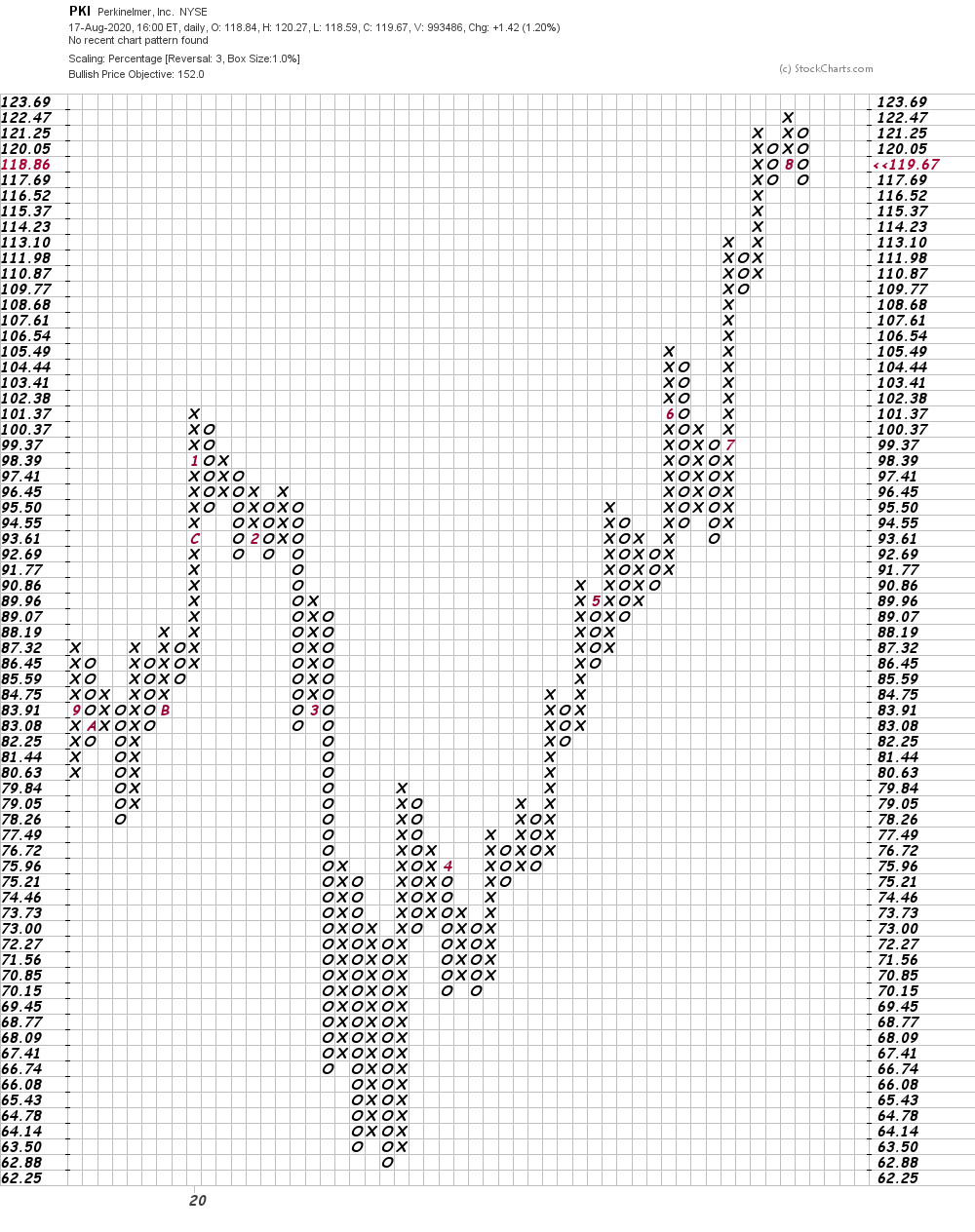 Bottom line strategy: PKI broke out of a large and bullish consolidation pattern (see the weekly chart above) and this means it can make a large upside move. We have price targets in the $152-$160 area so there is room for further gains. Traders could go long PKI around $120, risking a close below $112 for now. The $152-$160 area is our next upside price objective.