With stocks soaring Monday on positive Moderna (MRNA) vaccine news after advancing Friday, what do investors need to know?

Charts of the major equity indices remain positive, while data and valuation have increased their cautionary signals.

So, while we do not suggest fighting the positive trends, chasing stocks that are extended from a technical perspective may prove regrettable. Looking for names with reasonable valuations and near high volume support levels may prove to be the better choice. 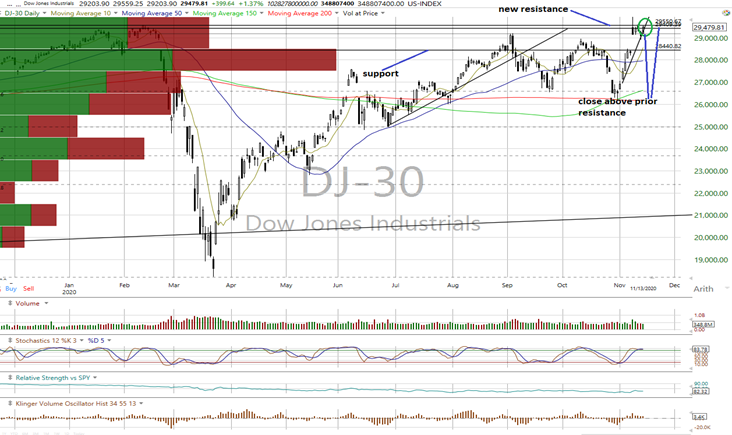 All the equity indices closed higher Friday with positive internals on the NYSE and Nasdaq with all closing at or near their intraday highs.

The charts saw several positive technical events registered with the DJIA closing above near-term resistance (see above) while the S&P MidCap 400, Russell 2000 and Value Line Arithmetic Index made new closing highs. All are in near-term uptrends and above their 50-day moving averages, which, in our opinion, should be respected.

Market breadth improved as well with the cumulative advance/decline lines turning positive from neutral and above their 50 DMAs.

are on bearish stochastic crossovers but have yet to be confirmed by violations of support or trend and, as such, are not yet actionable.

The data have increased their cautionary message with all the one-day McClellan Overbought/Oversold Oscillators moving to overbought levels on the All Exchange, NYSE, and Nasdaq (All Exchange: +57.77 NYSE: +63.72 Nasdaq: +52.63). While not particularly onerous, they are nonetheless overbought.

Also, the Open Insider Buy/Sell Ratio moved a bit further into bearish territory at 22.4 as insiders increased their selling activity as the rally progressed.

In contrast, the Rydex Ratio (contrarian indicator) remains bearish at 1.1 as the leveraged ETF traders remain leveraged long. The insider/Rydex dynamic is moving in a negative direction.

The valuation gap extended further with the S&P 500 trading at a P/E multiple of 22.7x consensus forward 12-month earnings estimates from Bloomberg of $158.13 per share, while the "rule of 20" finds fair value at 19.1x.

We are not inclined to fight the current positive trends and, as such, are maintaining our near-term "neutral/positive" outlook for the equity markets. However, the data suggest better buying opportunities may likely be forthcoming.

Get an email alert each time I write an article for Real Money. Click the "+Follow" next to my byline to this article.
TAGS: Indexes | Investing | Markets | Penny Stocks | Stocks | Technical Analysis | Trading

Short-Selling Is a Vital Part of the Stock Market

This seems awfully similar to the 2000 tech boom when everyone was a genius being long. What could possibly go wrong?

Jim Cramer: 10 Stocks That Millennials Should Own

A look at some names that Robinhood brokerage CEO Tenev tells us young people are buying.