On Thursday afternoon, Peloton Interactive (PTON) will report the firm's fiscal fourth-quarter results. Expectations are high. The Street is broadly looking for EPS of $0.11, which would be profitable. Consensus for revenue generation is for about $582 million. That would be good for year-over-year growth of 84%, if realized. Gross margin is expected to print above 44%.

It's no secret that Peloton has benefitted from the shut down and socially distanced environment created by the pandemic. I have not always been a fan of Peloton, believing that the products and services were priced out of reach for lower-to-middle-class Americans. The name was an early member of one of our original pandemic portfolios, but we took profits way, way too early for this name, which has truly soared.

I was at a doctor's office yesterday. I looked out the window as I waited. Across the street was a Planet Fitness (PLNT) location. The gym was open. The parking lot was not crowded. It was apparent that gym goers have not returned just yet in the kind of size that I am sure that kind of business would like to see. Or maybe the size of that crowd was limited. Regardless, there was no traffic in and out of that parking lot, so nobody was being physically turned away. Has Peloton had its run? Is the competition growing? Yes, and yes. Does that mean it's too late to get into, or back into, this stock? I am not sure. Let's think about this.

We know that gyms are reopening. We know that at least some folks will not come back. Will they exercise at home? The numbers for the past quarter are expected to be excellent. Fifteen sell-side analysts have increased their revenue estimates for PTON for the past three months. Zero analysts went the other way.

At home, there will also be increased competition. Lululemon Athletica (LULU) recently made a move to pay $500 million for something known as the "Mirror" -- offering high tech, live exercise classes for a price. Citron Research has already said that they like Nautilus (NLS) . There are plenty of cheaper ways to exercise at home, as well, if one is healthy and has the will. Affordability has long been a criticism against Peloton. This week, the firm addressed that.

This week, Peloton announced the launch of two new products. Historically, the firm has offered a stationary bike, a treadmill and a $39 per month subscription service that did not require the purchase of the equipment. The current stationary bike runs consumers $2,245. Peloton is dropping the price of that bike to $1,895, and introducing a higher-end Bike+ at $2,495. The current Peloton Tread is priced at $4,295. That product will stay where it is, and a lower-priced treadmill will be offered at $2,495.

The new Bike+ will be available in the US, UK, Canada and Germany almost immediately. The new treadmill is really a 2021 story. The shares closed the night before earnings at $91.17. I see a $94 handle in Thursday morning pre-opening trade. Wall Street likes what they are seeing. Just this week, we have seen a significant number of highly rated analysts increase target prices up above $100 -- and as high as $110, in more than one case.

I find it hard to criticize this name at this point, given how badly I misjudged the enthusiasm of consumers to pay what the firm charges. I was wrong about that. Now, the firm will clearly try to reach a broader base of consumers, still without being cheap. I mean right now, if one has to finance a base model stationary bike, that's probably $49 per month. Then tack on the $39 monthly subscription, and yes this is much more expensive than a lower-end gym, but still much less expensive than a high-end gym -- all from the safety of home. Talk to a Peloton user. I have never heard of one being unhappy. 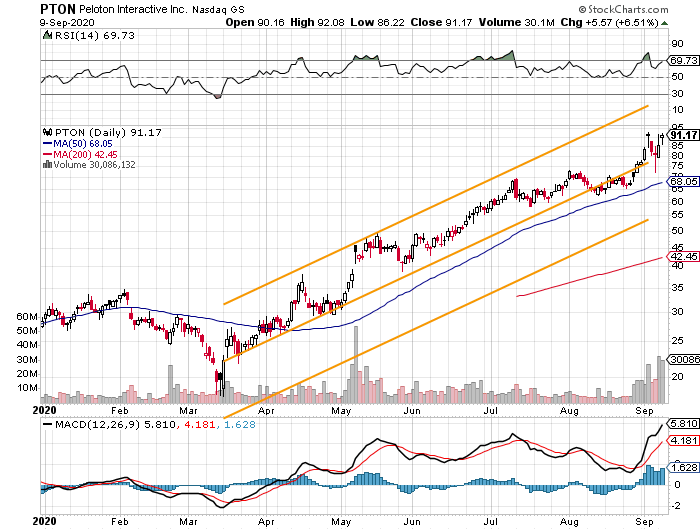 As readers can see, these shares remain on trend. For obvious reasons, there was no cup formation of any significance built last Spring, and the shares have not even kissed the 50-day SMA since April. Do I expect some profit taking on Friday morning? I would not rule it out. This is one of those names that could still grow nicely once the impetus for that growth finally ebbs into the background.

Get an email alert each time I write an article for Real Money. Click the "+Follow" next to my byline to this article.
TAGS: Investing | Stocks | Technical Analysis | Trading | Consumer Products | U.S. Equity