For his "Executive Decision" segment of Mad Money Tuesday night, Jim Cramer checked back in with John Rainey, CFO of PayPal Holdings Inc. (PYPL) , the online payments company with shares up 22% for the year.

Rainey started off by saluting our country's veterans. He said PayPal has an employee resource group called Serve, which has dedicated the entire month of November to the 181 veterans they've hired since 2017 and their families.

Rainey continued by saying that PayPal is all about making the movement of money easier, safer and more secure. The company does this through its partnership with Facebook (FB) as well as with its own services like Venmo, which adds a social component to money that the millennials love.

Rainey was also bullish on China, where his company was the first American financial institution to be granted a license to operate inside of China.

Let's check out the charts and indicators this morning along with the story.

In the daily bar chart of PYPL, below, we can see that prices made a small double bottom back in November/December before the rally to the July high. Prices corrected lower into October before a rebound and retest. PYPL is now poised to test the declining 50-day moving average line as well as the cresting 200-day line.

PYPL corrected about $25 from its highs but the daily On-Balance-Volume (OBV) line did not weaken much from August. It looks like the longer-term investors in PYPL stayed with those positions.

The weekly OBV line has shown weakness the past four months but it could be stabilizing now. The MACD oscillator on this longer time frame is narrowing toward a covert shorts buy signal.

In this Point and Figure chart of PYPL, below, we can see an upside price objective of $132 being indicated. 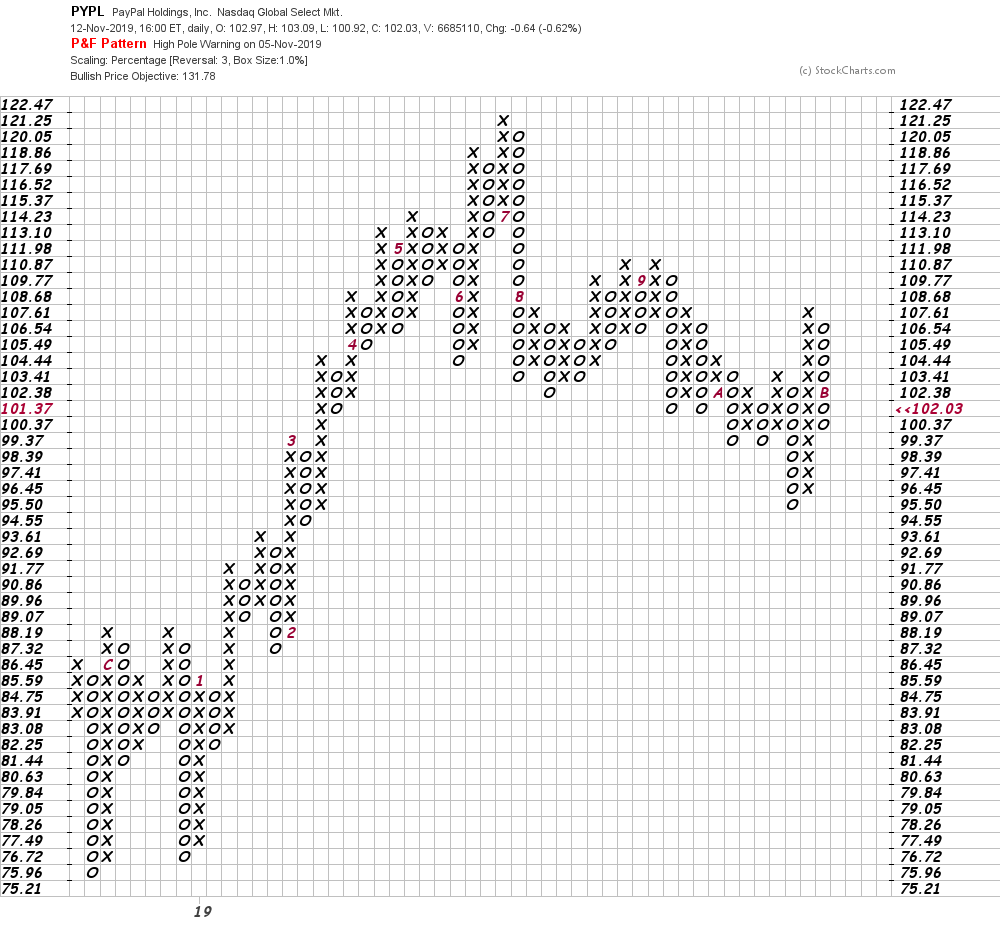 Bottom-line strategy: Nearby support around $100 could be tested further but traders could probe the long side of PYPL on available weakness risking below $95. The $130 area is our first price target.

Get an email alert each time I write an article for Real Money. Click the "+Follow" next to my byline to this article.
TAGS: Investing | Stocks | Technical Analysis | E-Commerce | Mad Money | Executive Interview