Mucci said Paychex is growing thanks to technology and innovation, making the company less economically sensitive than it has been in years past. Paychex is working hard to change its perception among investors and business owners alike with new products such as Pay-on-Demand, which allows employees to get paid as they earn and have those earnings deposited to different places, such as with PayPal (PYPL) .

Paychex is about more than payroll processing, Mucci said. Many companies need help to manage employee benefits as well and Paychex makes it easy to set up programs such as 401K plans with just a few clicks.

Let's check out the charts and indicators to see if the bulls can push PAYX to new highs in 2020.

The volume histogram shows a positive shift from early July and the daily On-Balance-Volume (OBV) line shows a slight positive trend from late June, signaling that buyers of PAYX have been more aggressive in a quiet way since the middle of the year. Rallies to around $88 have so far failed, but that may not last for long. The trend-following Moving Average Convergence Divergence (MACD) oscillator has been bullish -- above the zero line -- since October and suggests that prices will soon move to new highs.

In this weekly bar chart of PAYX, below, we can see that prices are above the rising 40-week moving average line. The weekly bars look like they have formed a bullish triangle formation and we are close to an upside breakout. The weekly OBV line has been very steady since April and suggests quiet, under-the-radar accumulation of new long positions. The MACD oscillator has corrected since June but is now turning to the upside and a fresh outright go long message.

In this Point and Figure chart of PAYX, below, we can see that the software is projecting a potential upside price target of $94 and that a trade at $88.19 will be a new high for the move up and should refresh the uptrend. I see $100 as a round number price target after $94. 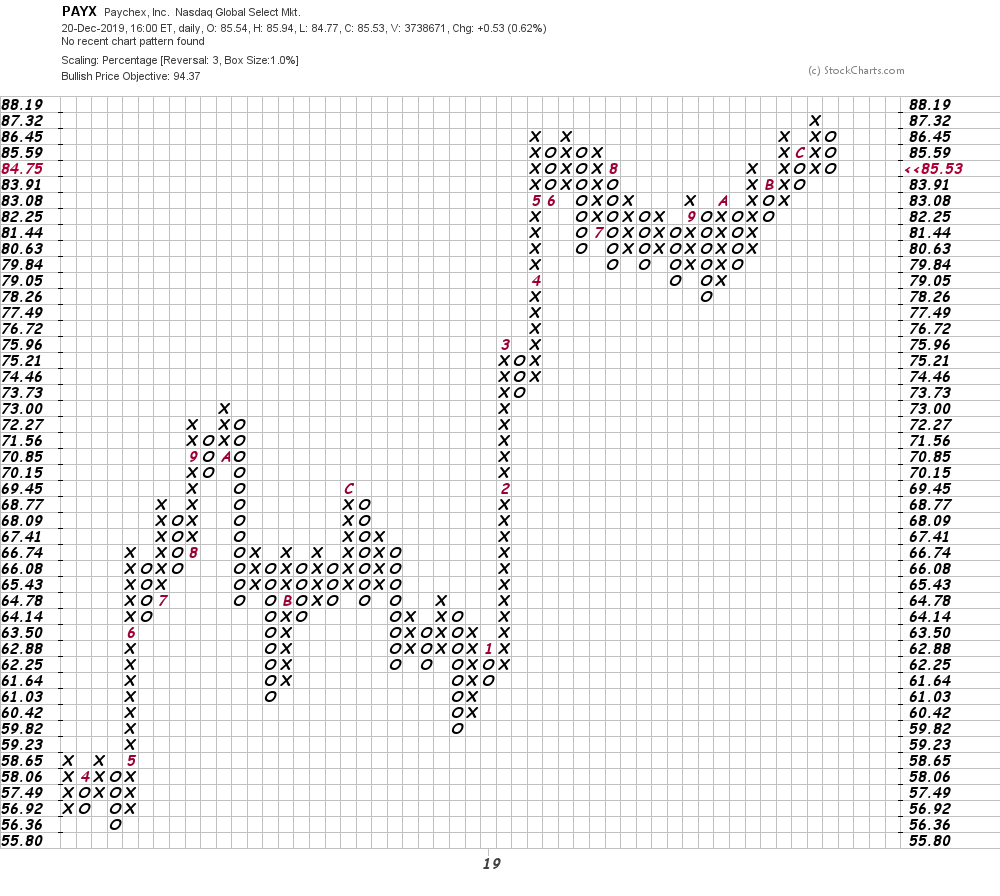 Bottom line strategy: I don't know what will be the catalyst for prices to break out on the upside, but it should happen fairly soon. Approach PAYX from the long side risking to $82 for now. Our price targets are $94 and $100.

Get an email alert each time I write an article for Real Money. Click the "+Follow" next to my byline to this article.
TAGS: Investing | Stocks | Technical Analysis | Financial Services | Software & Services | Technology | Mad Money | Executive Interview | Real Money

Let's look at the S&P 500 and Tesla as examples of why fundamentals are out the window.

Costco Is Winning in Retail and the Charts Show It

A look at COST amid its impressive June sales numbers.

Financial markets have been warped by policy, which has severed price discovery from underlying economic performance.performance. Know where the exit doors are along the way.