In his first Executive Decision segment of "Mad Money" Tuesday, host  Jim Cramer spoke with Marty Mucci, president and CEO of payroll processor Paychex Inc. (PAYX) , for a read on the economy and its recovery.

Mucci said about 80% of small businesses are nearing the end of their stimulus benefits, but many are also reinventing themselves to survive in a Covid-19 world. Paychex is seeing strong job growth in the South and in Florida, with both residential and commercial construction improving.

Mucci also noted that new business formation has increased by 20% over last year, which is an encouraging sign as many of these new businesses are outsourcing their payroll and human resources needs.

Let's check (no pun intended) on the charts and indicators.
In this daily bar chart of PAYX, below, we can see that prices indeed made a large outside day and lower close on Tuesday. This quick-turning, reversal-like bar chart pattern was in every commodity traders' tool bag in the 1970s. An outside day is when prices break above the high of the previous session and below the low of the previous session. A bullish move and a bearish move. A lower close tells traders that the bear gained the upper hand. I have no idea if anyone ever tested the pattern to come up with a probability, but commodity traders took it as gospel. Meanwhile, prices are above the rising 50-day moving average line and the still-declining 200-day moving average line. We can also see a recent golden cross as the 50-day line crossed above the 200-day line.
The On-Balance-Volume (OBV) line shows a decline from August into September, telling us that sellers of PAYX were more aggressive. The Moving Average Convergence Divergence (MACD) is above the zero line, but at a lower high than back in early June. Not a robust picture.

In this weekly bar chart of PAYX, below, we can see a mixed picture. Prices are trading above the bottoming 40-week moving average line. Prices have poked up into the bottom end of a potential resistance zone from $80 to $90. The weekly OBV line has been flat/neutral for the past four months while the MACD oscillator recently crossed above the zero line for an outright go long signal.

In this daily Point and Figure chart of PAYX, below, we can see a potential upside price target in the $93 area. 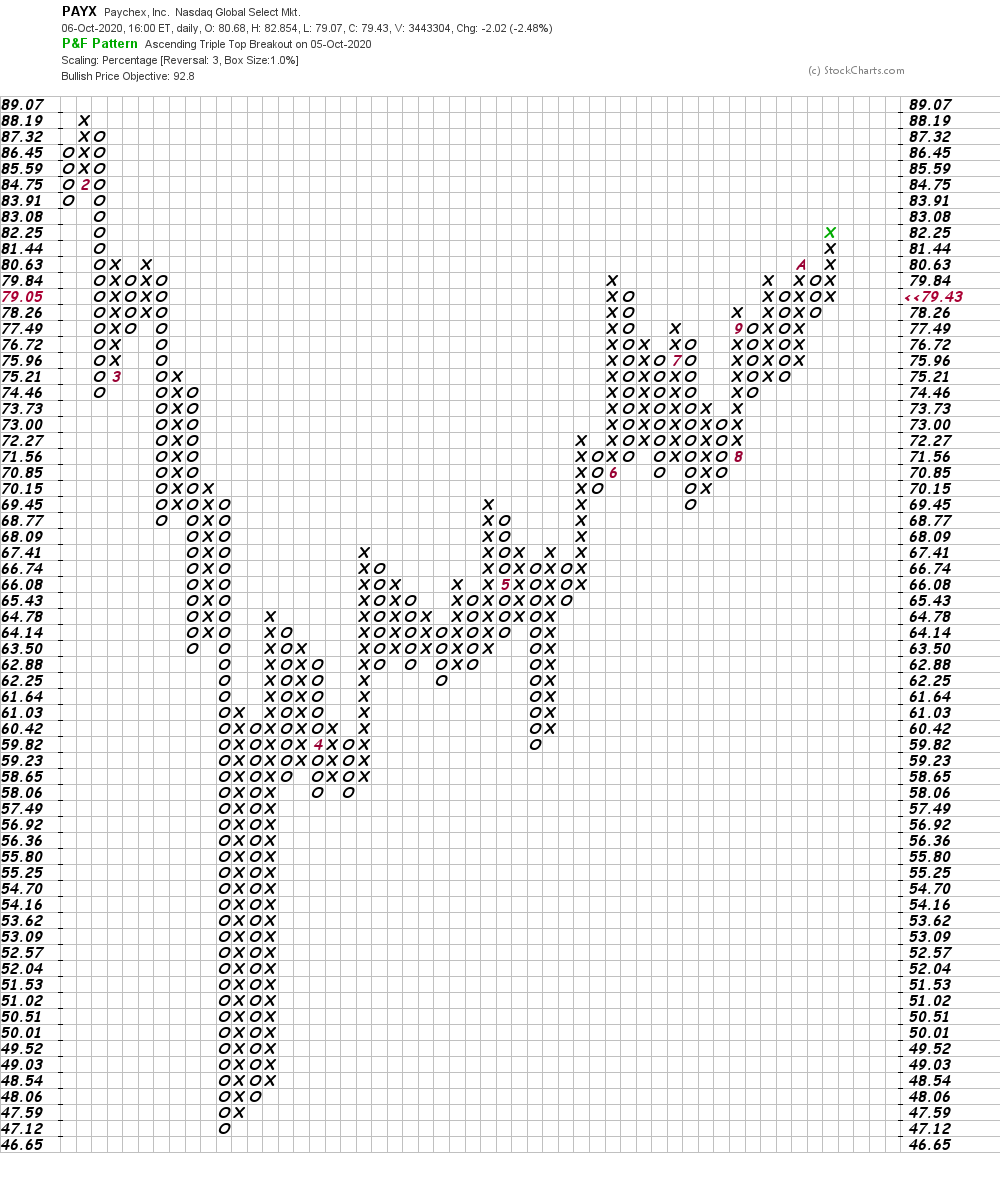 Bottom line strategy: We have presented three charts and a number of indicators. A case could be made for a turn lower and for continued gains. If you are willing to risk a close below $73 you could probe the long side of PAYX. I will sit this one out for now.
Get an email alert each time I write an article for Real Money. Click the "+Follow" next to my byline to this article.
TAGS: Investing | Stocks | Technical Analysis | Financial Services | E-Commerce | Mad Money | Executive Interview