In his "Executive Decision" segment of Mad Money Thursday night, Jim Cramer checked in with Marty Mucci, president and CEO of Paychex (PAYX) . Paychex is the nation's second largest payroll processor and their numbers could give us clues on the real strength of our economy. Mucci said the employment picture in the U.S. is still strong, with businesses continuing to grow and new businesses being formed from his perspective.

Turning to the topic of Paychex itself, Mucci said the company continues to evolve into a lot more than just payroll. His company's human resource outsourcing products are coming at a time when businesses need them the most. Let's check out the charts and indicators as I think traders could need them Friday morning.

In the daily bar chart of PAYX, below, we can see a mixed picture. PAYX corrected to the downside in October but rallied back nicely in November and this month it has not broken its late October low. I take that as a sign of strength for the stock. PAYX is below the declining 50-day moving average line and below the flat 200-day average line. The 50-day line just crossed below the 200-day line but a rally above $68 would put PAYX back above these averages.

The daily On-Balance-Volume (OBV) line has dipped with the price action but only modestly. Overall, since August, the OBV line has moved sideways suggesting only moderate selling and liquidation. The Moving Average Convergence Divergence (MACD) oscillator has crossed below the zero line like it did in October for another outright sell signal.

In this weekly bar chart of PAYX, below, we can see that prices have been trading above and below the flat 40-week moving average line. The weekly OBV line has declined from September suggesting selling.

The weekly MACD oscillator is crossing the zero line for an outright sell signal.

In this Point and Figure chart of PAYX, below, we can see a downside price target of around $58 being projected -- around the April low (look for the "4" on the chart). A rally to $69.45 is needed to improve this chart. 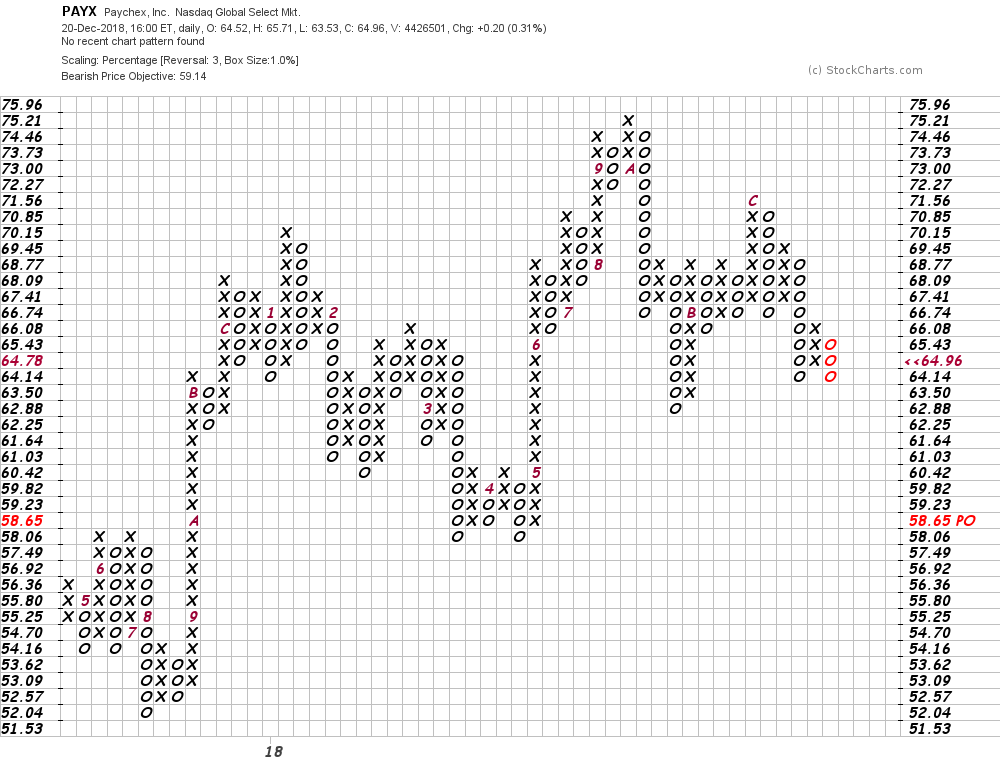 Bottom-line strategy: With mixed technical signals across our three charts I would take a cautious approach with trading PAYX.

Get an email alert each time I write an article for Real Money. Click the "+Follow" next to my byline to this article.
TAGS: Economic Data | Economy | Investing | Stocks | Technical Analysis | Financial Services | Mad Money