On Mad Money's "Executive Decision" segment Monday night, Jim Cramer talked with Marty Mucci, president and CEO of Paychex, Inc. (PAYX) . The stock has been bouncing back after last week's punishing post-earnings price action. More about that below.

Mucci said the company delivered on what most expectations were calling for, and felt good about PAYX moving forward. The need for HR support has "never been greater," Mucci said, thanks to all of the new regulations and complexities small- and mid-sized businesses now face.

However, hiring from small businesses will likely slow a bit, he reasoned. Higher interests were a tailwind for PAYX, but Mucci said investors shouldn't look at that as the company's main catalyst. The fundamentals of the business are driving PAYX, not interest rates.

Let's look at the charts and indicators to pair with the fundamental story.

In the daily bar chart of PAYX, below, we can see a very strong, almost non-stop rally from late December to June. Recently PAYX pulled back and broke the cresting 50-day moving average line. The 200-day average line is well below the market and has a bullish slope.

The daily On-Balance-Volume (OBV) line shows a matching rise from December and some weakness in June as sellers of PAYX may have started to nail down some profits. The Moving Average Convergence Divergence (MACD) turned lower way back in February and broke below the zero line recently for a sell signal.

We see a mixed picture for PAYX in the weekly chart, below. Prices have been trending higher the past three years with three previous corrections. PAYX is above the rising 40-week moving average line so math tells us that we are in an uptrend.

The weekly OBV line has moved up and down with the long-term price action. Sellers of PAYX have been more aggressive the past two months. The MACD oscillator shows a downside crossover from above the zero line -- this is a take profits sell signal.

In this Point and Figure chart of PAYX, below, we look at just the pure price action and reversals -- no volume, no gaps, no daily bars. This chart suggests that prices could decline further to the $74 area. 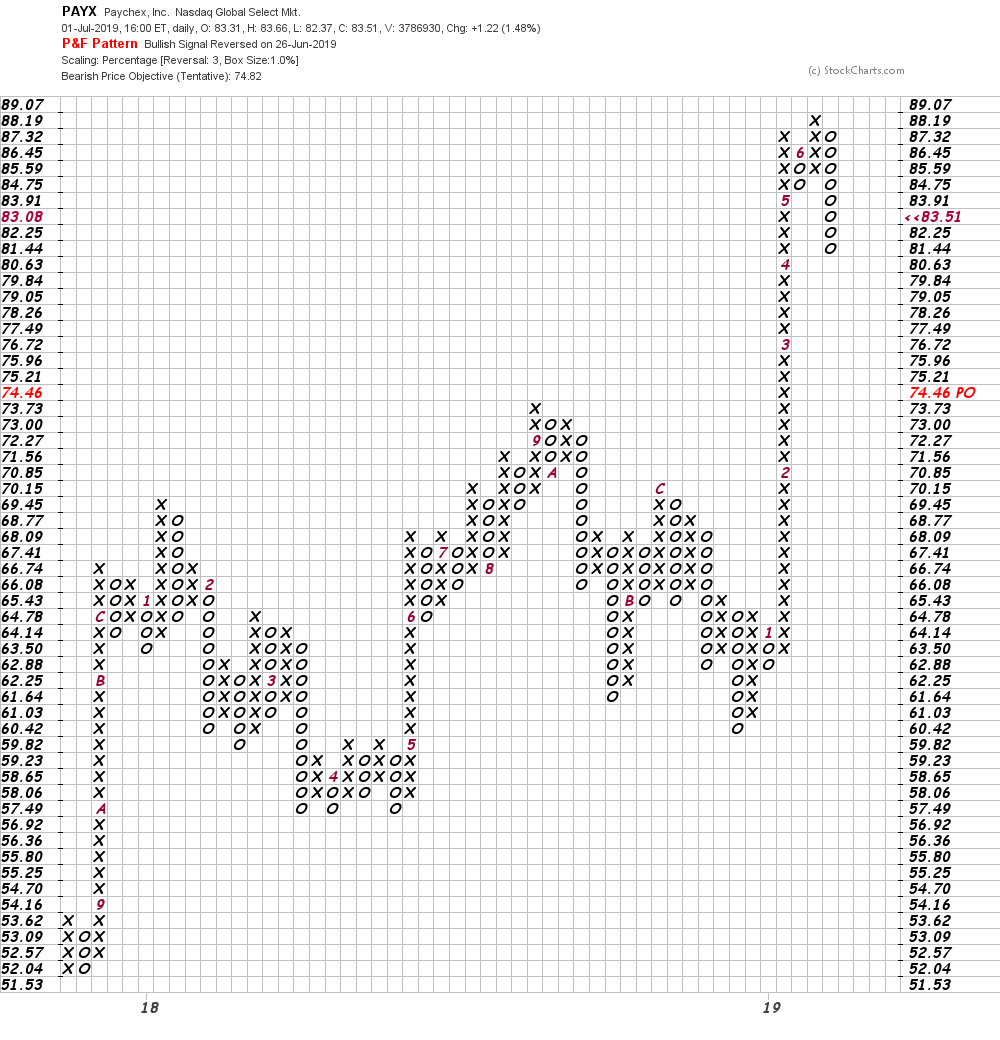 Bottom-line strategy: There are enough signs of weakness to be cautious on PAYX in the short-run. We have seen a number of corrections in the past three years and a decline toward $74 would just be another one.

Get an email alert each time I write an article for Real Money. Click the "+Follow" next to my byline to this article.
TAGS: Fundamental Analysis | Investing | Stocks | Technical Analysis | Mad Money | Executive Interview