On the Executive Decision segment of his "Mad Money" program Wednesday, Jim Cramer spoke with Marty Mucci, president and CEO of Paychex Inc. (PAYX) . Paychex just beat on earnings and revenue expectations and raised its guidance. It also has a solid dividend yield of roughly 3%, Cramer noted.

It was a "solid first quarter," Mucci said, with revenue growing 15% year over year and operating income rising 9%. While many investors are worried about the economy, Mucci was upbeat. Job growth is picking up, and while it's down slightly year over year Mucci said that's due the tight U.S. labor market.

Further, wages are up and so are working hours. That's good for the consumer. As for the trade war, Paychex's surveys suggest roughly 75% of respondents -- mostly from small and midsize business with less than 50 employees -- don't expect to be impacted.

Finally, Paychex continues to leverage technology to improve various services with its clients and with its clients' employees. That's helping to fuel Paychex's growth, Mucci said. Let's check and see if the charts will fuel the stock price.

In this daily bar chart of PAYX, below, we can see that prices touched/tested the rising 200-day moving average line in early September and now PAYX is above the bottoming 50-day moving average line. The volume pattern is hard to read but the On-Balance-Volume (OBV) line has been flat or steady the past three months as prices declined. This suggests that holders of PAYX did not become aggressive sellers when prices declined $8 from the high in June. The Moving Average Convergence Divergence (MACD) oscillator turned up in late August for a cover shorts buy signal and is now trying to cross the zero line from below for a buy signal.

In this weekly bar chart of PAYX, below, we can see that prices are above the rising 40-week moving average line. The OBV line has been steady the past five months. The MACD oscillator is narrowing above the zero line toward an eventual new buy signal.

In this Point and Figure chart of PAYX, below, the software is projecting a downside price target of $74. A trade up at $84.75 will probably turn this chart more constructive. 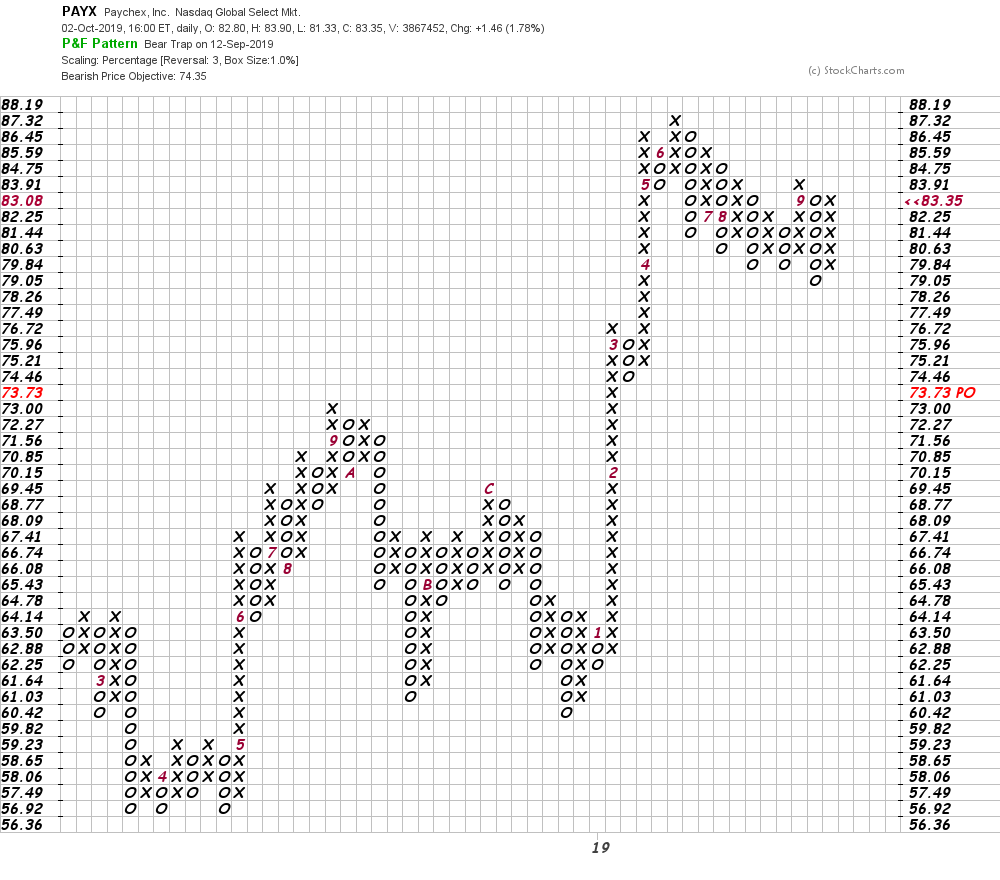 Bottom line strategy: Even though the Point and Figure chart is currently bearish, traders could probe the long side of PAYX around $82 risking a close below $78. Our price target is $100.

Get an email alert each time I write an article for Real Money. Click the "+Follow" next to my byline to this article.
TAGS: Investing | Stocks | Technical Analysis | Commercial & Professional Services | Fintech | Software & Services | Mad Money | Executive Interview | Real Money