I have spent a great deal of time lately discussing sentiment, because that has basically been what has moved the market. In early June, sentiment was giddy over the "reopening trade," and stocks peaked. The S&P 500 promptly fell 7% and many stocks fell much more than that.

By Friday of last week, folks were finally starting to get concerned as we saw the put/call ratio rise to triple digits for the first time since that big whack on June 11. Then there was that poll I did on Twitter over the weekend where 60% were looking for the next 100 points to the downside on the S&P, so naturally we have since rallied just about 100 points.

But now sentiment has slowly begun to shift again. Now the complacency has crept back in. Now folks think the "re-closing" is priced in (it might be; we usually don't react to the same news as dramatically the second or third or fourth time around). But, you see, the put/call ratio has not fallen dramatically, but it has fallen back to neutral.

It is the Daily Sentiment Index (DSI), however, that has captured my attention this week. Nasdaq's has zipped right up to 93. As a refresher, readings over 90 have tended to be poor buying opportunities. Each time Nasdaq's DSI has been over 90 in the last eight months we have seen a decent pullback -- even if it's just a one-day whack in the ensuing week. The last time was early June. We tagged 89 about 10 days ago, before last week's decline.

The DSI for the S&P has a bit more room to run as it is at 85. What I find interesting is that the DSI for the Volatility Index is at 18. So, another day or two of rallying for the S&P would take the S&P over 90 for the first time since January and maybe even the VIX down to single digits.

On Thursday, we will see the American Association of Individual Investors' weekly tally in their survey which has not showed much bullishness since January. Yet curiously AAII does a survey on how their members allocate their assets. This is a monthly read. This month they have moved their stock allocations up to 63.2%, which is the highest since February (when they were at 66%). The long-term average is 61%. They have also taken their cash to 18.4%, the lowest since February when it was 14%. The historical average is 23% AAII says.

Keep this in mind when you see that the AAII survey shows a low number of bulls and a high number of bears. It seems they are voting one way and investing another way. 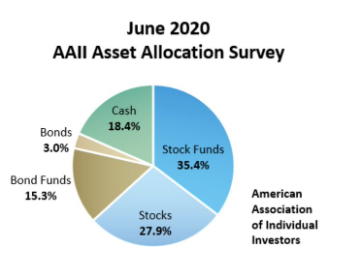 Finally, you probably don't need me to tell you that breadth was flat for Wednesday's rally, which means there has been no change in the indicators. The McClellan Summation Index is still heading down, the 10-day moving average of stocks making new lows is still rising and the number of stocks making new highs is contracting.

The action I found most interesting, though, was the banks. Interest rates were up, but the banks traded down. That's new. For now, they can't rally and they don't break down.

Meisler will not be writing for Friday morning but will resume her column on Monday.