Why aren't shares of Parker-Hannifin Corp. (PH) going down, even though the company has received six analyst downgrades in a row? During Wednesday night's Mad Money program Jim Cramer said it's because investors are following the Federal Reserve.

Cramer has often reminded viewers of Mad Money that they cannot fight the Fed and they cannot fight the market, both of which are helping to boost Parker-Hannifin, which manufactures industrial equipment and gets nearly half of its sales from overseas. "The market simply doesn't care," about downgrades when interest rates are on their way down, Cramer concluded.

Let's take a couple of quiet moments this morning to review the charts and indicators of PH. Maybe the tide will turn.

In the daily bar chart of PH, below, we can see some bearish clues. Prices are barely above the bearish 50-day and 200-day moving averages. The big picture of PH may be sideways but it has been weak since April.

The daily On-Balance-Volume (OBV) line has been neutral/flattish since November and shows lower highs from April. The Moving Average Convergence Divergence (MACD) oscillator shows a bearish crossover in April followed by a move below the zero line for an outright sell signal.

In the weekly bar chart of PH, below, going back three years we can see a zenith in late 2017. Prices trended lower till December 2018 and sideways since then. The longer 40-week moving average line has a negative slope.

The weekly OBV line shows weakness from April and the MACD oscillator is right on top of the zero line.

In this Point and Figure chart of PH, below, we can see a potential downside price target of $148 or so which would be close to a new low for the year. 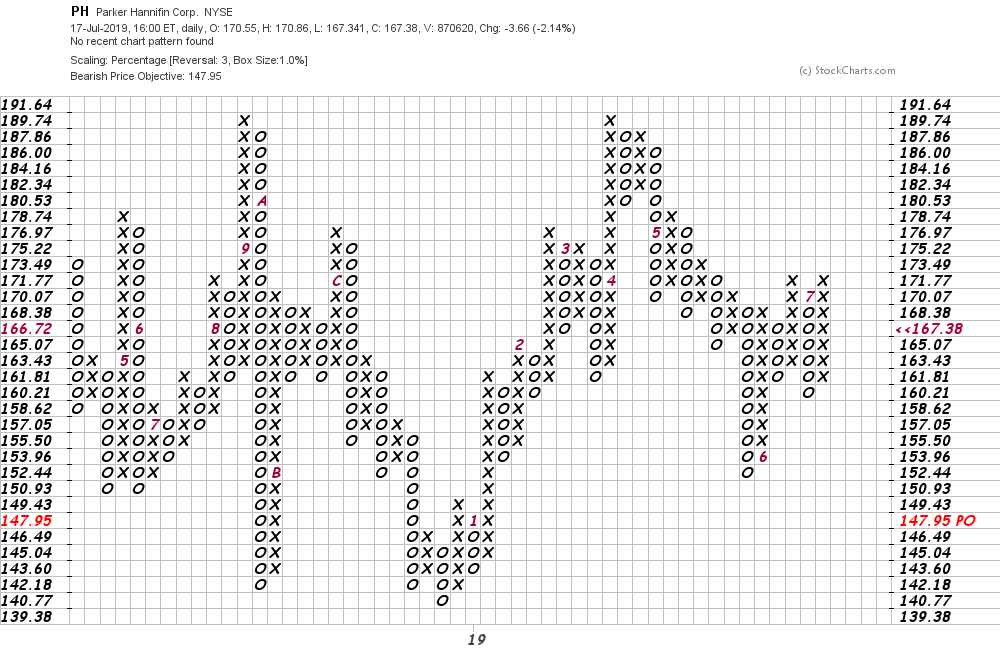 Bottom-line strategy: While PH may be ignoring downgrades by fundamental analysts it looks like the charts are bearish and we should see weakness ahead.

Get an email alert each time I write an article for Real Money. Click the "+Follow" next to my byline to this article.
TAGS: Investing | Stocks | Technical Analysis | Industrials | Mad Money