I heard the multitude of machinery that takes up space in my home whir back to life sometime around zero-two. There are several trees down on every block in my neighborhood, including mine, and I really did not expect electrical crews to make their way around the area for a couple days. I would have to say that this is indeed a nice surprise. Equities had been under pressure when I lost power, so the rally experienced by U.S. markets over the final 90 minutes or so was equally nice to see. I did notice how gold blasted through the $2,000 level. Rock on. Literally.

Another day, another all-time record for the Nasdaq Composite, though that index actually under-performed both blue chips and small-caps while performing in line with the S&P 500. Energy, Materials and Staples led the way as nine of 11 sectors shaded green for the day.

Interestingly, it was the information technology sector that appeared to struggle on Tuesday, just barely managing to close higher due to some profit taking across the software/cloud names. Even more interesting, it may have been that isolated from the rest of the sector. Meanwhile, semiconductors stayed hot. The Philadelphia Semiconductor Index scored an increase of 1.5% on the day, led once again by the seemingly unstoppable Advanced Micro Devices (AMD) . 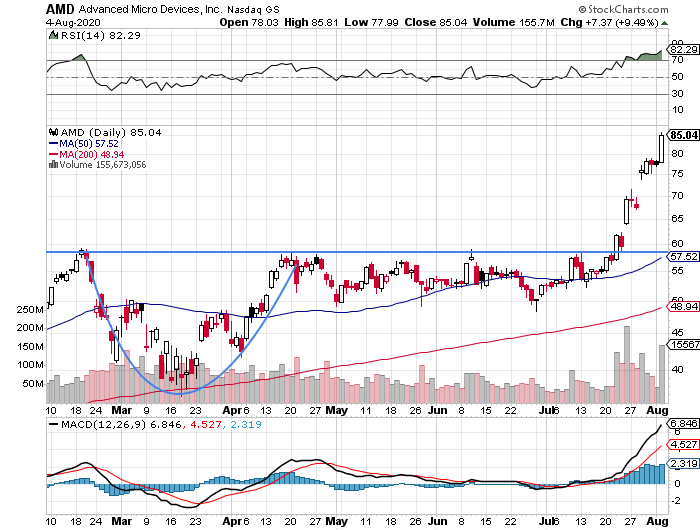 These shares are more than extended from the $71 price target created by the June breakout after long struggling with the $58 pivot. Tuesday's run came on some positivity created across the community of analysts as it suddenly dawned on a few of those types that AMD is taking Intel's (INTC) lunch. I have sold some just to protect myself. I am not selling another share. Price target? None yet.

Everyone knows I am a huge fan of AMD CEO Lisa Su. Now, I am not going to just hold on to the balance and watch this name. I am going to enjoy this. Can the shares come back and fill the gap created in late July? Technically, they should, but we're playing mostly with house money at this point with AMD, which is a holding of Jim Cramer's Action Alerts PLUS charitable trust. Why not relax and enjoy the show when a name that you have invested in and stood behind for a good while goes quite suddenly and unexpectedly parabolic?

I think we all know. The number of daily new infections nationwide had tailed off slightly to still appallingly elevated levels coming out of the weekend. Then, Tuesday the number went higher again. Some states at least seem to be plateauing, we hope, which even if not wonderful would be better than not plateauing. The virus, as it has been since March (some might say February), is still in charge. It changes the way society works, the way society plays, and most importantly, the ability for any kind of economy to function at anything close to potential.

Beyond the spread of the virus itself, the story is one (actually, much more than one) of policy. A story of extending credit, forgiving debt, increasing money supply, and throwing, or dropping, money wherever thought best by those at the central bank or elected to the nation's legislative bodies as monetary and fiscal authorities work so closely together as to blur the lines of independence, not to mention impact in a negative (but perhaps necessary) way the efficiencies of free market pricing that had made the U.S. economy as large and productive as it had become.

Quoted in The Wall Street Journal late Tuesday, Treasury Secretary Steven Mnuchin stated, "We're going to try to reach an overall agreement, if we can get one, by the end of this week, so that legislation could be then passed next week." On the other side of the coin, Sen. Chuck Schumer of New York made mention that his opposition had made some concessions and that he appreciated this, but that the two sides were still far apart on a number of issues.

Bear in mind, this is not Democrats versus Republicans, even though it does seem like that. This is Democrats who are trying to take at least the executive branch of government in November with an eye on more than that versus the administration, which is trying to hang on to that very same executive post. Consequently, those two sides are both very likely to agree that, in response to this crisis, bigger is better. Then the two sides likely will be opposed by fiscal conservatives who tend to be, but not always are, Republicans. This is why Wall Street has so much confidence that some compromise that probably leans toward the left in nature is agreed upon. It is in everyone's short-term interest. Long-term interest? Not today's problem.

Focus must be on the idled portion of the labor force as well as the moratorium on rental evictions. It now appears that, as weak as it sounds, there is an agreement to reach an agreement. Take that for what it is worth. On Tuesday, it was worth at least something. That is what drove keyword-reading algorithms that impact price discovery across financial markets to do what they did. The headline, deserved or not, will be reserved for the $600 federal stipend to weekly state-level jobless benefits. This stipend is what has sustained consumer activity throughout the pandemic, and this stipend ran dry last week.

I understand the need to take impairment charges. I get the idea of writedowns.That said, should publicly traded companies even report both adjusted and GAAP earnings per share?

Take the Walt Disney Company (DIS) on Tuesday afternoon, for example. Disney reported adjusted earnings per share of $0.08 (profitable), beating the consensus by more than 60 cents. Oh, GAAP earnings per share landed at -$2.61. That number missed expectations by a mile. No, make that two miles. Hmm, looks more like three.

I am not knocking Disney. This is playing the game by the rules the game is played by. The theme parks took a $3.5 billion hit to the teeth in operating income. The studios experienced a 55% year-over-year decrease in revenue. Cable revenues declined 10% as advertising budgets across the entire global economy have been ratcheted in. There is some positive news, but that news is conservative. Guidance? Nah.

The streaming services are still growing. Losing money, but still growing. Disney+ now has more than 60 million subscribers, Hulu now has more than 35 million and ESPN+ 8.5 million. The trick moving forward, short of medical miracles, will be in accelerating the path toward profitability for this, the one part of Disney's entire global enterprise that actually benefits from a "stay at home" economy and is functioning normally.

Disney has been smart about bringing down expenditures. Yes, that has meant furloughed employees and reduced salaries for senior managers. This has also meant the suspension of the dividend at Disney, which like AMD is a holding of Jim Cramer's Action Alerts PLUS charitable trust.

The deal is this. Parts of Disney will succeed. The share price has hung in there because people do believe in the magic. That also makes this stock very expensive in this environment. The Walt Disney Company, in my opinion, cannot succeed until people in general are not afraid to share mass entertainment and pay up for it. That means Disney by extension needs a less fearful economic backdrop. To get the economy to that point, one must first travel the halls of both science and geopolitics.

This means, in short, successful vaccines and therapeutics, reduced barriers to global tourism, and much lower levels of unemployment. An extra $600 a week might sustain temporarily a family's standard of living, but they are not going on vacation with it. They may not even go to the movies with it. That money is spoken for, by rent and groceries.

I just see too much risk in theme parks, the cinema, cruise lines and hotels until I know more about the safety and efficacy of what companies such as Moderna (MRNA) , Pfizer (PFE) and AstraZenaca (AZN) are working on for the short to medium term, what Regeneron (REGN) is working on for those already ill, and then what companies such as Merck (MRK) and Johnson & Johnson (JNJ) come up with for the longer term. (Moderna and Regeneron report here on Wednesday morning.)

Will I be long DIS ever again? I hope so. I also think so.