Monday was special, in a way. Equities opened higher, and then surged into mid-morning. Profit-takers took their shot throughout the early part of the afternoon, only to be overcome yet again by "dip buyers," who took the broader U.S. large-cap indices back toward the highs of the day as the closing bell sounded.

How impressive was this rally?

I would like to see it as perhaps more impressive than it was. That said, there is no doubt that this current rally has zigged a few times when I thought it might zag. Understand that I take nothing for granted just because I have been around the block a few times. I may be less easily surprised, but markets are clearly different now. I did not grow up, nor was I trained for this environment. Nobody else you hear today was either.

U.S. equity markets simply took their cue from abroad coming off of a three-day weekend. Chinese stocks soared up to elevations not seen in a number of years. Europe then followed suit.

Where it all came from appeared to be a front page story in the China Securities Journal (which is state-owned) stating how important it was to foster a "healthy bull market." If that means that the Chinese government will do whatever it has to in order to grow the economy coming back from this pandemic, then traders around the world, in my opinion, read the teal leaves correctly. What that would do would put what had been, maybe, the engine of the global economy, or at least the driver of regional growth across Asia and the Pacific, back on track. Rising debt as an issue? Hard to find a mention anywhere these days. Anywhere.

Here in the U.S., trading volumes increased from Thursday's pre-holiday levels, returning to 50-day (volume) simple moving averages (SMAs) in aggregate for both constituent members of the S&P 500 and the Nasdaq Composite. Winners beat losers by roughly two to one at the New York Stock Exchange, as well as at the Nasdaq Market Site.

The Consumer Discretionary sector led the way higher Monday. This is somewhat deceiving as the autos were indeed the top-performing industry within the sector. I mean the autos did broadly have a good day, but it is a fact that Tesla (TSLA) ran more than 13% after highly respected analyst Joseph Osha at JMP Securities upped his target price for the name to $1,500.

It was not just discretionary types that did well, though. After the Shanghai Composite ran 5.7%, that performance was also topped by Amazon's (AMZN) 5.8% rise after those shares pierced the $3,000 level. Even better than that (in a small ball sort of way) was Uber Technologies'  (UBER) 6% surge after confirming a $2.6 billion (all stock) acquisition of Postmates. For those keeping their eye on the ball, the Nasdaq 100 outperformed the Nasdaq Composite more on strength in hardware and semiconductors than on software or biotechs.

Just one question. Anyone else notice collapsing Put/Call ratios that conflict with an actual increase in the VIX (CBOE Volatility Index) on Monday? Yeah, same here. Conflicted messaging? I would think that there could be at least one major technical attempt to take profits up here, possibly on Tuesday.

Equity index futures markets are signalling some weakness. While there is some hope brewing around the rapid development of a vaccine meant to head off Covid-19, or even better a therapeutic for those already infected, the data released by several U.S. states is indeed quite daunting. As some areas seek shelter in increased mitigation, one has to wonder just what has already taken leave of Pandora's Box that was left wide open for far too long.

Simply the scariest box I know of. It was not just a positive headline that ran in a government-run newspaper in China that drove buyers on Monday. The ability of investors to sustain that rally, once markets had started to sag, had a little something to do with the ISM Non-Manufacturing survey for June.

Not only did the headline print (the actual PMI) show far greater expansion than anyone had expected, there was indeed robust activity in New Orders, which count most of all, even if service sector employment continued to ebb. Let's not forget that this is the engine that drives the U.S. economy when it functions normally.

The caveat is that most services require some measure of human interaction. As case numbers continue to rise in a majority of U.S. states, and certain governors feel compelled to take action to reduce this interaction, this is where the leveling off of the to-this-point "V-shaped" recovery will be most visible in one month's time.

Optimism, Just Not Yet

I don't even know if I have the right to draw a correlation here. That said, readers already know that we have been all over the treatment and/or prevention of Covid-19 in this space. I thought it very interesting on Monday when I saw that Apple (AAPL) had upsized its manufacturing plans over the next few quarters in regards to building inventory for its iPhone products.

Apparently, Apple has increased its plans to manufacture smartphones by between 1 million and 2 million units for both calendar Q3 and Q4. Then for Q1 2021, a whopping increase of between 5 million to 10 million units is now planned.

Does this mean that Apple is preparing for what the company expects to be broadly increased consumer demand, and just trying to avoid getting caught flat-footed? I don't see a way to see this as a negative, unless medicines targeting Covid-19 largely fail in unison. Is that what Apple sees?

While we are on the topic of therapeutics, there is no way to discuss the topic without discussing Regeneron Pharmaceuticals  (REGN) .

REGN shares traded higher on Monday (though they closed closer to the low than the top) as news broke that a double antibody cocktail that the company is working on with French drugmaker Sanofi (SNY) would enter Phase 3 clinical trials at roughly 100 sites across the U.S. involving 2,000 patients. The trials are being run jointly with the NIAID (National Institute of Allergy and Infectious Diseases).

I am already long REGN and the stock has done well. 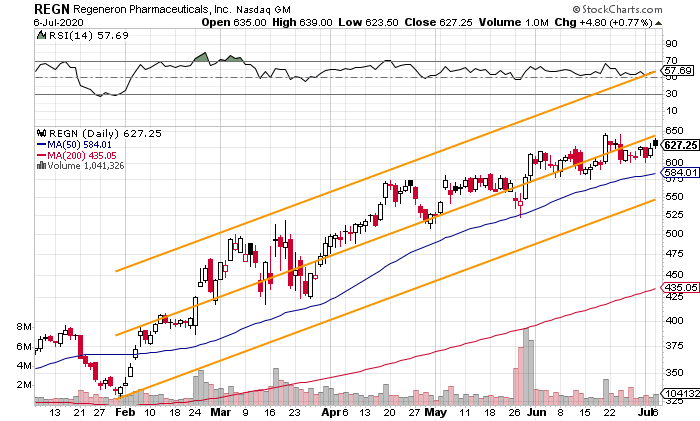 This progress has been rather methodical ever since the pandemic reared it ugly head earlier this year. What I noticed on Monday was the setup for SNY. 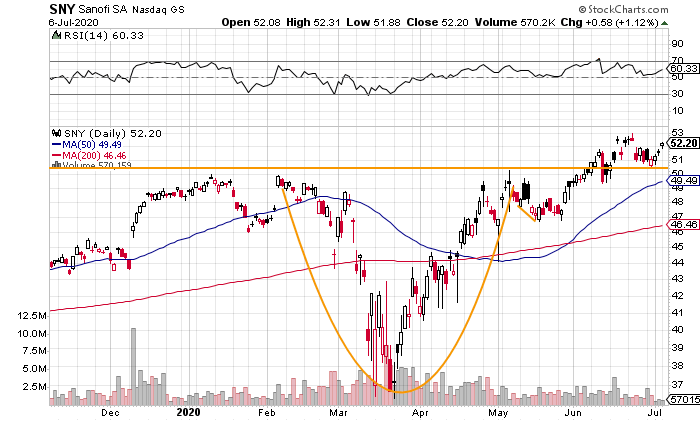 SNY shares had already formed their cup-with-handle pattern. There was then a breakout that fizzled, but support, as you see, has been realized at least for now at pivot.

The fact is that technically, should SNY shares continue to hold that spot, there is no reason to believe that they cannot reach beyond the $61 level. A positive headline down the road regarding the potential for this cocktail could make this happen.

Just an idea here. Sanofi reports at the end of July. I doubt we hear any news regarding this trial by then. If an investor were to use Tuesday weakness to grab a few of these shares, while writing December $55 calls (representing a like amount) for more than $2 (otherwise not attractive), then this trade may work in a risk-averse kind of way for the cautious.

(Apple and Amazon are holdings in Jim Cramer's Action Alerts PLUS member club. Want to be alerted before Jim Cramer buys or sells these stocks? Learn more now.)

Get an email alert each time I write an article for Real Money. Click the "+Follow" next to my byline to this article.
TAGS: Investing | Markets | Stocks | Trading | Biotechnology | U.S. Equity | Coronavirus