For his second Executive Decision segment of "Mad Money" Tuesday, Jim Cramer checked in with Marty Mucci, president and CEO of Paychex Inc. (PAYX) , the payroll processor with its finger on the pulse of our small business economy.

Mucci said Paychex ended the year strong with revenue growth of 7% and operating margins of more than 35%. The company has $1 billion in cash on its books and remains committed to its dividend, which currently yields 3.5%.

Mucci said Paychex hasn't seen much fallout from the recent surge in Covid-19 cases. He said the tide turned positive in May and things have been "looking up" since then, with more checks processed with every pay cycle.

Cramer said he stands by Paychex despite an analyst downgrade on Tuesday. Let's check out the charts and indicators.

In this daily bar chart of PAYX, below, we can see that prices were cut in half from February to the middle of March -- a familiar story. PAYX rebounded in early June but has weakened with a lower high in July. Prices failed at the underside of the declining 200-day moving average line and just closed below the rising 50-day moving average line.

The On-Balance-Volume (OBV) line only shows strength from May into June followed by a sideways to lower pattern. The movement of the OBV line tells us that buyers of PAYX are not that aggressive. The Moving Average Convergence Divergence (MACD) oscillator peaked in June and subsequently has weakened back to the zero line, telling us that this chart is lacking in trend strength

In this weekly bar chart of PAYX, below, we can see a longer-term view of PAYX. Prices have been failing at the underside of the declining 40-week moving average line. The weekly OBV line shows some rolling overin recent weeks and the MACD oscillator has been narrowing below the zero line -- not a robust picture.

In this daily Point and Figure chart of PAYX, below, we can see a possible downside price target in the $62 area. 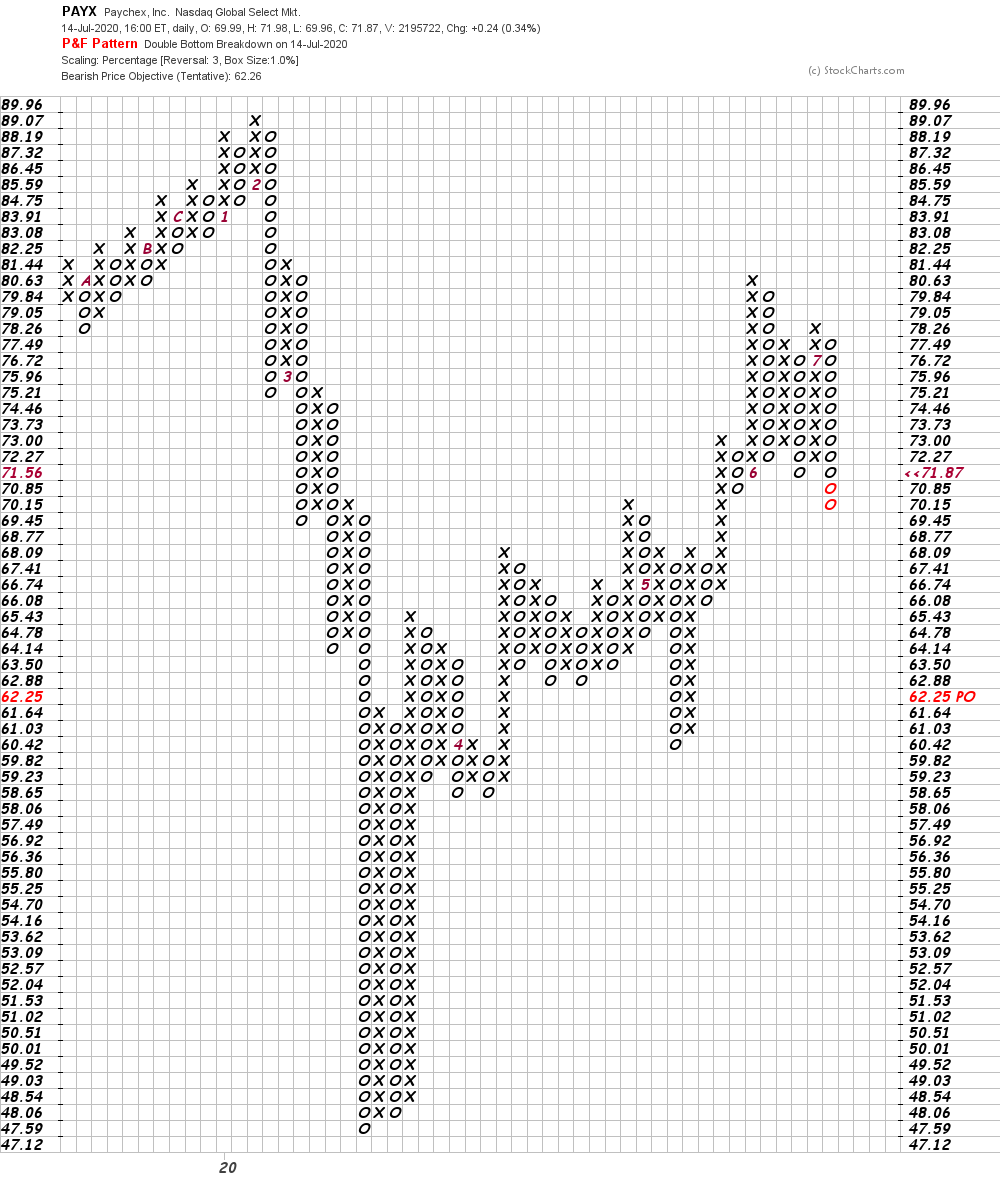 Bottom line strategy: Balancing the three charts above, I would avoid the long side of PAYX for the near term. PAYX may find good support around $70 and not weaken toward the Point and Figure target of $62. Let's check in again on PAYX in a few weeks.

Get an email alert each time I write an article for Real Money. Click the "+Follow" next to my byline to this article.
TAGS: Investing | Stocks | Technical Analysis | Financial Services | Mad Money | Executive Interview | Real Money | Analyst Actions