Pesicka offered some perspective on the Covid-19 crisis saying a typical hospital uses around 10,000 to 20,000 surgical masks/week. During this crisis, hospitals are now using between 200,000 and 300,000 masks/week.

Owens & Minor began ramping their production in January and Pesicka said they are now operating every one of their factories 24/7 making masks, gloves and gowns as fast as possible.

Let's see how the OMI charts are operating.

In the daily bar chart of OMI, below, we can see a bearish picture. Rallies to the $7 area have all failed the past seven months. The number of rally failures outweighs the number of lows.

The trading volume increased in early March when prices broke to a new low telling me that investors were voting with their feet. The On-Balance-Volume (OBV) line peaked in early December and has worked lower indicating that sellers of OMI have been more aggressive for a number of months now.

The Moving Average Convergence Divergence (MACD) is bearish and has been hugging the zero line since November. Despite its products being in high demand this chart of OMI is not attractive from the long side.

In the weekly bar chart of OMI, below, we can that OMI has suffered a huge decline over the past three years. The 40-week moving average line has bottomed out after OMI became a "penny stock."

The volume pattern does not show accumulation and the OBV line shows only a slight improvement from last April. The MACD oscillator is not showing us much in the way of trend strength. Like the daily chart, the weekly chart is not particularly attractive to buyers.

In this daily Point and Figure chart of OMI, below, we can see the longer-term downtrend and a potential downside price target of $3. A retest of the 2019 lows looks possible. 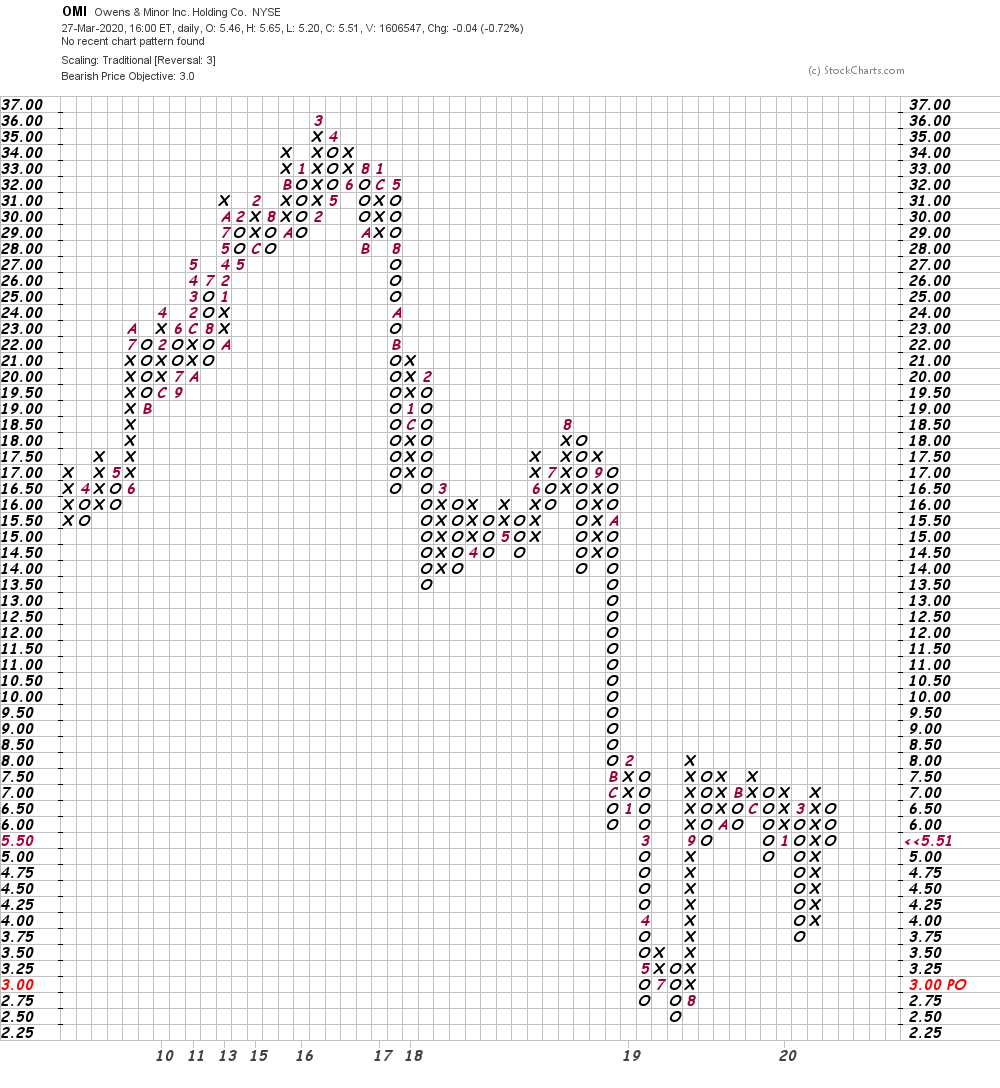 Bottom-line strategy: While the company OMI seems to be doing the right thing during this pandemic the stock does not look constructive. Avoid.

Get an email alert each time I write an article for Real Money. Click the "+Follow" next to my byline to this article.
TAGS: Investing | Stocks | Technical Analysis | Health Care Equipment & Services | Healthcare | Mad Money | Executive Interview | Coronavirus