Overbought and oversold are momentum indicators. They try and tell us when we are running out of steam, either when we are heading down or heading up.

What makes an oversold reading positive for the market is when it is accompanied by too much negativity and positive divergences. Oh, and the indicators are turning up.

What makes an overbought reading negative for the market is when it is accompanied by too much complacency and negative divergences. Oh, and indicators are rolling over.

What we have now is a market that has reached an overbought reading. It ran out of some steam on Monday, as I'm sure you saw. The giddiness we saw on Friday eased off just a bit as the Daily Sentiment Index (DSI) backed off from 90 for the S&P 500 (to 87) and from 93 for Nasdaq (to 89).

There was not much change in the indicators, except to point out that the Overbought/Oversold Oscillator for Nasdaq came down to the zero line in a hurry. I guess that's what happens when breadth has been lackluster for the last week for this index. The good news is that it is now on its way to an oversold condition.

The New York Stock Exchange's Oscillator has not come down nearly as much.

The two indicators I am watching closely are the number of stocks making new lows and the breadth indicators, namely the McClellan Summation Index.

The new lows for Nasdaq increased quite a bit on Monday, despite Nasdaq having an up day. The 10-day moving average of this indicator is just now flattening out. We'll see if it starts to rise. Keep in mind that it was rising for nearly two months this spring before it mattered, but either way, it has not yet begun to rise. 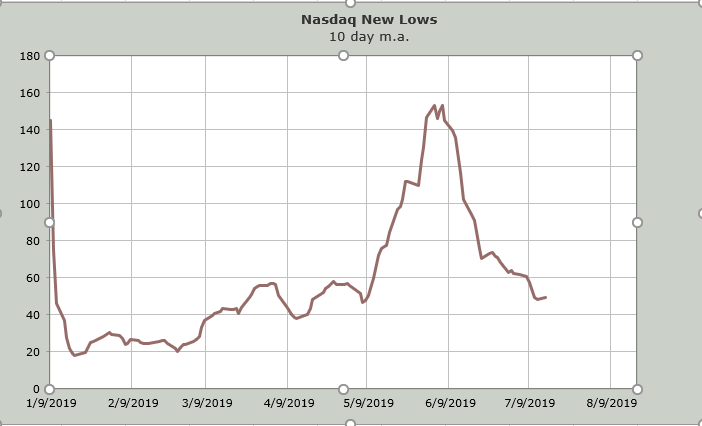 The NYSE didn't see much of a rise in stocks making new lows, but curiously the 10-day moving average has had a very minor tick upward. It's very minor. This indicator started up in earnest in mid April and the S&P 500 did not quit on the upside for another two or three weeks. So here too, we'll monitor this as the days progress.

Finally, the McClellan Summation Index continues upward. Once again, it won't take much to halt its rise, but remember it would then have to roll over so it would take more than one day to see any sort of trend there -- if it happens. Quite frankly, despite the Russell 2000 down so much on Monday, breadth on the NYSE was flat; it could have been a lot worse considering the financials and oil stocks were all down.

We are overbought and sentiment is still relatively elevated, so for now I expect a pick up in volatility in the next week or so. Should the indicators change their direction I will report that to you. It is always possible we digest the overbought reading and work off the too hot sentiment. It's too soon to tell.

With XL Fleet, Options Are Your Friend in Order to Define Risk

If the market stabilizes, I believe XL could excel to the upside.

Ring the Cowbell: Here Are Three Ways to Play the Jittery Market

Let's look at the move in bonds, how it will lead stocks -- and load the deck with some 'b-sides.'