By TIMOTHY COLLINS Aug 26, 2019 | 12:17 PM EDT
Stocks quotes in this article: AMGN, CELG, BMY, GILD, REGN, JNJ, BMRN, NBIX, ALXN
Amgen ( AMGN) is making a splash Monday by buying the prescription drug Otezla from Celgene ( CELG) . The deal will clear a merger hurdle set out by the Federal Trade Commission on the tie-up between Bristol-Myers Squibb ( BMY) and Celgene.
The $13.4 billion price tag surprised many on Wall Street as Otezla wasn't expected to fetch a value that high.
Otelza, an oral treatment for psoriasis and psoriatic arthritis, expands Amgen's dominance in this arena. The company already holds a blockbuster injectable treatment in this area with Enbrel; therefore, adding an oral option creates a strong duo. I'd view it as creating a vertical integration of sorts in terms of treatment options. Add in a cream blockbuster, and Amgen will hold the trifecta.
The question becomes: Did Amgen overpay? Given Celgene-Bristol had to sell to meet merger requirements, this should have been a situation where the pair struggled to get market value. We're talking about a forced seller rather than a desperate buyer, but I don't think the numbers are as bad as what headlines would have you believe.
Otezla had sales of $1.6 billion after 26% year-over-year growth. Amgen paid $13.4 billion but after tax benefits, that number will net out more like $11.2 billion. That means Amgen paid around seven times revenue on the net cost. The company also said it expects low double-digit growth on sales over the next five years. If we were to assume 15%, then the cumulative sales over the next five years should land around $12.4 billion, which means Amgen is paying less than six-times revenue as measured over the next five years. By comparison, Bristol is paying around 3.67-times Celgene sales, net of Otezla sales and sale proceeds.
While the multiple may be high compared to the Bristol-Celgene deal, Amgen currently trades around five-times sales. With a market cap north of $120 billion, this buy barely changes that overall multiple. Sure, names like Gilead ( GILD) , Regeneron ( REGN) , and Johnson & Johnson ( JNJ) trade at 4.5-times or less, but we could also examine other names like BioMarin ( BMRN) or Neurocrine Biosciences ( NBIX) trading at nine-times to 15-times sales. But Alexion ( ALXN) makes the most sense.
Alexion was a name just last week rumored to be a potential Amgen acquisition. Alexion trades at 6.15-times sales and that number would require a seven-times or higher reading for a buyout to happen. In comparing the two, buying Otezla, even for more than the market-deemed "right" price makes more sense on an integration and valuation standpoint than Alexion.
Examining the current technical picture on Amgen should give bulls some optimism and clarity. 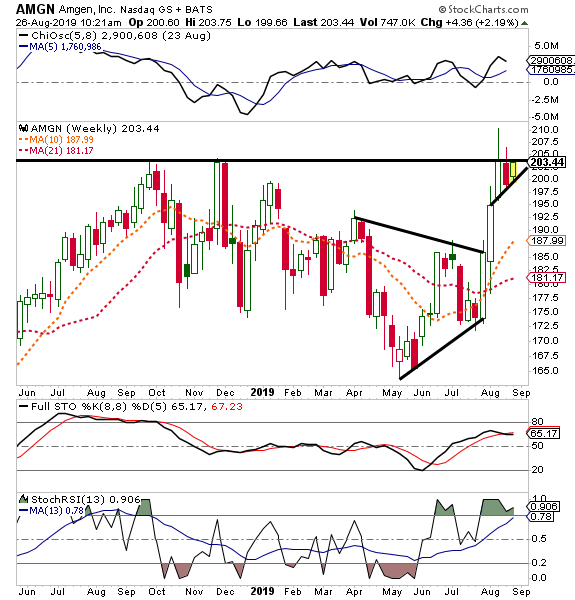 A weekly close over $205 should draw momentum traders in on the long side, while anything under $195 should be a stop or an area to aggressively hedge a long position. I'd keep a close eye on the Full Stochastics.
If this downturn swing picks up speed, then I'd expect muddled or even bearish price action for the next few months. Overall, though, I like Amgen and I don't think this is a bad deal. I view it more as a fair deal for both sides; therefore, if I were bullish on Amgen this would give me no reason to change my opinion. The same can be said for those with a bearish view. I lean more toward the bull side on this one.

Get an email alert each time I write an article for Real Money. Click the "+Follow" next to my byline to this article.
TAGS: Mergers and Acquisitions | Investing | Stocks | Pharmaceuticals | Stock of the Day