While natural gas and oil have gone in such different directions to the point that they forced a hedge fund out of business, the market is finally waking up to solar. Often, we see solar run when oil pushes higher, but the opposite is happening now. Natural gas prices have surged, but those are seldom interchangeable in the manner of oil versus solar.

This has created an interesting dynamic. Solar stocks have stopped falling even as oil continues to struggle. These divergences are worthy of note.

First Solar (FSLR) is often the first name traders turn to when it comes to solar. The stock has been beaten mercilessly since the summer, losing nearly half its value at one point. The shares are down 33% year to date and that's after a nearly 20% rally from the late October lows.

Many of the names in this group have been caught in the crosshairs of the trade war battle. While tariffs were meant to protect U.S. solar companies, the exact opposite has taken place. Unfortunately, many of the components for even U.S. producers come from China, causing productions costs to rise. 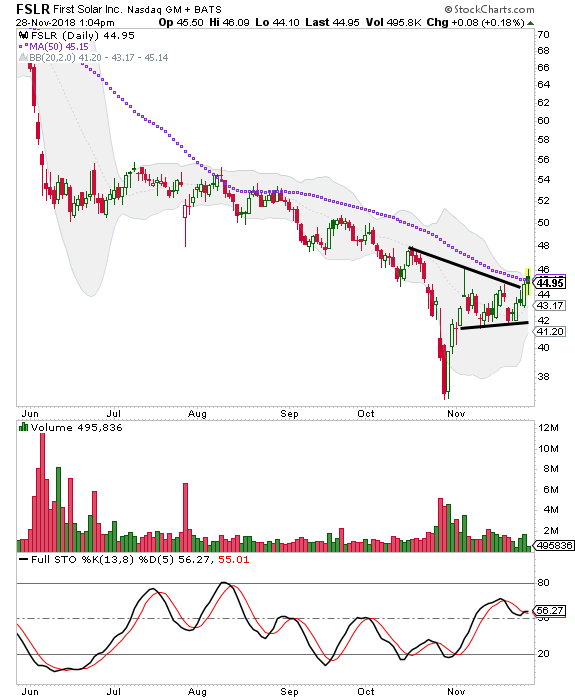 Despite beating earnings estimates last month, First Solar came up short on revenues and guided earnings per share lower for 2018 in addition to in-line revenue. It's no wonder the stock dropped hard after the Oct. 25 report of third-quarter numbers, but the tide is shifting. For the first time since the spring, First Solar is threatening to close above its 50-day simple moving average (SMA).

The stock appears headed back into the low $50s and any inkling of a U.S.-Chinese deal could push it there in a hurry. Even if there's a hint that tariff increases could be delayed, the market may interpret this as bullish and the 12% short-interest in First Solar may decide the big drop since the April highs are enough for them to seek trades elsewhere.

If First Solar closes back under $40, then the bullish thesis is dead and it is time for bulls to look elsewhere.

I'm in the bulls' camp here and believe brighter days are ahead for First Solar. This stock looks like a buy on a close over $45.

(Tim Collins is a regular contributor to Real Money Pro. Click here to learn about this dynamic market information service for active traders and to receive columns from daily columns and trade ideas from Tim Collins, Paul Price, Bret Jensen and others.)