There was a bright spot to be found amid the rubble on Monday. Kind of.

The bell had finished ringing. Financial markets had been crushed. Well after earnings season had ended, and long before earnings season begins anew, Oracle (ORCL) was set to report. In isolation. All eyes.

Adjusted operating margin of 47% provided for adjusted operating income of $5.6B, which was up 3% or 8% in constant currency. Oracle did declare a $0.32 quarterly dividend, up from $0.27 prior, bringing the forward yield up to 2%. This dividend will be payable July 26th to shareholders of record on July 12th.

Cloud Services and License Support drove $7.612B in revenue, contributing a 64% share toward the sales pie, and up 7% in constant currency.

Cloud License and On-Premise License drove $2.539B in revenue, contributing a 22% share toward the sales pie, and up 25% in constant currency.

Hardware drove $856M in revenue, contributing a 8% share toward the sales pie, and up 2% in constant currency.

Services drove $833M in revenue, contributing a 7% share toward the sales pie, and up 7% in constant currency.

As of May 31, 2022, Oracle had a net cash position of $21.902B on the books. This is down a bit since February, but with a nearly equal increase in accounts receivable. This left current assets roughly unchanged at $31.633B. This measures very well against current liabilities of $19.511B for a current ratio of 1.62. Though the firm does provide hardware, there were no inventories to speak of on the books in May. Hence, no quick ratio.

Total assets add up to $109.297, which includes $45.251B in "goodwill" and other intangibles. Total liabilities of $115.065 include $72.11B in long-term debt. This is the fourth consecutive quarter where Oracle's total liabilities outweigh total assets. Despite the positive looking "current" situation, you know that we can not like that.

Additionally, total debt dwarfs net cash and I do find it problematic that 41.3% of all assets are intangible. I like stuff you can look at, stand in/on, or at least count. Oracle's tangible book value per share, unsurprisingly amounts to $-19.13.

The firm did not provide any guidance in the press release. That came during the press conference. The firm acknowledged existing foreign exchange headwinds. This pressure is expected to continue. For the current quarter, Oracle sees adjusted EPS in a range spanning from $1.09 to $1.13. That would be up from the year ago comp of $1.03. The firm also sees revenue growth of 20% to 22%, which would put sales in a range of $11.64B to $11.83B. Management also projected 30% cloud growth for the full year coming.

I have counted eight sell-side analysts that have both opined on ORCL since last night and are rated at five stars by TipRanks. The tally is pretty split. I count four "buy" or buy equivalent ratings and four "hold" or hold equivalent ratings. The average target price of these eight is $92.63 with a high of $115 (Philip Winslow of Credit Suisse) and a low of $72 (Brad Reback of Stifel Nicolaus). The average target of the four "buys" is $105, while the average of the four "holds" is $80.25.

I am a little torn on this one.

Oracle reported a good quarter. The firm is expecting the current quarter to be solid as well.

The firm sees cloud growth strong going forward and that strength sustained. My only real beef is with the balance sheet, but the problems are longer term. The current situation is fine. Oracle can easily meet its short-to medium-term obligations. 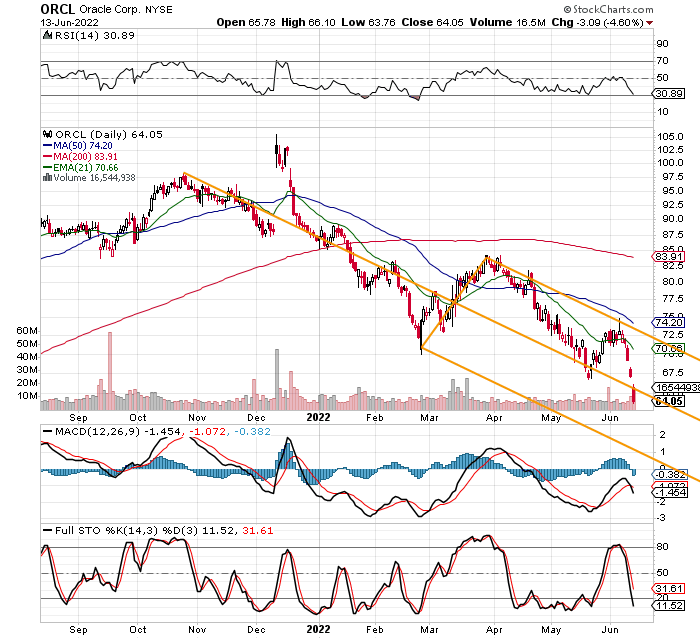 Given that the December high was a short-lived spike created by an earnings release (Hmmm), I have anchored this Pitchfork model to the October high. I think that better helps illustrate the downward trend in place since.

The stock had worked its way toward the center trendline, that is until this morning's gap up opening. This opening has pulled both the RSI and Full Stochastics Oscillator off of something very close to a technically oversold reading. This opening has also greatly improved the complexion of the stocks' daily MACD.

This is what I think. I think I will fade this rally, and wait if I want to be long this stock until it approaches the 21-day EMA ($ 70.79). I don't chase unless I see the 50-day SMA ($74) taken and held. Don't forget the "held" part. That means that it has to pass at least one test from the upside. You get that, you'll have momentum, not just an algorithmic burst.

In the meantime, an interested investor could probably sell August 19 $60 puts for roughly $1.50. Doesn't that sound better than paying $70+? I think it does.

Get an email alert each time I write an article for Real Money. Click the "+Follow" next to my byline to this article.
TAGS: Investing | Stocks | Technical Analysis | Trading | Software & Services | Technology | Earnings