It used to be there were stocks and they traded in eighths and quarters. Then we had options-puts and calls that expired monthly. And futures on stock indexes, which expired quarterly.

Then stocks started trading in decimals. And options began trading weekly. And we added exchange-traded funds. Now you can't just know a group in the market, you have to know which ETF expresses it best. If that weren't enough, you can "short" the market by buying an ETF, inverse ETFs we call them.

Despite all of this, the 20-day moving average of volume on the New York Stock Exchange is pretty much the same as it was back in the mid-2000s. It's as though we create so many new fangled instruments to trade and overall it still doesn't increase trading volume. In fact Thursday's trading volume was the lowest in three weeks for Nasdaq and about a month for the NYSE.

Breadth was OK. Considering what the S&P did, breadth was very good, considering what the Russell 2000 did, it was fair. But it did not change the McClellan Summation Index at all. That indicator halted its rise two days ago and has not yet rolled over. If breadth is poor on Friday I would expect it to roll over. Even that doesn't concern me that much, because I still think we should correct and rally again.

What concerns me is the sharp rise in the number of stocks making new lows. Nasdaq's new lows topped 150 on Thursday. That is the second day in a row that new lows were greater than new highs for Nasdaq.

Typically as we head into year end, we tend to see new lows rise, because we get tax-loss selling, but we don't typically see more new lows than new highs. And the 10-day moving average of new lows on Nasdaq is trying to turn upward. And it is doing so from a higher low than August. Shouldn't new lows be making lower lows not higher lows by now? 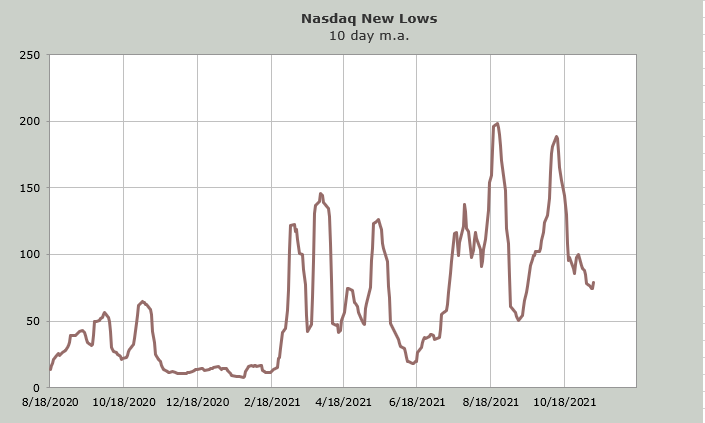 Over on the NYSE, the new lows have been hovering around 20 but on Thursday -- an up day in the market, for both breadth and the indexes outside the Dow Jones -- the new lows shot up to 52. I tend to use the 50 mark as a line in the sand. I feel as though we should not see more than 50 new lows when markets are at their highs, and that is what we saw on Thursday. 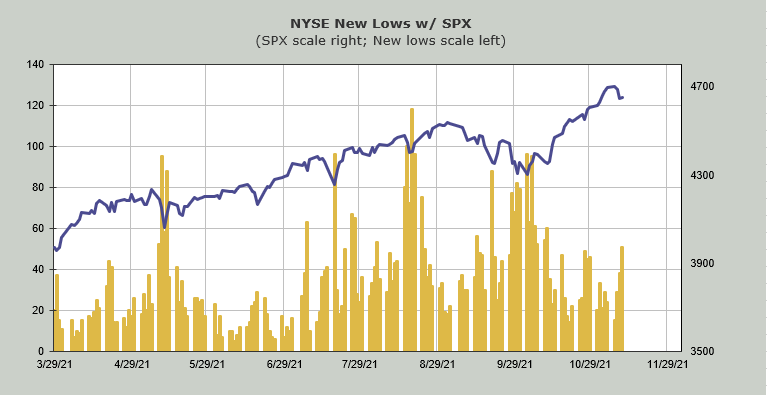 Sentiment is still fairly complacent, but not as complacent as it was. The American Association of Individual Investors is the survey that surprised me the most since bulls rose 6.5 points to 48%, which is the highest readings since late June. The voting for this ends on Tuesday and let's face it, the market hasn't been that strong all week, so this should not have gained so many points this week. 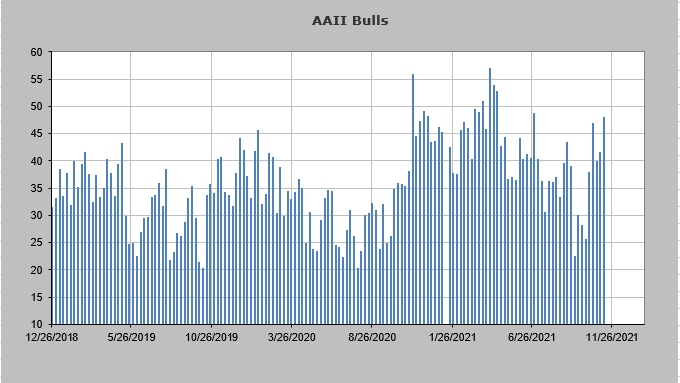 I still think this is a correction and we'll have another rally when it's done, but I thought you should know there are a few cracks beneath the surface now in terms of stocks making new lows.