Since I am trying to find positive thoughts these days as an antidote to all the negative news, I will begin by noting that March 19 is the day the swallows come back to Capistrano, Calif. It's true. In October, the swallows leave, fly all the way to Argentina and they return in mid March. Like clockwork.

Let's celebrate some of the normal things in life during these times.

There were some positives during Wednesday's session. For example, do you realize that despite falling well below Monday's lows, both the S&P 500 and Nasdaq closed over their Monday closing levels? It probably doesn't matter in the big scheme of things, but as I keep noting, at some point the selling will begin to dry up.

In addition, we made lower lows in all the indexes, but once again, the number of stocks making new lows has yet to surpass Thursday's peak reading. As a reminder, once we clock in a peak reading, there tend to be many tests thereafter -- months worth of tests. That means rallies and declines, often with those declines to lower lows. But for the last week, we have not seen an increase in stocks making new lows. The numbers are still very high, but at least through Wednesday there has been no expansion.

I have been asked if my Ovebought/Oversold Oscillator has ever been this low. It has. In fact, it has been lower: Twice in 2008, in October and again in November. Note, that means it wasn't that oversold at the lows. It was also more oversold in August 2011. Recall, too, that the low for that massive decline was in October, not in August.

The problem of course is that the credit exchange-traded funds continue to move down, even if they didn't close at their lows.

On the sentiment front, the Investor's Intelligence bulls barely budged last week. They are at 35%. I suspect that's because of Friday afternoon's rally. But the bears did finally move up, to 33%. While there are still more bulls than bears, the spread has narrowed quite a bit. At the December 2018 low there were more bears than bulls. 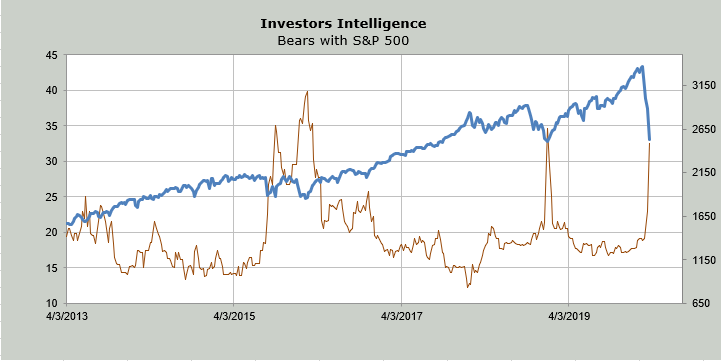 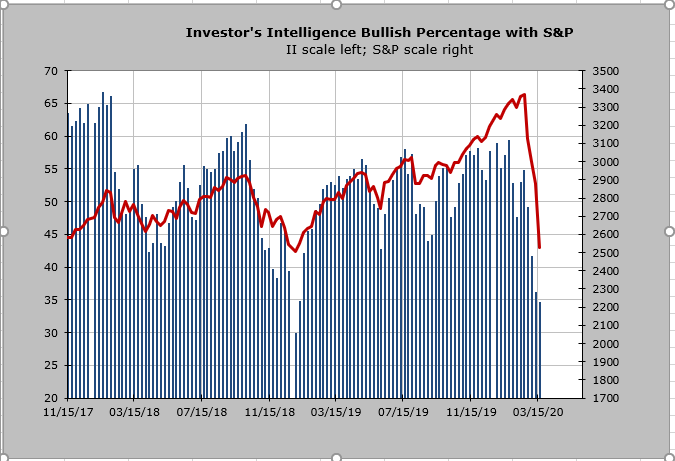 On a shorter term basis, though the Daily Sentiment Indicator (DSI) fell back under 10 for Nasdaq and the S&P. Respectively, they were 6 and 5. The DSI for the Volatility Index (VIX.X) moved back over 90 to 93.

Recall that in the fourth quarter run-up, every reading over 90 for Nasdaq resulted in a down day (sometimes more than one). During this decline, every single-digit reading has given us one up day -- and never more than one, though.

I'm going to continue to look for green shoots. We have to search for them but I'll keep looking.

Jim Cramer: Betting Against Science Is a Mug's Game

The buyers have decided that the researchers and doctors are going to beat the virus, so you better get on board or miss the move.

This Stock Is Now Right in My Element: Electric Vehicles

Here's my approach on Net Element as it enters a reverse merger agreement with EV company Mullen Technologies.

ADP's Wednesday report and the end of the lockdown employment rebound leave us with underlying trends that appear ugly.

The challenge of this market is catching intraday movement.

Is It Inflation or Deflation? You Can't Have Both

Let's pick apart what's going on, and why we should worry about stagflation.