Lines in the Sand

On Friday the S&P 500 breached its own 50-day SMA (simple moving average) to the upside. That may not seem like a big deal to a lot of folks, but the truth is that there are human portfolio managers who react to the 50- and 200-day lines more so than they do a lot of other technical lines. That momentum carried into Monday as the Dow Jones Industrial Average and the Nasdaq Composite both crossed the level as well. The DJIA managed to hold the line. Unfortunately, the DJIA is important to journalists, not so much to money movers.

Markets turned later in the day, closing close to the lows of the session as the Nasdaq Composite surrendered that focused-upon level. Is this minute event amid a long stretch of positive days across all indices, something to focus on? Well, it could be. How's that for noncommittal?

Trading volumes at least have stopped declining. I still have doubts about where the funds stand at this time. I mean, they're never all out, so of course there is broader benefit to upside movement, so patience is still the rule it seems. We can be patient as well.

The big kids will play in the sandbox at some point. They wait. Sure, tariffs on all things Mexican have been avoided, but even that came with threats and deadlines. As 6,000 Mexican troops head for their southern border, they'll have 90 days to produce results or "further actions" will be taken. There is talk of meetings, or what might be called "progress reports" in the interim, perhaps at 30 or 45 days. In May an incredible 130,000 illegals were apprehended at the border that the U.S. shares with Mexico. How many got through undocumented? How far off can a "safe third country" be? Therein lays the issue.

The trade/cold war with China rages on. At least, overtly, the underlying reason for the conflict between the U.S. and China is cross-border commerce. I suspect that the real drive there is influence, but that is not a stated goal. With Mexico, conditions of trade were used as a tool for the implementation of foreign policy having nothing to do with commerce, even though a trade deal had already been agreed to. This is important, gang. It seems that the president of the United States certainly rattled some cages and produced a preliminary result that he finds acceptable.

Understand this. Though I do not approve of the use of tariffs in this matter, at least overtly, I am simply trying to evolve to the environment provided in real time. Lines once crossed do not usually uncross. This means that the U.S. is likely to go back to this tool when the administration finds that it may be useful.

U.S. leaders have always defended U.S. interests. That will never change. The U.S. is also home to the desired market for just about everything there is. This administration chooses to use that economic leverage rather than send infantry divisions. Sounds a little better when put that way, doesn't it? Volatility is probably a little underpriced at this point, sitting in between the 50- and 200-day SMAs.

So, money movers are yet to be all in on this rally despite dovish signals sent from the Federal Reserve. If we are uncertain, why should they not be. I only worry about me. They have customers to answer to. I don't envy that in the least.

Listen, the Atlanta Fed's model for second-quarter GDP is mired at 1.4%. Even if yields for U.S. two-year paper right on through the 30-year bond have gapped significantly higher overnight, the curve remains badly mangled. Sustained growth unsupported by perverse policies, either fiscal or monetary, remains elusive. Despite persistent confidence across small businesses, and consumers, when the big money is once again confident, the Bloomberg Commodity Index will not look like this. 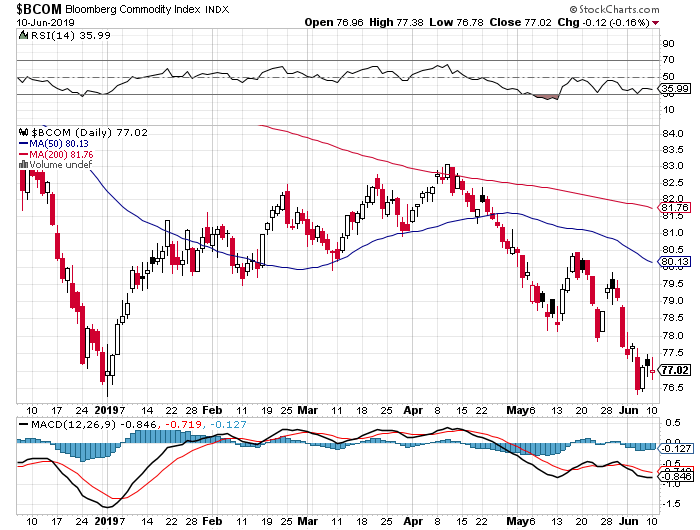 This is in an environment where the U.S. dollar is finally showing signs of weakening.

OK, I know that traders barely notice when the JOLTS (Job Openings and Labor Turnover Survey) number for job openings hits the tape. This time, I found it interesting as ADP and the Bureau of Labor Statistics (BLS) seemed to agree -- according to their seasonal adjustments anyway -- that hiring took a powder in May. The April JOLTS number printed at 7.449 million open positions on Monday. The aggregate number of unemployed Americans participating as part of the labor force for April was 5.824 million.

This 1.625 million gap between unfilled positions and the number of those actively seeking employment is a new record since we started tracking these things back in 2000. Where are these jobs? Education and construction, as you might have expected, but also in retail. That one for me came out of left field as retailers appeared to have a somewhat awful earnings season, and one might think that hiring across that industry would be in contraction. Apparently not, at least not in April.

The president does get a lot of criticism when it comes to his outspoken opinions on monetary policy. On Monday, the president piled on, saying "They raised interest rates far too fast. That's number one, Number two: they did quantitative tightening: they were taking in $50B a month. Fifty Billion a month. And they've now eased that, but it's still $25B a month, which is ridiculous." The president went on to discuss how this put the U.S. at a disadvantage in negotiations with China, but take a look at the quote.

Perhaps he could be more eloquent. Perhaps not. Facts are facts, though, and what President Trump said about the Fed on Monday is basically exactly what we warned the Federal Open Market Committee (FOMC) about throughout 2018, in particular late in the year, over and over again as the damage became obvious.

The president is not wrong here. Not even close. The U.S. Treasury yield curve is proof in the pudding. This is why the Fed needs to act on short-term rates. It has nothing to do with macroeconomic performance, though a slowing that now seems evident would also be the result of last year's aggression at the FOMC. There needs to be at least one 25 basis point reduction in the fed funds rate, with a statement that this would be a technical adjustment made to correct a past error and not in response to current economic conditions. So easy, yet so many make it so hard. I am here to help and I answer e-mail. Jay, I'm talking to you.

You'll notice that as Advanced Micro Devices Inc. (AMD) has announced a new lineup of products, and as Microsoft Corp. (MSFT) sets the table for a new X-Box using AMD as its supplier the stock finally has completed the round-trip, a 100% retracement of the September through December selloff. All hail Lisa Su. 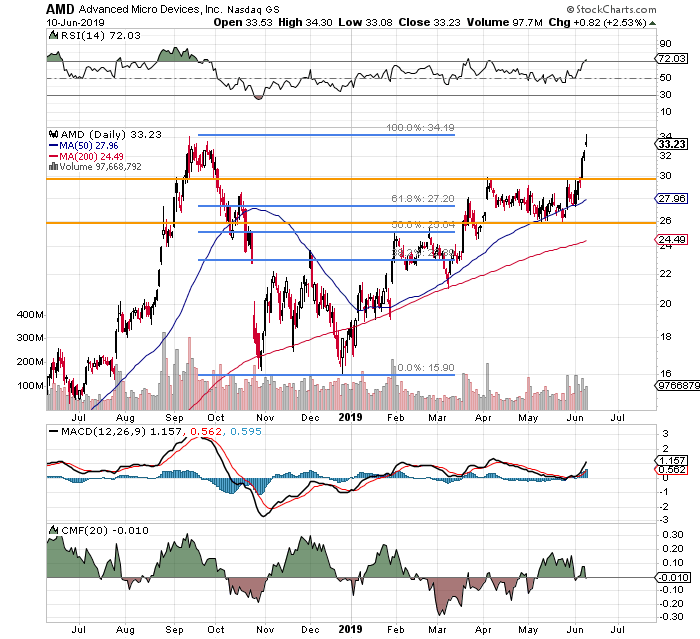 By the way, as this round trip comes to completion, the shares in June have broken out of the flat base trading range that they had been mired in for most of the spring.

The semiconductors industry is in a tough spot as inventories may not wind down quite as quickly as some had predicted. However, there are going to be some winners. It isn't just the AMD deal with Microsoft, but now it appears that Broadcom Inc. (AVGO) has landed a coveted supply deal with Apple Inc. (AAPL) . Broadcom reports on Thursday.