Oil traders appear to be in a slippery place here.

The decline in oil prices from $130.00 per barrel to $80.00 per barrel is hard to swallow, but it's in line with the long-term up trend on a weekly chart basis. This can mostly be explained by the premise that oil prices spent several weeks trading above what would have normally been a comfortable up-trending channel -- had Russia not invaded Ukraine.

Nevertheless, oil traders find themselves in a conundrum between the harsh treatment buyers have received on short-lived rallies since breaking below $100 per barrel in July and the obvious trendline support near $80.

In the short run, we think buyers might win the battle to garner a less impressive rally than the bulls are used to, but some relief nonetheless. But in the long run, we believe the bears will eventually win the war leading prices to a more natural level, at least in a post-fracking world, near $60.00. Some recent events that might give the bulls confidence are recent production cuts made by OPEC+ in an attempt to stave off selling and the Biden administration's mulling of placing large buy orders at and around $80.00 to replenish the Strategic Petroleum Reserve. While selling high and buying low is a great trade, the artificial demand created by SPR buying will work against the goal of inflation reduction. Further, recent weakness in oil prices can be attributed to demand destruction, largely Chinese Covid shutdowns, but the supply side of the equation has merely moderately improved; this should offer some support to pricing.

We don't have a crystal ball, not one that works anyway, but when trying to project the next possible move in oil we focus on traditional annual cycles, how speculators are positioned (per the Commitments of Traders Report) and how investors are feeling (Consensus Bullish Sentiment Index), currency movements, the media narrative, and fundamental story, but we put the most faith in the chart itself. Let's take a look at the current environment.

Seasonality should prevent any big oil spills from occurring until later in the year. More often than not, oil prices in Cushing Oklahoma (known as West Texas Intermediate light sweet crude oil) tend to be closer to an annual high in early-to-mid October (similarly, the price tends to be near an annual trough in January). Seasonality isn't a trading strategy, but it is a nice guide that should be given credence. 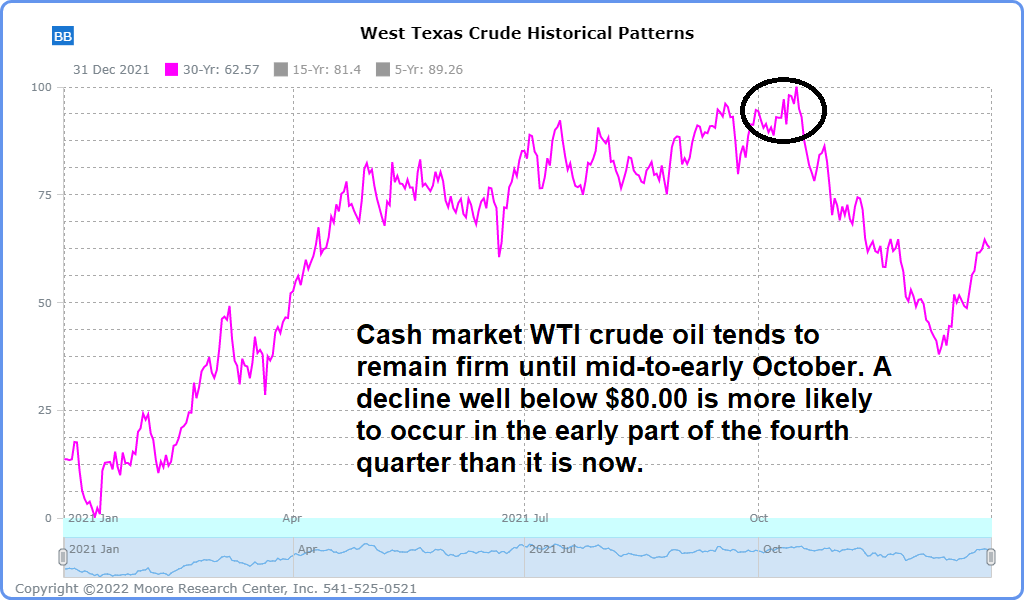 According to the latest Commitments of Traders Report issued by the CFTC (Commodity Futures Trading Commission), large speculators, those with deep pockets and substantial position sizes, were net long just over 200,000 contracts. This tells us the biggest investors have cut over 60% of their bullish positions and are currently holding the smallest net long position since the 2016 lows, which preceded a $50 rally as speculators rebuilt bullish positions. This could be a sign the majority of speculators have liquidated under duress and it opens the door for a near-term bounce.

Although it seemed unlikely in early 2022, the U.S. dollar index has rallied toward a multi-year trendline that will likely lead the currency to 113.40 in the coming weeks. But it took an unlikely mixture of unprecedented Federal Reserve rate hikes and a flight to quality triggered by fear of a world war to make 20-year highs possible. At some point, the unusually bullish dollar news will have run its course. Further, the relative strength index, or RSI, on a weekly chart is showing divergence between the oscillator and market price. As the market has made new highs, the indicator has made lower highs. This is often a sign of a pending reversal, yet such patterns can take quite a bit of time.

Our guess is the level that the dollar rally is finally rejected will be somewhere between current pricing and 113.40, but likely the latter compliments of this week's hot consumer price index print. This is important because the unfathomably strong dollar will likely continue to be a headwind to crude oil prices; at least for now. Over the last 60 days, oil futures and the US dollar index futures contract have settled in the opposite direction about 70% of the time. Thus, it doesn't mean that oil can't forge a bounce alongside an extension of the dollar rally, but the stronger dollar will likely act as a plow dragging behind it.

To analyze a market, it is generally a good idea to get a bird's eye view before narrowing in on the current scenario. Revisiting the monthly chart of WTI crude oil futures reminds us that the price of oil has fallen back into the trading range that existed, and would have likely persisted, prior to the war in Ukraine. The war triggered a breakout above trendline resistance in the mid-$90.00s and prices hovered uncharacteristically above the trading channel for months before falling back into the range.

This trendline will attempt to act as resistance to rallies; at this time that price lies near $93. Yet, support near $80 is just as compelling; the sharp trendline from the March/April 2020 lows came into play as oil tested $80 last week. Adding credence to this support level is the psychological aspect of breaking below prices that, before the war in Ukraine, hadn't been seen since fracking exploded in 2013/2014. This currently leaves the price of oil in a neutral zone between $80 and $93.

The weekly chart of oil is more convincing for those looking for a rebound; the line in the sand is clear, assuming $80 continues to hold its ground there is potential for an upswing. We aren't in the camp that believes oil prices are going to new all-time-highs near $150, but we do believe the odds are in favor of some seasonal strength that allows price action to explore resistance areas in the mid-to-low-$90s; specifically $93 (downtrend line resistance) and $98/$100 an area that has been pivotal in 2022 as well as during the oil booms in previous decades. If there is a game-changing fundamental story such as China abandoning its zero-Covid policies or a flare-up in violence in oil-producing areas of the world, the price of oil could make its way to the top of the trading range near $114.00 but this is not expected at this time. If seen, this would likely be a bit of a last hurrah rally and an extraordinary opportunity for bears.

While we maintain the premise that oil will see a $60.00 handle sooner than most believe possible, we are likely entering a period of price discovery that sees prices rebound moderately into the $90.00s before selling resumes.

Get an email alert each time I write an article for Real Money. Click the "+Follow" next to my byline to this article.
TAGS: Commodities | Futures | Investing | Oil | Stocks | Energy | Oil Equipment/Services