The Selloff That Wasn't

On the surface, broader U.S. equity indices gave up some ground on Monday in response to the attacks made over the weekend on Saudi oil production. Think about it, though. Equities came into the weekend "at least" close to overbought, or by some metrics... certainly overbought. A selloff of greater magnitude could have been put together for that reason alone, let alone as reaction to a headline level downside catalyst. That is, if the marketplace was looking to sell off. It clearly was not.

Both the S&P 500 and the Nasdaq Composite surrendered less than one third of one percent for the day. Trading volume was not a significant factor. In fact, market internals somewhat contradicted the broader market direction. At the NYSE, advancing issues beat declining issues, new highs trounced new lows and advancing volume printed well above declining volume. At the Nasdaq market site, decliners did beat advancing issues, but volume was notably lower. Oh, by the way... the small-caps were hot yet again, as both the Russell 2000 and the S&P 600 score gains for the session.

Taping on the Foil

What does this all mean? Simple. Eight of the eleven sectors that comprise the S&P 500 saw broad declines. Excluding what we refer to as bond proxies, only the energy sector attracted broad positive action, and plenty of it. That's where the volume was for the large-caps. That, and the defense and aerospace industry, which is not a sector but a sliver within the Industrial sector. The Industrial Select Sector SPDR ETF (XLI) closed down small for the session, under the weight of the transports, especially the airlines, but check this out... The Dow Jones U.S. Defense Index scored gains of more than 2% for the session.

The Dow Jones Defense Index closed at all-time record levels, above the highs of early 2018. The runaway leaders within the industry were two unmanned aircraft (drone) manufacturers, Kratos Defense (KTOS) (+5.4%) and the lightly traded AeroVironment (AVAV) (+4.4%). That said, anyone who makes, or works on high-end military-grade aerospace equipment pretty much scored gains of at least 2% -- including L3Harris (LHX) , Mercury Systems (MRCY) , Raytheon (RTN) , Northrop Grumman (NOC)  and Lockheed Martin (LMT) . Lockheed, by the way, closed well above our $390 price target for the second time this September. The $390 level has already been ratcheted up from our original target of $375. 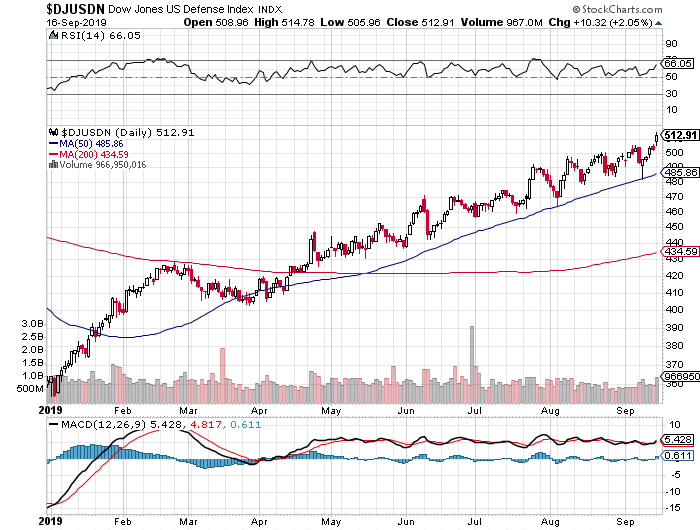 You know what this means, right? You have to sell, Sarge? Not necessarily, but a disciplined trader has to act in some way. Speaking just for me (and some people from Tennessee), a partial sale or even a "good til cancel" Stop-loss order would suffice. These shares will spike further upon any initiation of multilateral hostilities in the region. The shares will also lose the level should there be a less-violent conclusion to these tensions. I don't tell you what to do with your money. I do tell you what I'm doing with mine.

For home-gamers who happened to have missed Monday night's episode of Jim Cramer's "Mad Money" show at CNBC, I thought the segment excellent covering the software/cloud industry and using "The Rule of 40" as a determinant factor in figuring out just how to cross fundamental corporate health with justifiable valuation. A couple of Sarge faves did well in passing the test (psst... one of them reports tonight), but I won't try to steal Jim's thunder. He did the work, you folks who do value his efforts, will likely benefit yourselves. Bring something to write on and something to write with.

Oh, let me tell you something about that guy, Jim Cramer. My entire career, I went about my business under the false assumption that I could never be out-worked. Never. Nobody else would put in the hours. Nobody else would spend the intellectual capital trying to figure out the minutia. If they did, I would just elevate my game. Then I met this guy -- and I knew that I wasn't even in his ballpark.

Nope. Let's call it "the reach for content", shall we? The Los Angeles Times reported on Monday that Netflix (NFLX) had reached a five-year deal that would include the streaming rights to broadcast all 180 episodes of the 1990's sitcom "Seinfeld." Word is that Netflix will pay more than the $500 million that NBC Universal paid to take "The Office" away from Netflix, or the $425 million that WarnerMedia paid to pull "Friends" away. The reason would be that those firms are launching competitive businesses in this space, and are bringing home their own material. 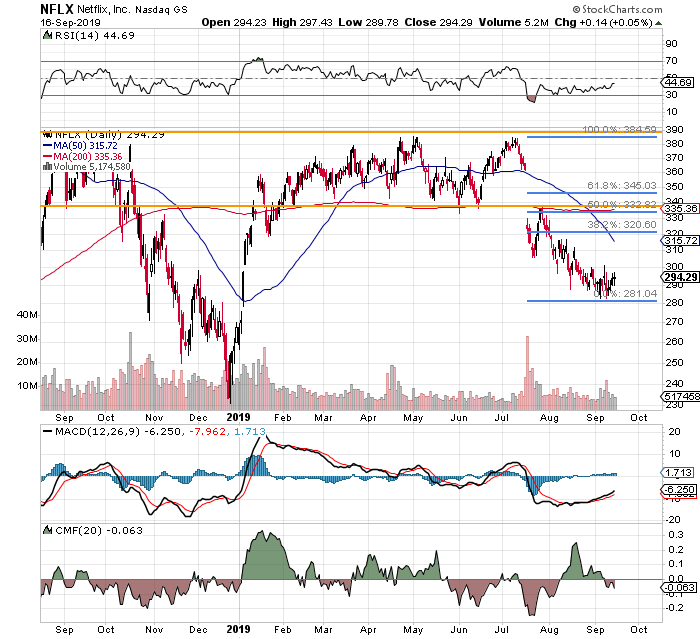 Speaking of the competition, "Seinfeld" has been available to streaming fans and still is until 2021 at Hulu, now controlled by the Walt Disney Company (DIS) . Hulu's current contract for Seinfeld had been a $150 million per year deal that concludes in time for the Netflix deal to begin.

Can Netflix continue to compete with owners of much broader content catalogues? The firm has kept up performance to date. Mostly. Still, revenue growth has fallen into the low to mid 20%'s in 2019, down significantly from 2018. Earnings have contracted year over year in two of the three prior quarters. The firm must borrow in order to pay for everything, from production of home-grown product to popular reruns, where as competitors can mix in large volumes of legacy content.

I am not saying that Netflix can't compete. I am saying that in my opinion, all of the low hanging fruit for this operation has been picked clean. Now, it's a fist fight with the likes of Disney, Amazon (AMZN) , Apple (AAPL) , Comcast (CMCSA) , AT&T (T) , CBS Corp. (CBS) and more.

Netflix has benefited in recent quarters at least from rising margin. There is clearly, at this point, downward pressure on control over price points across the entire streaming landscape. In the meantime, Netflix will try to move forward with a Current Ratio of just 0.85 and a Quick Ratio of 0.79. The implication any time an investor sees these ratios below the full 1.0 level is to proceed with caution. Sounds odd for a $128 billion company.

Why do I bring up Netflix today? The stock in recent days has shown signs of bottoming, finding support just above $280 twice in September. I am currently running with a small short position in this FANG name, and I suspect some readers may be as well. Notice that Relative Strength is returning to a healthier look, as is the still pretty gross daily Moving Average Convergence Divergence.

For the long crowd, that $281 level would be my wake up call. For the short sellers, it would not be crazy to see this stock rebound as high as the 50-day simple moving average ($315), or the 31.8% Fib retracement level of $320. Should these shares ultimately regain the lower bound of the flat base that ran from February through July, then this chart has changed and all bets are off.

Party on, dudes. The FOMC policy meeting is in session. What to weigh? A more-relaxed yield curve that is still too flat, and a three month / ten year spread that is more important than the two-tear / ten year spread? An ECB, whose actions will likely drive investors back into the long end of the U.S. curve by November? A struggling Chinese / Global economy that will be further slowed by higher energy prices. A U.S. economy that sort of hangs around somewhere in between breaking out and falling apart, that may see a real lift-off in consumer prices due to these higher energy prices, even if certain sectors of the U.S. economy stand to benefit greatly -- as might the trade deficit?

I am sure that many readers did notice that futures markets trading in Chicago as of Monday evening were pricing in a mere 61% likelihood that there would even be a 25 basis point reduction made to the Fed Funds Rate at Wednesday's conclusion to this FOMC meeting. A 39% chance that no reduction is made at all. The markets would, in my opinion, react to such an event with a certain level of anger.

That said, there will not just be a press conference on Wednesday, but also economic projections going forward. Now, I rarely feel sorry for the Fed, but really, with the trade war / trade peace such an obvious unknown, and with geopolitical concerns in the Middle East also a question mark, and then considering the Fed's usual elite level of consistent inaccuracy, I just done' know how anyone places a dot anywhere on the plot with any confidence.

Imagine if the Fed stands pat, and comes off hawkish, trade negotiations conclude poorly and the U.S. consumer gets hit over the head by higher expenses associated with both tariffs and higher energy costs? Know what? Let's not imagine. Let's just use the brains we were given and pressure the short end of the curve.

Get an email alert each time I write an article for Real Money. Click the "+Follow" next to my byline to this article.
TAGS: Economic Data | Economy | Investing | Markets | Stocks | Technical Analysis | World | U.S. Equity | Global Equity