A long time ago. Vacation. Hiking the red rocks of central Arizona. Alone. Of course alone. Best way to take in nature... to free the mind of all traffic. Dog tracks, or maybe coyote. Neither here nor there, Let's follow, and see if we can sneak up on something out here. Have always tried to see how close I could get to animals in their habitat before they realize I'm there. Usually can't get too close.

Difficult to follow, as much of the trail is hardened ground. Then, softer mud around a puddle. Wow... some nice definition. A bitter swallow. Hair stiffening on the back of the neck. Slowly, crouch low, and move toward cover. Not that it would help. Those highly defined tracks had no visible claws. Had three lobes toward the heel. I may be an idiot -- actually, no "may be" about it. That's no canine, I've been tracking a panther. You folks out West call them mountain lions. Seems a bit too fresh for my liking. How quickly one's perception of what's right in front of you can change.

Remember how sanctions on Iran, the entire mess in Venezuela, and production cuts made by OPEC and their allies had put some wind in the sails of crude oil markets as inventories were expected to balance? Yeah, well, the horses are out of that barn.

OPEC and its allies meet later this month in Vienna. Just what does the cartel do as its power over pricing continues to ebb, and ebb quite rapidly? Some of these nations will need to produce revenue, even if the price is not right. The report form the IEA here on Friday suggests that the planet will only need an aggregate 29.3 million barrels per day in production from OPEC nations in 2020. In May, OPEC pumped out 29.9 million.

Incidents such as what happened on Thursday in the Gulf of Oman do put a short-term scarcity value into the commodity, but even the pop in Brent and West Texas Intermediate (WTI) futures pricing that markets experienced on Thursday are smaller in nature and less sustainable than they might have been in years gone by.

Listen, gang, I have always liked to line what I call my dividend book with exploration and production names that could pay their bills, as for the most part the group still pays shareholders handsome dividends while exposing the investor to potential benefit in a better macro environment. According to FactSet, for the first quarter of 2019 the energy sector saw aggregate earnings "growth" of a negative 26.6% vs. the S&P 500's negative 0.3%. Energy profit margin hit the tape at 4.6%, the S&P 500... 11%. See where I'm going here? Expected revenue growth for the second quarter? For the S&P 500, something close to 4%, for the energy sector around 1%, and that likely needs to be revised lower.

I am not saying that equity traders should run for the hills, at least not completely. Energy is a necessary part of diversification. I will say that I have pared back on exposure to production and reallocated funds toward refining the commodity as there is so much product currently in inventory. In other words, I have long since exited Exxon Mobil Corp. (XOM) and reduced BP (BP) . I maintain Royal Dutch Shell (RDS.A) as it has performed relatively well. I will likely reduce Chevron Corp. (CVX) now that my position has returned to the plus side and have entered back into Valero Energy Corp. (VLO) as that name out-yields CVX.

Earlier this week, at a Business Roundtable discussion in our nation's capital, JPMorgan Chase & Co. (JPM) CEO Jamie Dimon was quoted as saying, "I think the biggest self-inflicted risk to growth today would be trade going south." Dimon added in reference to the possibility of the administration moving forward with a 25% tariff on another $300 billion of Chinese exports to the U.S., "It adds to the risk of pushing into a downturn, it's just raising the risk of a bad outcome."

Also from Washington, at the Peterson Institute on Thursday, White House economic adviser Larry Kudlow stated, "President Trump has indicated his strong desire for a meeting, but the meeting is not yet formally arranged" in reference to the G-20 summit later this month in Osaka, Japan. Then, ominously, Kudlow added, "He's also indicated that if the meeting doesn't come to pass, there may be consequences."

All this passed while more than 600 companies were signing a letter urging the administration to avoid further raising of tariff, and to get back to negotiating with Chinese leadership on a deal. Meanwhile, the Chinese economy showed signs of increased deceleration for both industrial production and fixed-asset investment for May, while somehow retail sales reversed back toward trend after an anemic print for April.

Speaking of China... Broadcom Inc. (AVGO) on Thursday night reported a fiscal second-quarter earnings beat on growing yet disappointing revenue. The stock was off around 10% in trading before Friday's opening bell, dragging nearly every semiconductor name down multiple percentage points. Plainly put, in my opinion, broad-based equity index futures should be down significantly in overnight trading, but simply are not. All hail the Federal Reserve put.

For Broadcom, margins expanded and Infrastructure software carried the day, while Semiconductor solutions and Intellectual property licensing contracted badly. Is that why the shares are down so badly?

Let's get granular. Broadcom guided full-year revenue to $22.5 billion versus a Wall Street consensus that had been up at $22.96 billion. In addition, Broadcom cited the U.S. ban on exports to Chinese telecom Huawei Technologies as producing a potential $2 billion negative impact on that revenue. Finally, traders had priced in expectations of an increased dividend, with rumors spreading that the increase might be sizable. No dice. The dividend was left at the still-attractive quarterly rate of $2.65, where it has been since the fourth quarter of 2018.

CEO Hock Tan did not seem at all upbeat on Thursday evening. Tan was quoted a saying, "We currently see a broad-based slowdown in the demand environment, which we believe is driven by continued geopolitical uncertainties, as well as the effects of export restrictions on one of our largest customers."

My thoughts are this. I am not in AVGO. I am not going to be anytime soon. If you think the trade war with China has all the makings of a cold war, then you don't need this risk. If, however, you think Presidents Trump and Xi shake hands on some kind of dressed-up but limited deal at the G-20 in Osaka, then this discount is what you have been waiting for.

The Atlanta Fed will revise its GDPNow snapshot of second-quarter economic growth after interpreting the May data for Retail Sales and Industrial Production coming out here on Friday morning. The model currently stands at 1.4%, and this revision could put a mid-morning wiggle in equity performance. Stay alert.

Fill the Gap? Or the Cup?

What Morgan Stanley did on Thursday by raising its price target for The Walt Disney Co. (DIS) from $135 to $160 was to fill the cup. (You may recall that on Monday, I informed readership that I had raised my price target for DIS from $140 to $170).  The premise behind Morgan's opinion was expected strength across Disney's streaming platforms. We'll go into all of that on another day, when we really feature Disney, but I wanted to show you the chart. 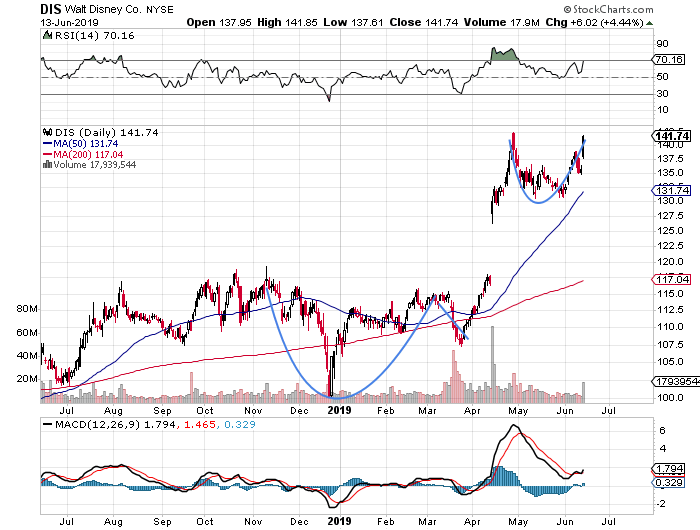 If so, we still would need to see a handle form, which would mean that investors will get another chance for entry better than the last sale if I (and now Morgan Stanley) are correct about Disney, which is a holding of Jim Cramer's Action Alerts PLUS charitable trust.

The daily moving average convergence divergence (MACD) is positioned bullishly coming off of the Thursday romp, but Relative Strength has once again touched 70. Last time that happened the stock gave up a rough 10 points. I don't think we see that kind of selloff this time. If we did, we would not have a handle -- we would just have a plain old selloff.

There is a good chance that those interested will be able to sell July 19 DIS $135 puts for better than $1.62 (where they went out Thursday night) on early weakness here on Friday morning. Not a bad entry if you think like me that the share price goes higher, and a nice steak dinner for the family if the shares are never actually put to the trader.