With the collapse in oil these last few days, someone actually commented to me that the trade is now long tech, and short energy. How can one disagree, except that I made this very point in ... June. Over and over again.

How many times did I show this chart of gasoline in early June? This chart looks a little different, because this is the September contract and we were looking at July gasoline then (so the prices are different), but the chart remains the same. The failure to make a new high in early June coupled with the stories about five dollar gasoline in the U.S. and that upcoming special on Exxon (XOM) on CNBC. Not to mention the Daily Sentiment Index was at 95 for crude oil and gasoline.

In early July, gasoline broke that big uptrend line and has continued lower, with these last two days coming down hard. I don't think sentiment is as bearish as it could be or could get, but I do know that there is some good support around that blue line (2.70).

I have been back at my desk two weeks, and I haven't once heard a call for $200 oil, yet that was so common in June. I even commented in June and several times since, that my inbox used to be filled with tech stock questions, but in May and June it was filled with small energy stocks. Now it is slowly starting to be more tech than energy.

It is not extreme yet, but I think it is enough that we should see a bounce next week.

The whole week this week has been a chop-fest because if we didn't have Wednesday's rally then it's been mostly sideways. That's the overbought condition being worked off. You can see it on the chart as the Oscillator comes down.

What I don't like, though, is that for the last week the number of highs has been contracting, yet Nasdaq keeps lifting upward. I call it the index-mover effect as the stocks like Apple (AAPL) move up, but everything else treads water or shuffles around. 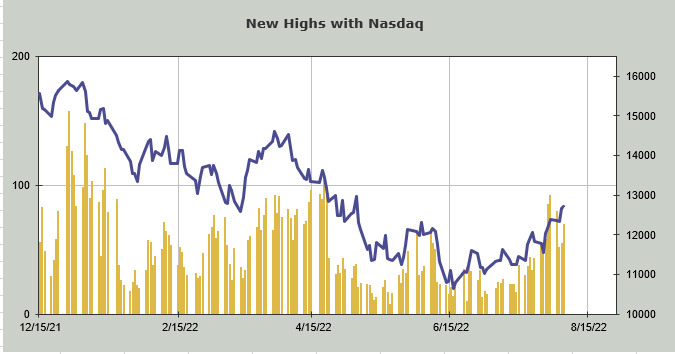 Then there is sentiment. The American Association of Individual Investors bulls are at 30%, which is up from 18%, but not extreme. The bears are at 41%, down from 59%. So this survey still has more bears than bulls.

The National Association of Active Investment Managers (NAAIM) has lifted its exposure to 55 from a low of 20 in June. We'll call this more neutral. Really, what we ought to call it is the shift is occurring, but it is not as fast as it was in other rallies this year. 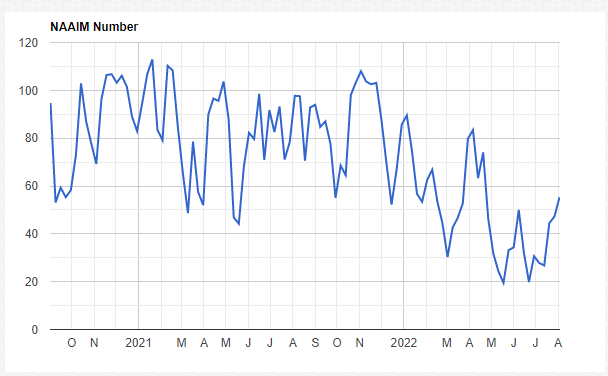 I still think we should work the overbought reading off and rally again. The one thing bulls do not want to see is energy and banks going down, while tech goes up. We've been there before and we know what that does to the indicators and breadth. And narrow markets are never good.

(AAPL is a holding in the Action Alerts PLUS member club . Want to be alerted before AAP buys or sells stocks? Learn more now. )

Get an email alert each time I write an article for Real Money. Click the "+Follow" next to my byline to this article.
TAGS: Investing | Stocks | Technical Analysis | Energy | Technology |