For his first Executive Decision segment of "Mad Money" Wednesday, Jim Cramer sat down with Jay Snowden, president and CEO of Penn National Gaming (PENN) , along with Dave Portnoy and Erika Nardini, founder and CEO, respectively, of Barstool Sports. Earlier Wednesday, Penn National announced it had taken a 36% stake in privately held Barstool, news that sent its shares soaring 10.7% by the close.

Nardini said Penn National was the right partner for Barstool as both companies share in the vision of building a winning sports betting brand and something special in the gaming space. Barstool currently has more than 66 million monthly users.

Cramer said Penn National, combined with Barstool, is the gaming stock to own. I don't like to gamble, so let's check and see what the charts look like.

In this daily bar chart of PENN, below, we can see a bottom pattern from March through October. Prices broke out on the upside in late October as they moved above the highs of August and September. The slope of the 50-day moving average line turned positive in September and it moved above the rising 200-day moving average line in November for a bullish golden cross. The On-Balance-Volume (OBV) line made its low in August and has moved higher since then, telling us that buyers of PENN have been more aggressive. The trend-following Moving Average Convergence Divergence (MACD) oscillator moved above the zero line in October for a buy signal and it has stayed above the line.

In this weekly bar chart of PENN, below, we can see that after a rally in 2017 PENN topped out around $36 and then made a 50% correction down to around $18. Prices are now back above the rising 40-week moving average line. The weekly OBV line finally made its low in August of last year and now is on the rise. The weekly MACD oscillator is bullish after crossing above the zero line in November.

In this daily Point and Figure chart of PENN, below, we can see PENN's recent strong rally without a price gap. The size of the base allows for a potential upside price target in the $40 area. 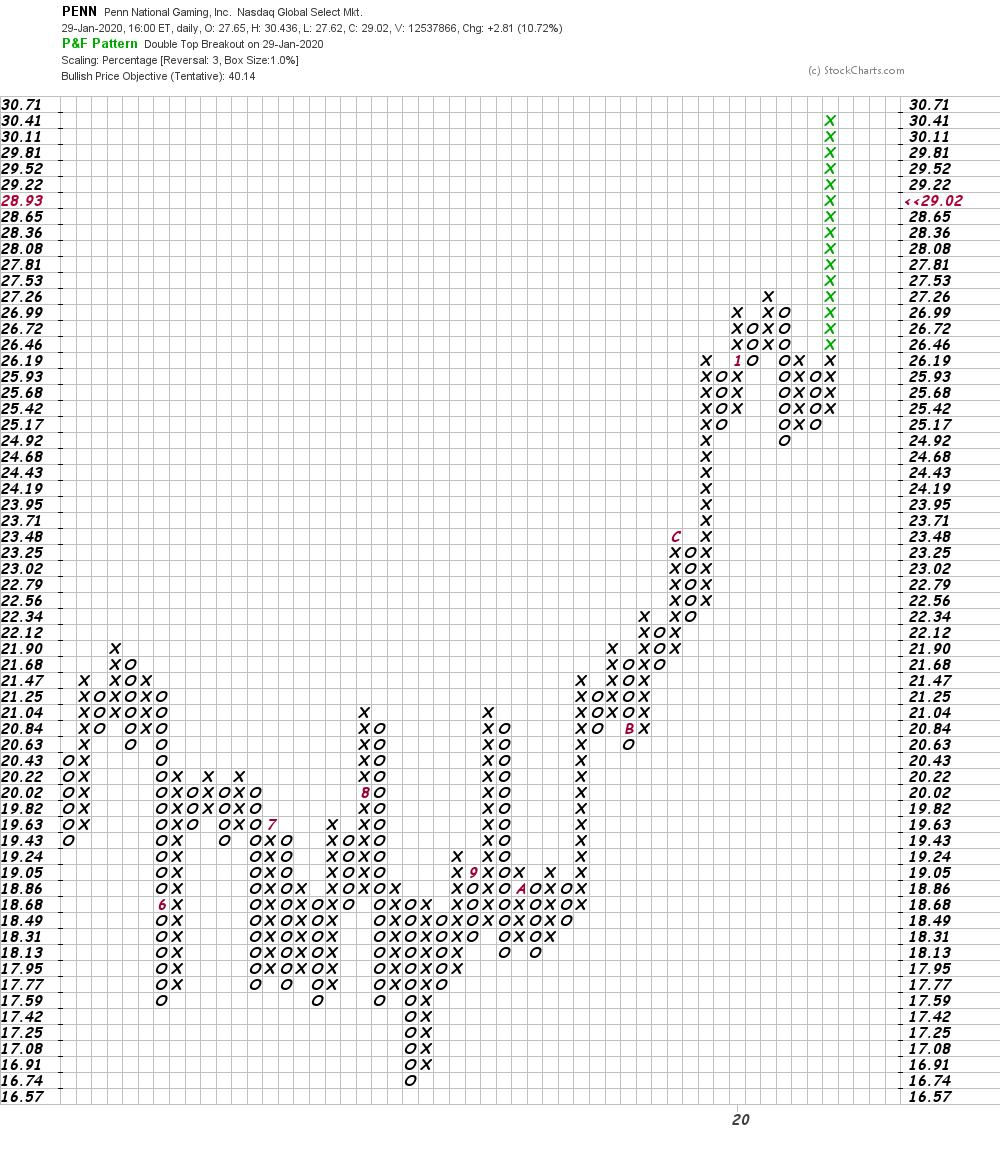 Bottom line strategy: After Wednesday's gap up and big high/low range we are likely to see prices trade sideways for several days or even a few weeks. Aggressive traders could nibble at PENN from the long side on available price weakness. Risk below $27 for now with $40 as our price target.

Get an email alert each time I write an article for Real Money. Click the "+Follow" next to my byline to this article.
TAGS: Mergers and Acquisitions | Investing | Stocks | Technical Analysis | Sports business | Gaming | Mad Money | Executive Interview | Real Money | Consumer Discretionary

With the VIX backwards, here's how to play the VXX.