Nvidia Corp. (NVDA) is the stock of the day at Real Money this Friday. After the closing bell Thursday Nvidia reported a fiscal first-quarter beat with revenue down 31% year over year. In-line second-quarter guidance has $2.5 billion-$2.6 billion in revenue (estimate: $2.53 billion) with 59.2-59.5% gross margin according to media reports.

Prices popped but the gains were limited after the graphics chip maker said it was no longer providing full-year guidance. Prices are still firmer Friday morning so let's see what the charts and indicators look like for this Action Alerts PLUS holding.

In the daily bar chart of NVDA, below, we can see that price declined sharply in the fourth quarter of 2018 -- dropping from above $285 in early October to short of $120 in late December. NVDA shares recovered toward $195 by April but stopped short of the underside of the declining 200-day moving average line. Relative to the broad market averages this recovery was extremely weak. Prices declined from April into May and the 50-day moving average line is cresting.

Trading volume does not show a bullish expansion from late December but the daily On-Balance-Volume (OBV) line shows a rise from January to early April signaling more aggressive buying. The OBV line, however, has been declining the past six weeks.

The trend-following Moving Average Convergence Divergence (MACD) oscillator crossed to the downside in April for a take profits sell signal and this month it moved below the zero line for an outright sell signal.

In the weekly bar chart, below, we can see that NVDA was a very strong performer up until October 2018. The slope of the 40-week moving average line has been negative now for several months and the rebound this year has failed at the underside of this longer-term indicator.

The weekly OBV line shows a retest of the 2018 high but not new highs and the MACD oscillator is rolling over from beneath the zero line for potential a fresh sell signal.

In this Point and Figure chart of NVDA, below, we can see a relatively nearby downside price target of $154 for this stock. A trade at $165.07 or higher may be needed to improve the picture. 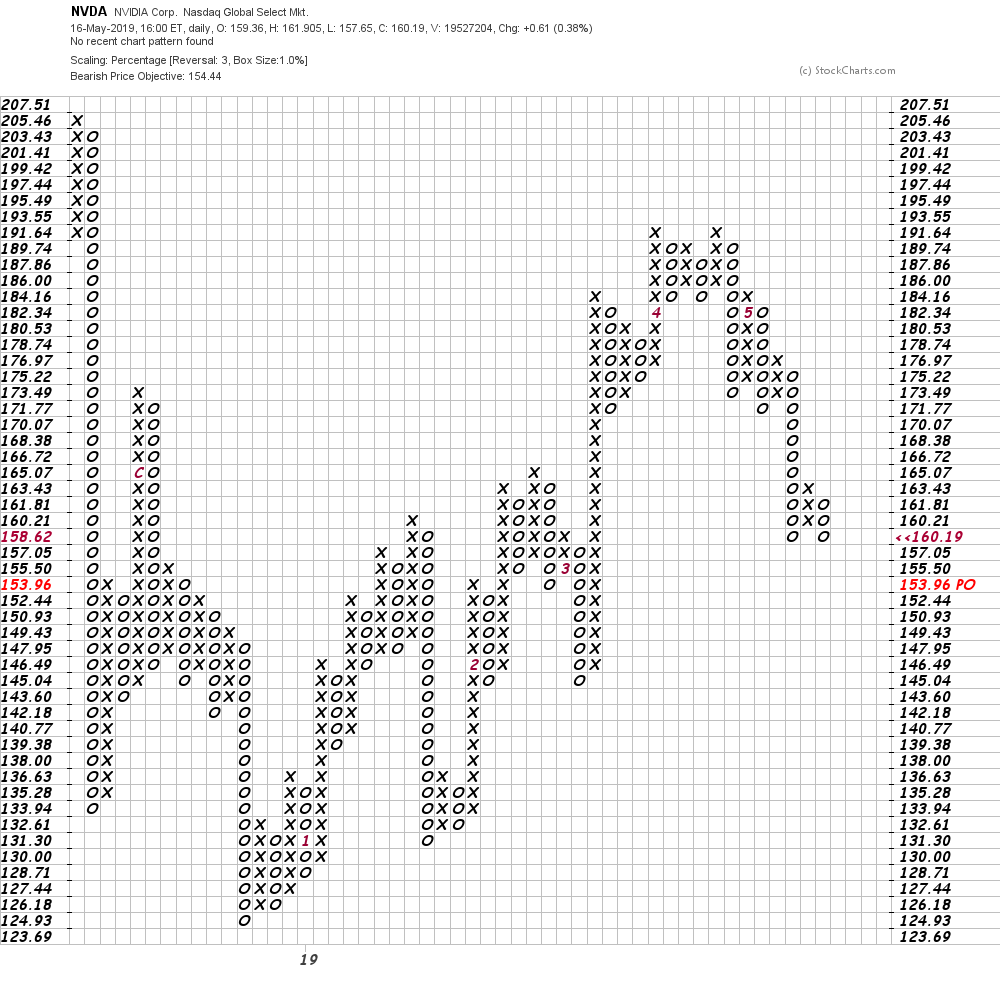 Bottom-line strategy: Two observations about NVDA tell me to remain neutral for now -- first the weak recovery from the late December low and second is that prices declined for the six weeks ahead of earnings.

Get an email alert each time I write an article for Real Money. Click the "+Follow" next to my byline to this article.
TAGS: Earnings | Investing | Stocks | Technical Analysis | Semiconductors & Semiconductor Equipment | Software & Services | Technology | Gaming | Stock of the Day