In a Real Money column Friday, our own Jim Cramer discusses the steel industry cycle and specifically Nucor Corp. (NUE) , one of the companies most benefiting from increased tariffs with China.

While some predicted a shortage of steel as a result, CEO John Ferriola said on Mad Money that ordering patterns have normalized and everyone who needs steel can have steel. Ferriola even dispelled rumors that steel prices would increase without Chinese imports. In fact, he said, steel prices are $100 per ton less than before the tariffs took effect.

Let's check out the Nucor charts too.

In the daily bar chart of NUE, below, we can see a clear pattern of lower highs and lower lows -- the simple definition of a downtrend. Prices are sandwiched between the declining 200-day moving average and just above the declining 50-day average line. Prices are up from their late May low but stalled, so far, around $56 -- the underside of a band of resistance from $56 to $62.

The daily On-Balance-Volume (OBV) line shows lower peaks from November signaling to us that sellers of NUE have been more aggressive for months. The trend-following Moving Average Convergence Divergence (MACD) oscillator recently moved above the zero line for a buy signal but has weakened again.

In the weekly bar chart of NUE, below, we can see that prices have been weakening since early 2018. Prices are just below the declining 40-week moving average line.

The weekly OBV line has been weak but shows an uptick in June. The MACD oscillator has crossed to the upside for a cover shorts buy signal.

In this Point and Figure chart of NUE, below, we can see that the software has projected an upside price target of $63.57, which if reached would mean that overhead resistance was broken. 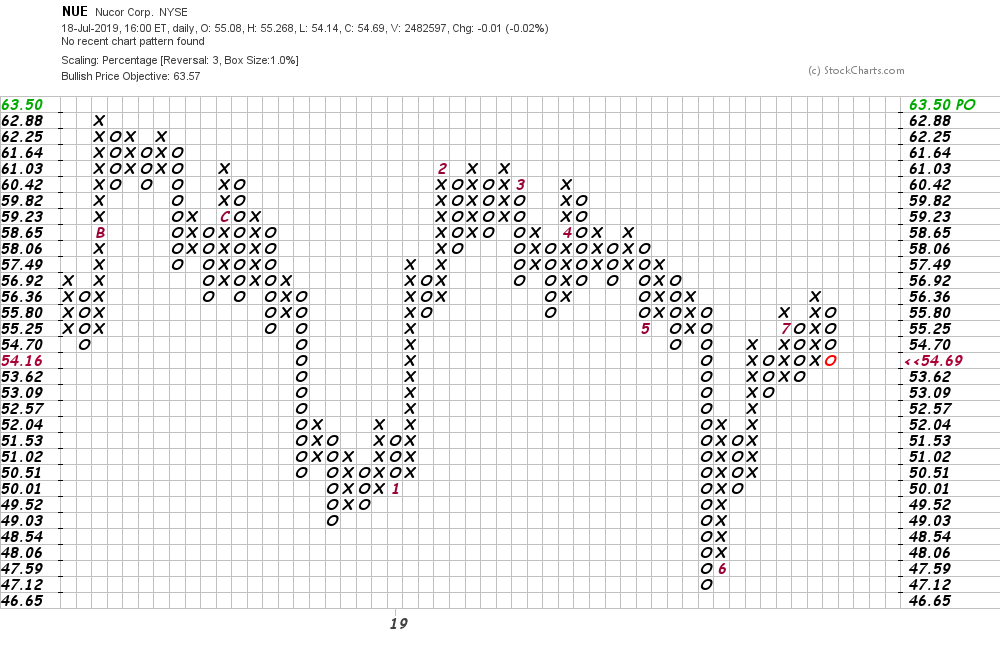 Bottom-line strategy: NUE has made a low in late May but I would not say it has made a bottom. Despite that, a trade at $56.92 will improve the charts.

Get an email alert each time I write an article for Real Money. Click the "+Follow" next to my byline to this article.
TAGS: Investing | Stocks | Technical Analysis | Metals & Mining | Industrials | Mad Money | Executive Interview

Insiders have started to make their presence known at the buy window.

I don't think this pullback is finished yet.

The current version of the doughnut purveyor doesn't resemble the business that JAB Holdings acquired five years ago.

Eli Lilly Is Going Strong: Here's How to Play It

Let's check out the LLY charts amid FDA approval of the company's Alzheimer's drug.