Monday was a bit of a Realization Day in the market. Folks sold but now they know WHY they are selling. It's like there is a laundry list of why to sell now, most of it based on the Trade War.

Many years ago when I worked on the Goldman Sachs trading desk I would so the same work I do here each day. When we would get close to an oversold or overbought condition and sentiment had turned, there was a trader who would watch for news and as soon as it hit the tape he would stand up and scream across the desk at me: Now we know. What he meant was the market has been going down (or up) and then some news hits the tape and we now know WHY we're selling off or rallying. Once you know why it's easier to quantify it. There is not so much that is unknown.

Monday everyone, regardless of discipline seems to now have a list of why we're down: Trade War; Lower earnings; Trendlines breaking; 50-day moving averages broken. You have your choice, don't you? Can it go on longer than anyone expects? It sure can but my work suggests we're heading into an oversold condition.

The McClellan Summation Index which is heading down (and therefore bearish because it means the majority of stocks are heading down) now needs a net differential of +3600 advancers minus decliners to halt the decline. Once it gets to +4000 it is extremely oversold.

Then there is the Nasdaq Momentum Indicator. This is based on price. I plug in lower closes for Nasdaq over the next week or so. In this case I took Nasdaq down almost 200 points. I look for the day/time period that the indicator stops going down and goes up. That is Thursday, May 16th. The date does not need to be exact but it tells you sometime right around then the market gets oversold.

Then there is my own Overbought/Oversold Oscillator. You can see on the chart it is pushing down toward the December low. This is based on breadth but here I calculate the 10-day moving average of the net breadth. The thinking is that we look back ten trading days ago to see what numbers we are dropping. When we're dropping a long string of red numbers we consider the market oversold.

Remember these are momentum indicators so to get more oversold we'd have to replace a red number with a bigger red number. Take a look at the numbers we're dropping through Memorial Day. This table shows you the NYSE but I can tell you that Nasdaq's doesn't look much different. 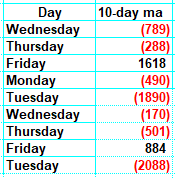 This is not to say the market is in fine shape. The number of stocks making new lows increased again on Monday and as noted above, many stocks and indexes broke uptrend lines. But we also saw 91% of the volume on the downside on the NYSE which implies there was quite a bit of selling done. In order to get an oversold rally you have to get folks to have sold. I still think we are set up for an oversold rally later this week.

Get an email alert each time I write an article for Real Money. Click the "+Follow" next to my byline to this article.
TAGS: Investing | Stocks | Technical Analysis | U.S. Equity