Three days ago, I said here that I heard a guy on television say that every stock has gone up. I disputed that fact by showing you several charts from many economically sensitive areas that had clearly not gone up; many have been down for the last few weeks.

Was it a Realization Day?

Oh, you know, that sort of day when something has been happening in the market and everyone ignores it until, well, they don't. And then they make like it's an epiphany they have had because they finally saw what has been happening under the surface. It's the day they realize either why we've been going down (or up) or even just that we have been doing it.

I point this out because one of those stocks we looked at was Caterpillar (CAT) , which bounced right off that line and managed to close barely positive on the day.

The other animal, Deere  (DE) did not bounce from any obvious level, but it too managed a big turn around.

In both cases, there is a lot of resistance overhead on the charts, but now that everyone has noticed how awful they have been, I am going to watch them for signs of follow-through from Thursday's action.

Away from that, I wish I could report to you that the indicators changed. They haven't. I could say that the McClellan Summation Index is rolling over and it now needs a net differential of positive 800 advancers minus decliners to halt the decline. But the reality is that it's gone down as much as it went up last week, which means it's still flatlining.

I could also note that the 10-day moving average of stocks making new lows has picked up, but that was the case a week ago, so there is no change.

What has changed is the Utes -- utilities. Just one week ago they broke out and I noted there is a measured target of 930 on them. And, quite frankly, everyone talks about the move in tech stocks, but have you seen the parabolic move in Utes? They are up an additional 3% this week, which makes it 7% since early January.

The Utes have been up 11-straight days and are knocking on the door of my target, not to mention this looks much more parabolic than tech stocks do (to me at least). They need a rest.

I want to end with a chart of the PowerShares QQQ Trust (QQQ) . The reason is the volume pattern is so curious to me. If we draw a line right at the October low, we can see that all of a sudden volume just sort of died. Look how lively the volume was from May to October. Look how there hasn't been one day over 40 million shares since the October low. 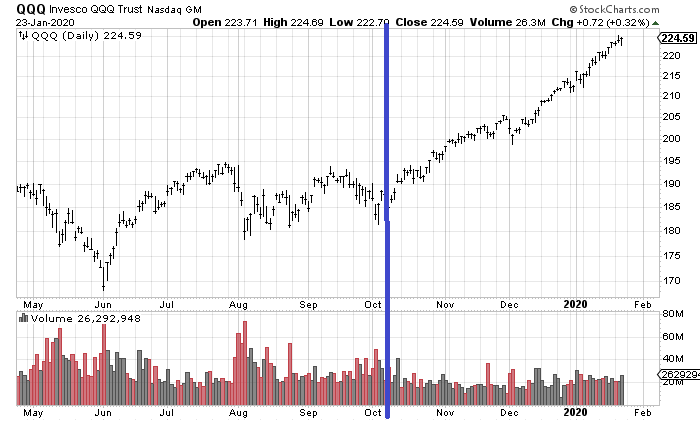 Yes, I have considered that the volume has moved to individual stocks, but when you look at a chart of, say, Apple (AAPL) , that doesn't seem to be the case. And in other market rallies, it has never been so pronounced. I am open to ideas as to why. Just because I find this so fascinating.

Get an email alert each time I write an article for Real Money. Click the "+Follow" next to my byline to this article.
TAGS: Bond Funds | Investing | Stocks | Technical Analysis | Utilities |