Unemployment is at a nearly 50-year low, the economy continues to chug along at about a 3% GDP annual growth rate, corporate profits are at a post-war record, and consumer spending (based on personal consumption expenditures, or PCE) is up on both a month-over-month and year-over-year basis. Yet we just suffered the single worst week in the stock market since November 2008, with the major indices down 7% to 8% in five trading days. As of here on Monday, this month is on pace to be the second worst December since 1931, and in the top 20 worst months of all time. All but three of the others occurred during the Great Depression. 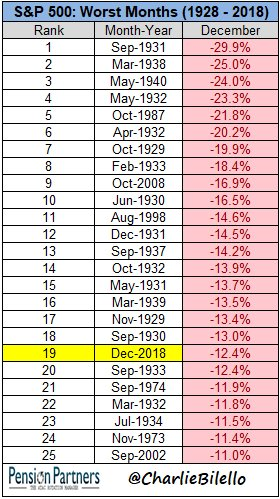 What the heck is going on?

There are some reasons for the market volatility that make sense. They include uncertainty with regard to the U.S.-China trade war; uncertainty about what caused the 40% drop in crude oil prices since October; uncertainty over the government shutdown; and maybe some confusion about the Fed's message this week, despite the certainty that it did hike the fed funds rate another one-quarter point.

Is it possible that one or more of these things throws our economy into recession? Yes, anything could happen. Is it likely? I don't think so. I believe there are too many things that can go right from here. And by right, I don't necessarily mean that great news is around the corner; I just mean that we may have very swiftly gone from a relatively calm market to one that is discounting the worst case scenario for all the aforementioned events.

Who wins if there is no U.S.-China trade deal? Not the American consumer, or companies -- and certainly not the Chinese. But there has been progress announced multiple times-by both U.S. and Chinese authorities-since the G-20 meeting in Buenos Aires last month.

Who wins if oil stays down below $50 a barrel after it sat near $80 just three months ago? The consumer of oil and gas, for sure, but the economic impact to the U.S. economy of too-low oil was already seen in 2015, and it was a near disaster. Saudi Arabia just released its fiscal budget for 2019 and it assumes around $85 oil; in spite of anything you've read to the contrary, the Saudis very much still set the price for oil. And they don't just want it higher, they need it higher.

A government shutdown? We've been here before, what feels like a dozen times. Any shutdown is unlikely to last long or have any material impact on our economy or markets.

What did the Fed actually say last week that spooked markets? First, Fed Chairman Jay Powell was put into a nearly impossible position by President Trump. Was it reasonable to expect Powell to handle an impossible situation perfectly? President Trump all but dared him to raise rates, letting the world know his feelings in advance of the Fed decision, that the Fed already had raised rates too high. Now, the Fed is a notoriously apolitical institution, and I don't believe this has anything to do with why Powell and the Fed stuck to their guns and raised rates this week. They did so, as he clearly outlined in his statement, because the economy is strong. The economy is strong.

However, the Fed did bring down its estimates for 2019 rate hikes from three to two, and made it very clear -- with even more clarification from Fed member John Williams here on Monday -- that it was not ignorant of stock market volatility and that it would continue to watch developments whie maintaining flexibility with its plans for next year. The Fed's goal, Williams stated unequivocally, is to keep the economy on its path of growth and to maintain maximum employment.

So, if all of that is true, why does it feel like the market doesn't believe it? Well, there is an old saying that "nothing changes sentiment like price," which means that with high prices comes excitement and enthusiasm. With low prices comes fear, anxiety, even panic.

I've referenced the CNN Fear & Greed Index many times, and weekly readings below 20 are rare. Below 10 is almost always a buy signal. Below 5 is something I can't recall seeing before. Below is Monday's reading....

This came with a VIX spike above 30. As a reminder, the VIX most easily can be explained as a fear gauge for the market; essentially, VIX measures how much people are willing to pay for protection from a further market fall.

All four of the circled areas before Monday marked notable lows for the stock market.

There are already headlines crossing the newswires that the government may have a deal to avert a shutdown, though I personally think it is the least concern of all of the concerns outlined above. But it is one.

Will we get a U.S.-China deal over the weekend? Unlikely. But there is certainly room for improvement in the dialogue. Both sides want a deal, and both sides are likely to make some concessions. They may not advertise it that way to their respective constituencies, but it's the most likely outcome in my opinion.

If you're wondering if there was a better place to have had your money over the last three months, the answer is yes. Utilities, cash and gold are about it.... 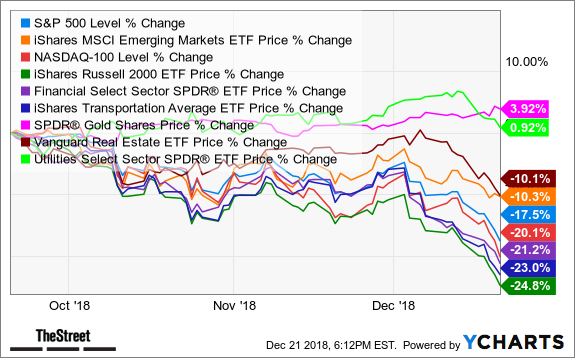 Other asset classes that have held up relatively well are REITs and, believe it or not, emerging markets-though both are down more than 10% so far in the fourth quarter. Seeing everything move down together may not be much solace, but it should be. One similarity shared by durable market bottoms is a high correlation of all asset classes to the downside.

While no one can say when the most optimal time to be buying stocks will be, history says we are very close to it, if not there already. One thing I am sure of is that this is not a good time to be selling.

Get an email alert each time I write an article for Real Money. Click the "+Follow" next to my byline to this article.
TAGS: Economy | Federal Reserve | Investing | Markets | Stocks | Real Money

Our Updated Strategy as AbbVie Finally Breaks Out to New Highs

The bulls are back in charge.

We're Charting the 3 Online Sales Leaders: Here's How to Trade Them