By now almost everyone has heard of Novavax Inc. (NVAX) . Earlier this year, this clinical-stage vaccine company was a single-digit stock. Heck, as recently as mid-May these shares were trading with a handle in the mid-teens. Then, kaboom! The hunt for a vaccine in the Trump administration's race against the Covid-19 virus intensified. The shares were off to the races. They still are.

The reference is to the measure of speed at which starships are capable of traveling in the fictional world of "Star Trek." In the real world, the reference is to the Trump administration's efforts to compress all the steps necessary to achieve mass production of safe and effective vaccines into a matter of months rather than the usual years. The administration has named former GlaxoSmithKline GSK executive Moncef Slaoui and U.S. Army General Gustave Perna to lead this campaign.

The whole ball of wax revolves around taking steps such as clinical trials and mass prediction in parallel rather than in order so that if one or more of the many vaccine candidates actually passes final muster all logistical obstacles already have been removed. The U.S. government is doing the financing through grants meant to ensure that money is not an issue, and big names such as Johnson & Johnson (JNJ) , Merck (MRK) , Pfizer (PFE) and AstraZeneca (AZN) are all involved, as is unproven biotech Moderna (MRNA) .

Early Tuesday morning, news breaks. Batter up. Novavax, a smallish firm (relatively) that regularly prints quarterly bottom-line results in negative numbers and rarely shows revenue growth on a year-over-year basis, has been awarded $1.6 billion (with a "B") from that Operation Warp Speed program to further develop and produce its own experimental vaccine.

Is Novavax worthy? Well, its idea is different, which is why this is interesting and why the name merits the program's attention. As a trader, NVAX options have treated me well in the past.

Novavax is a U.S. firm, based in Maryland. It has operations that it either runs or works with in Sweden and the Czech Republic. The Trump administration wants the vaccine manufactured here in the U.S., and in size, prior to the end of the year. This is what is so different.

The vaccine candidates that currently seem the closest are of the Messenger RNA variety. This would be the versions that Pfizer and Moderna are working on. Unproven technology that would provide unpredictable immunity for unknowable duration. The need is to cast a wide net here, as it has become quite obvious that the nation has a real problem on its hands and that for a large number of citizens the asking of some small measure of respect for others and self-discipline is clearly asking way too much.

There is the old and more proven way of developing vaccines, namely through the use of a weakened version of the virus itself. Merck is known to be developing a leading candidate of this variety. This is a more sure way to get the job done, but unfortunately cannot be developed as quickly nor mass produced in numbers the way the Messenger RNA candidates can.

Novavax is a little late to the game, just starting the earliest human trials in May. Novavax grows its vaccine candidate in insect cells. This process takes about a month. The candidate then must be purified prior to any kind of mass production.

The candidate in application must be used with an adjuvant that boosts the body's immune response to the virus itself. So, it's a bit complex, but promising.

Data from animal testing show a strong immune response. This candidate goes into Phase 1 trials within a week or so. A similar trial has been underway in Australia. By compressing the process (starting Phase 3 with 30,000 subjects this autumn) and bringing the ability to manufacture both the vaccine and the adjuvant home to the U.S., Novavax hopes to provide 50 million doses a month in the U.S. by early next year, with 100 million already on the table by January.

Yes, a lot has to go right. This is one more arrow in the quiver. We may need to have a few. 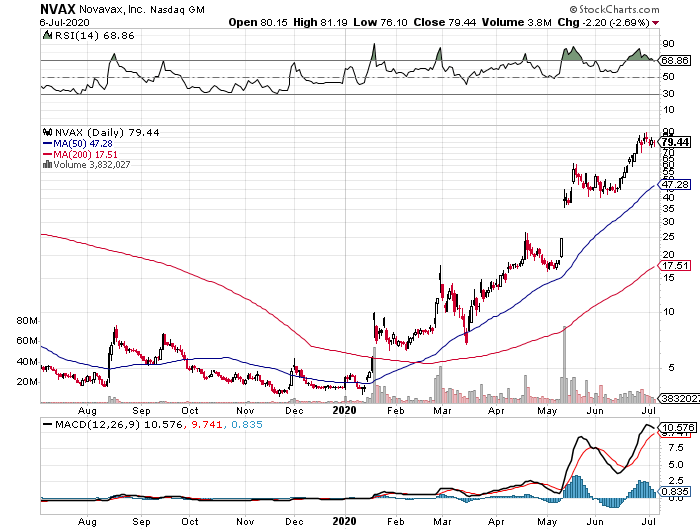 Novavax shares were trading with a $105 handle about 90 minutes ahead of the opening bell. I had seen them top out around $117 earlier. I thought about shorting the name in the one-teens, but then also thought about writing this piece. I never take or amend a position ahead of writing an article if I am already thinking about writing the article. The only exception might be if I have already made a trade and then get a request for an article on a specific name. That was not the case here on Tuesday. Such is life.

My thinking remains that if I see the shares trading in between $110 and $117 (or higher) after the opening bell, I may still take that same shot for fun.

You know, $1.6 billion is a lot of dough. Still, I think the therapeutic cocktail Regeneron (REGN) is working on in collaboration with Sanofi (SNY) is a better investment. Novavax is a trade. I would expect a lot of volatility in NVAX options today. This could be one of the few times where a long straddle or long strangle might make sense. We'll need to wait for pricing based on the price of the underlying equity before making that decision.

Get an email alert each time I write an article for Real Money. Click the "+Follow" next to my byline to this article.
TAGS: Investing | Stocks | Biotechnology | Pharmaceuticals | Real Money | Coronavirus