For nearly two weeks, I have said that as long as the indicators continue to rise and avoid rolling over, the market gets the benefit of the doubt on the upside. And until late last week the indicators were mostly still rising.

But with last Friday's reading of 97 new lows on Nasdaq, which was preceded by a reading of 91 new lows on Thursday, the 10-day moving average of new lows is on the rise. Why is Nasdaq at new highs, with nearly 100 stocks making new lows?

The McClellan Summation Index until midweek last week threatened to, but never did, roll over. Now, the New York Stock Exchange's Summation Index has rolled over. It won't take much to get it back in gear on the upside -- a net of positive 600 advancers minus decliners on the NYSE -- but it is no longer rising.

Ever since the early October low, breadth had been terrific, leading the way. In mid-October it made a higher high, even though the S&P 500 refused to do so until later in the month. That's bullish. But it is almost as if the calendar turned to November and that relationship flipped: The S&P kept going and breadth stalled out. Breadth is no longer leading the way. 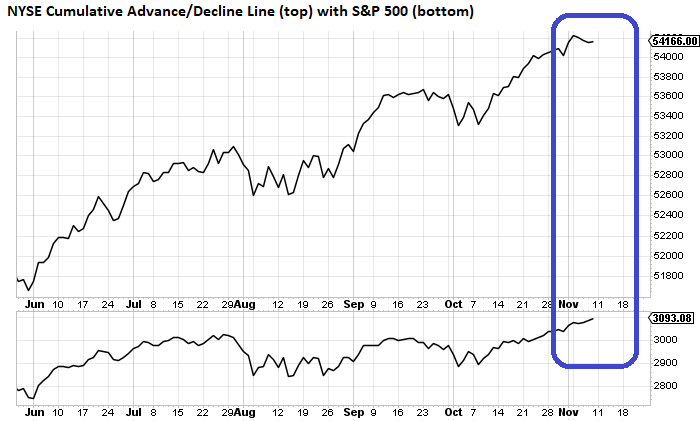 Sentiment-wise, we see the 10-day moving average of both the equity and total put/call ratios getting awfully low, indicating a high level of complacency. I thought we'd reach a level of giddy or euphoria, but we have not achieved it yet. The Daily Sentiment Index came close to 90 for Nasdaq, but never got over it. It now resides at 80. So it's high and complacent, but not too high. For perspective, it got over 90 in July.

The Citi Panic/Euphoria Model finally moved up in the last week or so; it is now over neutral, but it is not close to Euphoria. Not yet at least. 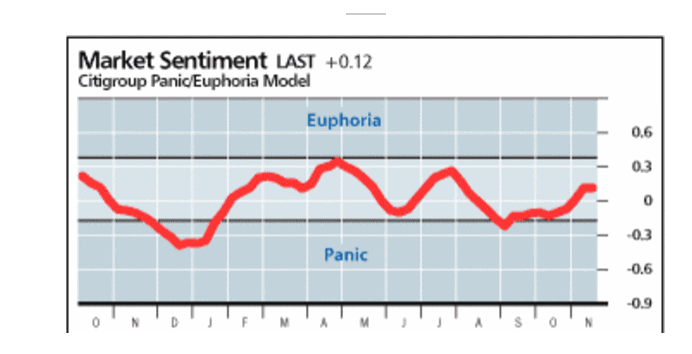 So we're starting to see some divergences, but it's not straight across the board. I suspect if we saw a down day, we'd see a lot of the complacency get wrung out in a hurry. I also suspect if the Russell 2000 made a new high, we'd see Euphoria in a hurry.

As for bonds, they are now quite close to some decent resistance on yield on the 10-year Treasury note. The downtrend line and the prior low come in right around here at 1.90%. The Daily Sentiment Index is at 26.

With bonds, if it gets under 20 it's gone too far. That tells me bonds are getting close to a rally. With the bond market closed on Monday, we won't get a chance to see how bonds react until the middle of the week. One more move up in rates and down in price would get sentiment to an extreme. And give the banks a much-needed rest.