As soon as the growth stocks rally, folks feel better about the market. But if industrials, energy or commodity names rally, folks scoff. If the likes of Roku (ROKU) , Roblox (RBLX) and Netflix (NFLX)  rally -- they feel better.

How can I tell?

Well, mostly it's anecdotal. But the put/call ratio fell to .83 from 1.0 last week. Curiously, it is also the lowest reading since the recent mid-March low.

In any event, the market rallied as it should have. But the rally was heavily concentrated in the index movers, which means breadth was terrible. It was at best flat most of the day, but ended notching slightly positive. The New York Stock Exchange upside volume (as a percentage of total volume) was 66%, but that compares to 71% on Friday. So you can see the either/or market was back in action Monday.

Despite the relatively poor showing in breadth the indicators haven't changed yet. It will take weaker breadth for more than a day to turn the indicators.

Now, consider this. I was asked: What if by the time the indicators roll over, the indexes are already down? I, too, fret that there won't be an early warning. But in the past, we saw enough weakness under the hood to watch the indicators weaken before the indexes weakened, so I will have to trust that will occur again. If it doesn't, then I will be wrong.

In the meantime, you will see the Overbought/Oversold Oscillator ticked back up. Since this is the 10-day moving average of net breadth, and I look back to see what we're dropping to figure if we're overbought or oversold, I feel compelled to let you know that the numbers we are dropping in the next 10 days are mixed. We have six positive days and four negative days and only a few times are the positives or negative consecutive. For Nasdaq, it's five and five.

What does all this mean? The Oscillator is unlikely to be terribly helpful in the days ahead. It screams chopfest.

If I use the 30-day moving average of net breadth for an intermediate-term oscillator, it's a bit smoother in that there is a lot of up and down, but no real sign of overboughtness for a couple of weeks. 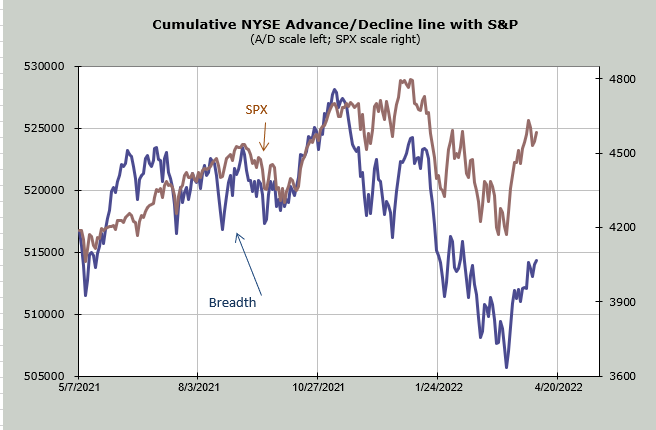 What this means is that as long as breadth is heading in the upward direction, we give it the benefit of the doubt, but we are aware that there is the potential for a larger negative divergence when we do get to an overbought reading. I still think this is a trading market, not one to get comfortable in.