The polarizing action in retail continues.

Macy's (M) as an anchor dragged retail into the depths of the water this week while Nordstrom (JWN) is working on keeping things afloat, steady, and in place.

Nordstrom ended the weak week with a retail high note reporting earnings of $0.81 per share on revenue of $3.672 billion. While revenue slightly missed the mark, EPS cruised past estimates of $0.64.

Nordstrom did a fantastic job of expense control and inventory management as well as recognizing merchandising trends. For the full-year, management targeted EPS between $3.30 and $3.50 against a consensus of $3.29. That puts the midpoint ahead of estimates by $0.11 and raises the low end of management's previous guidance by a nickel.

Similar to Macy's, it shows a little potential softness in the fourth quarter. However, unlike Macy's, it also shows the potential for upside. The upper end of the range equals a small Q4 beat while the lower end would be a disappointment. So, Nordstrom dangled all the potentials (miss, beat, in-line) for Q4. That's enough optimism for the shares to recover what they lost earlier this week.

The company is pursuing the same multi-armed strategies as we're seeing across most of traditional bricks-and-mortar, especially those that survive within the confines of a mall. For Nordstrom that includes Full-Price, Off-Price, stores, and online.

The difference between anchors comes down to execution and inventory along with in-store experience. Additionally, digital marketing, including loyalty programs and rewards points, are helping to attract and anchor customers. It's become the go-to method of customer touching.

During the first nine months of the year, Nordstrom repurchased 4.1 million shares at an average price of $43.37. Ouch. Authorization remains for another $707 million in repurchases, or roughly 20 million shares. While that's not likely to be done all at considering the company spent a little less than $200 million during the first nine months, management does have the firepower and authorization to scoop up more than 10% of the company at the current market value if they choose to do so. It should help create support above $30. 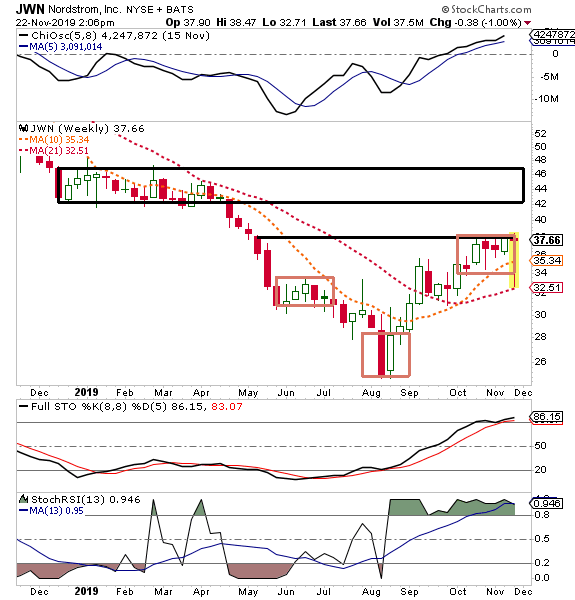 The weekly picture above is much stronger than other anchors. Yes, Nordstrom is a little extended from the August lows, but there's an inverse head-and-shoulders in play here.

The right should probably do in the September-October time frame meaning we've already broken out, but I wanted to look at that $38 resistance. Above that level and I believe we've run into the $42 to $46 area, which will become a new trading channel.

If we regress to the $35 area, I'd be on edge. This week's low does serve as secondary support, coincidentally the 21-week simple moving average.

While I'm not ready to jump in on the long side today, a push above $38 will have me looking long with an upside target of 10% to 15%.

This isn't a name I'd consider actively on the short side. There's plenty of weaker choices in the retail sector for that.

Get an email alert each time I write an article for Real Money. Click the "+Follow" next to my byline to this article.
TAGS: Investing | Stocks | Technical Analysis | Trading | Retail