I guess we all have our answer to what happens when sentiment gets so stretched as it has this week. It used to be the market would get overbought, sentiment would get somewhat extreme and the market would correct and it would do so gently. A normal pullback that took place over days would be enough to make the charts pullback and map out patterns.

But now we get so extreme that when the correction comes, it is not just a rug pull, it's an earthquake. Let's examine the sell off.

The first thing that is notable no one even fussed over: the S&P 500 had its first three-day losing streak since late February. That is a change in pattern. The next is that breadth had its worst showing since the March decline: 98% of the volume was on the downside on the New York Stock Exchange. That is often considered a short-term extreme, enough to lead to a short-term snap back rally.

Then there was the rise in volatility. Just a few days ago, folks were praising that the Volatility Index was 25. Well now it is 40. Even if it backs off from here it ought to have one more try higher; that's just the way the pattern tends to play out.

Then there is the fact that the volume in the QQQs was the highest in a month. And the QQQs are now at, or near, an uptrend line. 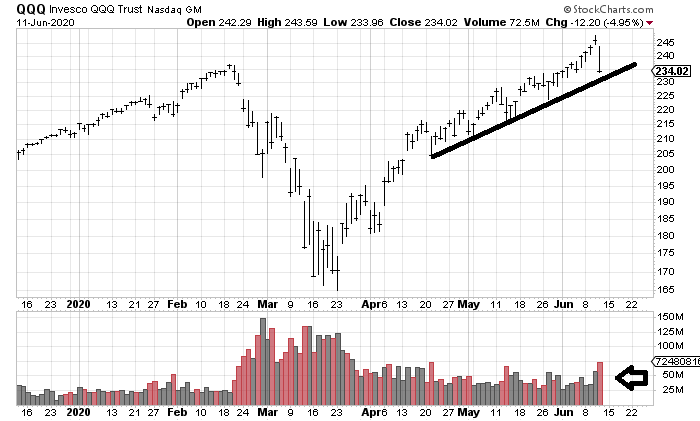 Lest I forget that the 200-day moving average of the S&P sits right here at this big round number of 3000. These are all the reasons we ought to see a bounce either Friday or Monday.

But the S&P has left an island overhead (black box). If it cannot fill that gap at 3200 that's a negative. You can see the island it left in early April (green box).

Then there is the breadth. I don't have to tell you how bad it was because it was the worst we've seen since March. And it was enough to make the McClellan Summation Index stop going up. As I explained earlier this week, to see real deterioration we would need to see the indexes stage a rally and breadth to lag enough to get this indicator to rollover, showing failing rallies (deterioration) underneath.

There is also the matter of sentiment. In the middle of May, the last time we had a whack in the market of any matter (and the last time the volume in the QQQs was so high, the put/call ratio zipped right up to 117%. Thursday it limped across the triple digit line to 101%. After the bullishness we've seen of late, I'd call that a tepid change in sentiment.

But I would also note that the 30-day moving average of the equity put/call ratio was much higher in mid-May as opposed to where it is now, which is back where it was in February. The 10-day moving average hasn't budged. That probably means we're in for more volatility and perhaps we'll even see some deterioration underneath if we do get a snapback rally. All Thursday did was prick the excess in my view.

Note: Meisler will be on vacation for the next week. Her next column will be Monday, June 22.