Another day, another record close? At least for the Nasdaq Composite. Take it with a grain of salt? Not exactly. There certainly are bigger fish to fry.

This Friday will bring with it the Bureau of Labor Statistics' employment data for the month of August. That jobs report will comprise most of this coming weekend's headlines from a macroeconomic perspective. Capital flows were certainly impacted on Monday by some end-of-month mandates. Window dressing meets reallocation, and let the chips fall where they may? Something like that.

So, we begin the month of September, historically the toughest month for equity markets, in the year of the pandemic, with a disfunctional legislature in an election year. The Federal Reserve Bank seems to get it, but can they dance with no partner, and without music? We may have to find out.

Yes, Monday may have seemed like just another day, as the major indices finished mixed. That said, the month of August was no ordinary month. and it would not be too far fetched to think that maybe some traders have become uncomfortable riding what is still clearly a market still engaged with a confirmed uptrend. Even if leadership has been rather narrow.

If one only looks at the Dow Jones Industrial Average, which was forced to undergo some digestive issues of its own on Monday, the day looked sloppy. The index still would have traded off for the day, had Exxon Mobil (XOM) , Pfizer (PFE) and Raytheon (RTX) not been swapped out of the DJIA for Salesforce (CRM) , Amgen (AMGN) , and Honeywell (HON) , but not quite so decisively. The market story is really about the other two major indices anyway.

The deal is this. Aggregate trading volume across Nasdaq Composite constituent corporations still failed to reach its own 50-day simple moving average (for trading volume), and has not done so since late July. Aggregate volume across the S&P 500 did manage to top the 50-day line, for the first time since July 31, the last trading day of July, and for the second time since June 30. Hmm, I see what you're getting at, Sarge. The trading volume for some of these days is at least to some degree, baked in. It's a matter of re-balancing, which could help explain a selloff on the last day of the best August since 1986.

What does that mean?

Well, yes, but to some degree forced which is different than say if it happened in the middle of an unspectacular month. What happens from here, how September digests August ahead of momentous events will be far more important to uptrend maintenance than how August closed.

One thing we do know is that some professionals are more active in seeking downside protection. What we do not know is if these bets against broad equity market performance are a hedge against a traditionally tougher month ahead, or a hedge against the last third of the year, encompassing everything from electoral outcomes to continued legislative failure, to disappointing results across vaccines and therapeutics meant to combat Covid-19.

To stay expensive, both fiscal and monetary policy must remain loose. Money supply must grow, and the U.S. dollar must continue to soften. There is some help on that last front this morning as positive headlines produced by the German economy have strengthened the euro.

Readers will note that the VIX has lifted its ugly head of late, and retaken it's own 50-day SMA, even as a strong month for equities closed. Now, take a look at this.

Charting the CBOE Total Put/Call Ratio presents as very similar to the VIX in appearance, also taking that blue line. Now, what if we exclude single stock options from the total?

Whoa. Now, that's a bit telling. Isolating only index-related options trading at the CBOE, that Put/Call ratio is trading back near the highs of the month, having retaken not just the 50-day SMA, but the 200-day SMA as well. True, this measure is always volatile. Do we become concerned? I think we do if this ratio threatens the 1.60 level that has not been pierced since late July.

The potential TikTok deal appeared to become far more complicated over the weekend, as the Chinese government published rules that would govern the sale of various technologies to foreign purchasers. All three of the most often mentioned large-cap names as being interested, that being Microsoft (MSFT) , Walmart (WMT) and Oracle (ORCL) sold off on the news. This news changed, or evolved -- sort of. Walmart for one, reversed course and while still down for the day. closed at the top of it's Monday range.

Reports circulated late Monday that ByteDance, the Chinese parent of the TikTok app that already stated the intention to comply with Beijing's order, has selected a "winner" in a deal to sell the app's U.S., New Zealand, and Australian operations. What does it trade for? I have seen numbers everywhere between $20 billion and $40 billion. What is it worth? I don't know. I do not have this app on any device that I use.

As a shareholder of both Microsoft and Walmart, this is where my rooting interest is. Remember, Microsoft is an investor in Flipkart, which is a Walmart owned e-commerce rival to Amazon (AMZN) in India, so there is some history of cooperation.

When do we hear something? Rumor is that we hear who won the bidding war for TikTok early this week. On Beijing blessing the deal so it gets done? That could be more arduous.

Now, that we mentioned Amazon, we might as well go there. It does not take much to get me started on Amazon as you know. As we know, Amazon is king of two realms that have dominated the pandemic lifestyle: e-commerce where it competes directly with Walmart, and cloud computing where the number two is Microsoft.

You may have noticed on Monday the company announced certification by the Federal Aviation Administration granting permission to begin trials using drones for the purpose of commercial delivery in the U.S. Amazon's plan is to use "Prime Air" to reduce delivery times to less than 30 minutes where possible, and to do this safely. The idea is not new. Amazon has been working on this technology for seven years, and both United Parcel Service (UPS) , and Alphabet (GOOGL) already have such certification. 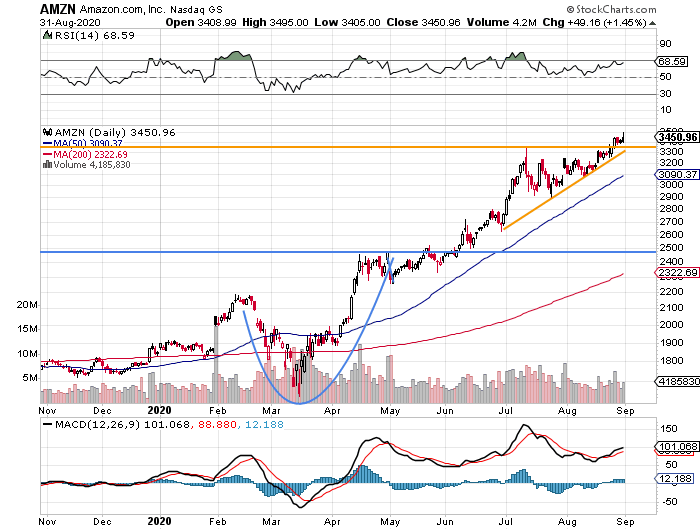 For Amazon, the trend remains in place. The most recent breakout created by the closing of the ascending triangle in late August appears to at least found some support at that pivot over the past week or so.

Get an email alert each time I write an article for Real Money. Click the "+Follow" next to my byline to this article.
TAGS: Economic Data | Federal Reserve | Indexes | Investing | Jobs | Markets | Politics | Stocks | Trading