By TIMOTHY COLLINS Aug 20, 2021 | 12:19 PM EDT
Stocks quotes in this article: MUDS, TSLA, AMC
Life comes at you pretty fast, the stock market included.
I'm sure that is what Ferris Bueller meant to say. 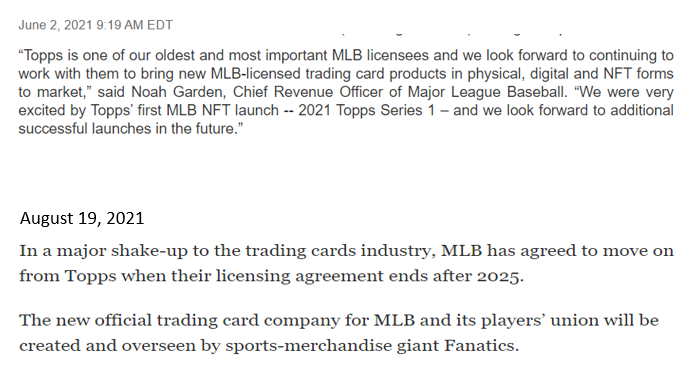 One minute you're up a half million in Mudrick Capital Acquisition Corp (MUDS)  and the next, boom, your kids don't go to college, and they've repossessed your Tesla (TSLA) .
-Lou Winthorpe IV
That take may be a little extreme, but two days ago, I, along with many others, were singing the praises of The Topps Company, the acquisition candidate for MUDS. Then, Thursday, shortly before the market closed, Major League Baseball dropped a bombshell. After 70 years, Topps would no longer have a deal in place to produce Topps Baseball Cards. Instead, Fanatics will be taking over the exclusive license.
Here's the thing: MUDS was a fundamental investment thesis for me. I wrote a few days ago how poor the technicals looked, but I did like the fundamentals of Topps after its most recent earnings report. Now, that fundamental thesis is dead. It's not just that Topps will lose MLB, but MUDS terminated its intention to buy Topps.
What does that mean?
MUDS is back to being a SPAC in search of a target.
Now, I have to ask if I want to own a SPAC, trading slightly under net asset value (NAV) with a management team that has one de-SPAC name that has traded terribly and was active in AMC Entertainment ( AMC) and public about it. Neither of those two things worked out well nor did the Topps deal.
I could sit in MUDS, likely only giving up opportunity costs with the money as the NAV, net of expenses and fees, should be around the current price or a bit above it, but I would have to strongly believe in management. I don't.
There are plenty of SPACs out there, trading around or below NAV that I could buy instead if I really want an NAV deal. For me, I'm bowing out of MUDS. The good news is the NAV protected much more downside. If this had happened post-merger, I bet MUDS would be trading down 40% to 50% now, so being down 2.4% is a "win" in a losing situation.
While I'm not happy taking a loss, this could've been much worse. For me, there's not enough here to stay with the name. I'm closing my position and removing the ticker from my screens.
*The excerpted quotes above were from StreetInsider and the Washington Post.
Get an email alert each time I write an article for Real Money. Click the "+Follow" next to my byline to this article.
TAGS: Entertainment | Mergers and Acquisitions | Investing | Options | Stocks | Sports business