Note: Real Money's Doug Kass and Helene Meisler will be on Twitter Spaces together to discuss markets, starting at noon ET on Monday, Dec. 12. Please join in!

There are many who have tried to explain it by noting that now with daily options, the options market no longer reflects a hedge as it used to. Since I am no options expert, I can only report this to you.

What I can, however, show you is that there is a massive divergence in the options ratios. If we look at the 30-day moving average of the equity put/call ratio, we discover that it is at .82. The last time it was this high was during the March 2020 Covid crash. I think we can all agree that the market over the last 30 days has not resembled the market of March 2020.

If you move your eyes further to the left of the chart, you can see two other peaks over .80. They were both in 2008. The higher peak was in the spring of 2008, almost coordinated with the Bear Stearns low. OK, it makes sense, right? Just to the right of it we see another peak and that came in late November 2008. Most probably won't recall, but we had quite a rally from just before Thanksgiving with the S&P at 750 until early December. We rallied 20% in a week. Coincidentally, I do not recall anyone referring to that rally as a new bull market.

But the market did not fall apart in December 2008, but rather meandered sideways and peaked up nearly 25% off that late November low during the first week of January 2009. Then it headed down again.

All of this begs the question: If folks are that bearish on individual stocks right now, then why is the 21-day moving average of the put/call ratio for exchange-traded funds back where it was in early November 2021? Am I really to believe folks are so bearish on stocks that they are buying puts with wild abandon and at the same time calls on ETFs? I can't buy that. Thus my conclusion that something has changed in the equity options market.

I would be happy to say it is the daily options, but those started in the spring, so why is it only in the last few weeks we're seeing these incredibly high readings? I am open to an explanation. 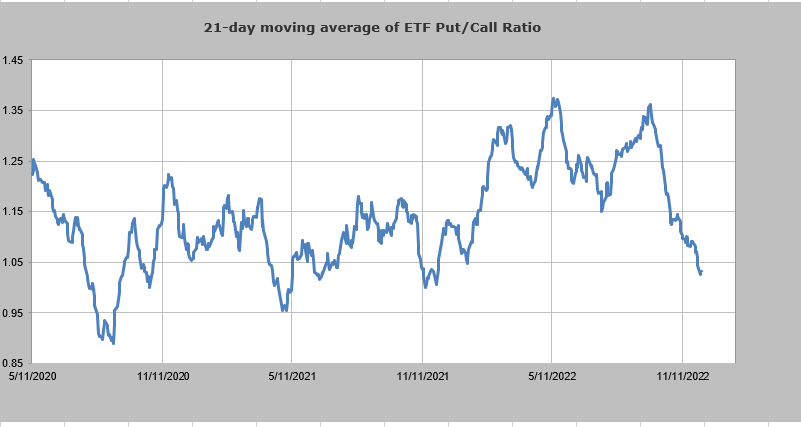 In any event we got a small rally that was centered in tech stocks, which is probably why folks feel better, because as we know when tech rallies folks feel better. The Oscillator continues to work its way lower, so at this point it still seems to me that we can get bounces (maybe the producer price index on Friday comes in better than expected?) but we are not sufficiently oversold to go anywhere special on the upside.

One final point is that the Daily Sentiment Index (DSI) for the Volatility Index is back to 19. Recall just a week ago it was 15, so if we rally much more from here this metric will slip right into the warning zone.

Get an email alert each time I write an article for Real Money. Click the "+Follow" next to my byline to this article.
TAGS: Investing | Options | Stocks | Technical Analysis |