There was a little shift in sentiment, not a big one. It did seem as though in the early going folks would get too bullish too quickly, but they eased off by the end of the day. By that I mean the put/call ratio went down to .76, which is the lowest since Jan. 3. Had been sub .70 in the morning and had it closed under .70 I would have thought far too bullish too quickly. Now I'll just call it a shift.

What surprised me most was that breadth was so strong. I had not expected that a rally led by the big cap-tech stocks would allow other stocks to rise as well, but breadth was the best it has been in weeks and 83% of the volume on the New York Stock Exchange was on the upside.

That means that the good breadth that we've seen since just prior to Christmas has kept itself going. It also means that the McClellan Summation Index is still rising. And it has crossed the zero-line for the first time since mid November. Remember when the Summation Index is heading up it means the majority of stocks are heading up and vice-versa. It would now take a net differential of net negative 1,100 advancers minus decliners on the NYSE to halt the rise. 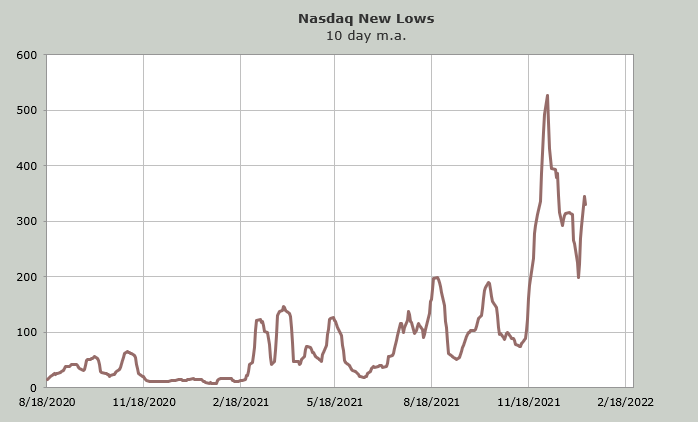 Let me say a few words about breadth in general. Overall, it is still nowhere near the peak from November (that is overall bearish) but it has been solid for more than two weeks now (that is bullish). Overall I believe that peak in November is likely to stay in place for some time and therefore act as a negative divergence, but I am more interested in the market swings this year (as I believe we will see many more swings, not a steady up or downtrend) and for now the swing is upward.

On the negative side of the ledger is that the number of stocks making new highs, like breadth, is unlikely to increase to a reading that exceeds the previous ones, so that too will remain as a negative divergence. But as long as new lows are contracting that's the positive for now.

I would like to end by discussing the chart of the iShares MSCI Emerging Markets exchange-traded fund (EEM)  for the emerging markets. EEM crossed over its 50-day moving average line Tuesday for the first time in months. It also rallied right to a downtrend line that has been in place for nearly a year. There is resistance the entire way up, so there is no level that investors can say, "whew, all clear," but crossing a one year downtrend line signals the first step in forming a bottom. And that would be a change.

Just look at the ratio of EEM to SPY fund SPDR S&P 500 ETF Trust (SPY) (the S&P). That is one steep downtrend and a one way street for a year. I am very curious to see if it can change that trend.