Shares of Nike Inc.  (NKE)  have been weak recently as fears of a ratcheting up of trade tensions have influenced traders and investors worrying about the pace of future sales. Let's see what the charts and indicators tell us about points to watch out for in the near-term.

In the daily bar chart of NKE, below, we can see how prices rebounded from late December to April. We can also see a sideways pattern from February to now bounded by $90 on the upside and $78 on the downside. Thursday NKE closed below the rising 50-day moving average line and that puts NKE in "striking distance" of the rising 200-day line Friday.

The trading volume looks like it has slowed from late March and the On-Balance-Volume (OBV) line has stagnated since late April telling us that we have a temporary balance between aggressive buying and selling.

The Moving Average Convergence Divergence (MACD) oscillator crossed to the downside last month for a take profits sell signal. A decline below the zero line will tell us that the picture has weakened.

In the weekly bar chart of NKE, below, we can see the potential for weakness. NKE is still above the rising 40-week moving average line but a close $81 Friday will break the line.

Trading volume has declined this year and the weekly OBV line has not made a new high this year to match the new highs in price. This is a bearish divergence between price and volume and it is big enough to worry about.

The MACD oscillator has made a lower high in April than last October and is another bearish divergence versus the price action. Divergences do not give us well defined signals but ignoring their message is generally not a good idea.

In this Point and Figure chart of NKE, below, we can see a possible double top pattern at $89.07. An upside price target of $104 is shown but a decline to $80.63 will probably weaken this chart. 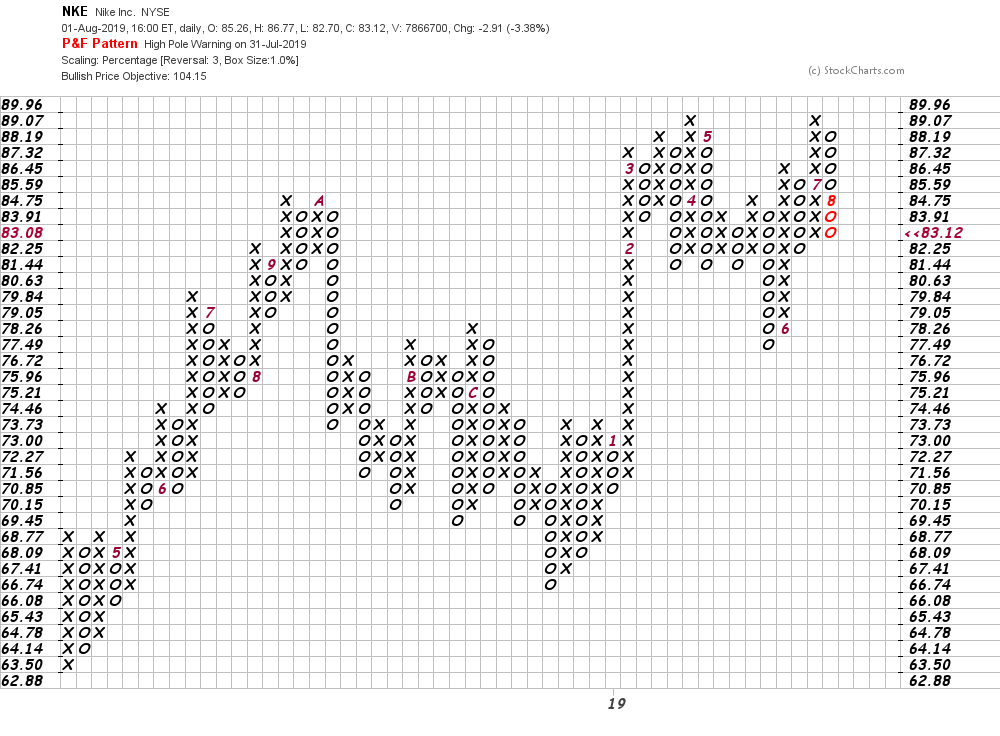 Get an email alert each time I write an article for Real Money. Click the "+Follow" next to my byline to this article.
TAGS: Investing | Stocks | Technical Analysis | Apparel | Sports business | Sports | Stock of the Day